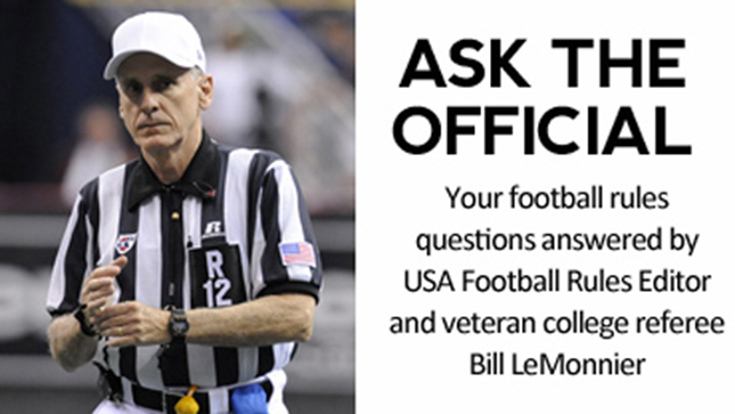 We had a situation come up this past weekend where we had the football and the down and distance was third-and-goal from the 14-yard line driving toward the end zone.

On the play, the defense received a 15-yard personal foul facemask penalty. Based on the call, we believed it should have given us half the distance to the goal and an automatic first down. The referee walked off half the distance but still kept it fourth down. He stated it was not an automatic first down as we were not more than 15 yards from the goal line. Therefore, we couldn't walk off 15 yards for the first down.

This was a youth football game using Ohio high school rules. Just wanted to see if this was accurate.

As described, the official was both right and wrong.

Under National Federation of High School Association rules (which Ohio high schools use), the only defensive penalties that carry an automatic first down are roughing the passer and roughing the kicker/holder.

So, in that case, the official was correct.

But on a live ball facemask penalty, the down should not have changed. Your team should have been awarded half the distance to the goal line from either the end of the run or the spot of the foul – whichever benefitted you most – and it remains third down.

The USA Football 11-player Tackle Football rules guide outlines the differences in rules enforcement for youth/high school, college and NFL. Feel free to download this and share it with your coaches, players, parents and administration.

We had a question at our eighth-grade practice last night that I can’t seem to find an answer for.

Is it legal to lift your leg to signal a receiver in motion while under center, or do you have to lift a heel, or is there a difference for being in shotgun vs. under center?

Neither the NFHS nor the NCAA rule book is specific in saying a QB can or can’t lift his leg to put a back in motion, but the interpretation at all levels typically allows for this whether the QB is under center or not.

The key in a false start penalty is whether the quarterback makes a motion that simulates the snap. Simply lifting and lowering the leg does not typically do that. Jerking the leg back might.

If the issue is a linesman believing two players are in motion when your QB signals his teammate, it’s typically solved with a quick conversation with a veteran official on the crew.

Your best course of action is to talk to the lead game official before the game and get a clarification from him. If you have a head of officials for your league, you can get an answer from him or her that covers everyone.