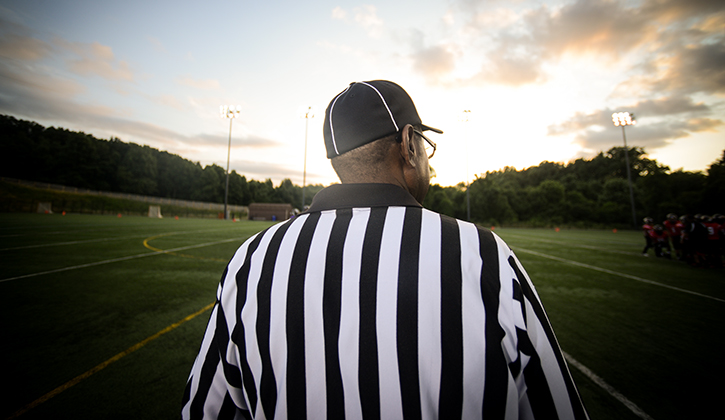 Under NCAA rules, can a player be penalized for illegal helmet contact on a situation that does not involve a defenseless player?

Technically, NCAA football does not have an illegal helmet contact rule, per se. Anyone who is not a defenseless player is still protected by rule 9-1-3 – using forcible contact with the crown of the helmet.

All players on the field are protected from their heads to their toes from a forcible crown-of-the-helmet hit. This is a 15-yard penalty.

The targeting rule – which carries a 15-yard penalty and ejection – requires a defenseless player along with forcible contact to the head or neck of the player or any contact with the crown of the helmet.

Do officials always confer with the coach before enforcing a penalty?

Typically, officials only confer with a coach or the captain on the field if there is a strategy involved.

However, if an offense loses a few yards and there is holding, the coach or captain has a decision to make. Some teams would rather have second-and-14 than first-and-20 depending on the field position. Generally, the coach makes this known with a hand gesture of “push them back” if he wants the penalty enforcement.

The only time an official should truly confer with a coach – e.g., walk over to the sideline and hold a discussion – is when something happens that’s so rare, an explanation is involved.

And trust me, if an official assumes the wrong thing with a penalty, the coach will let it be known.