Ask the Official: Motion rule has an exception for players who start on the line of scrimmage 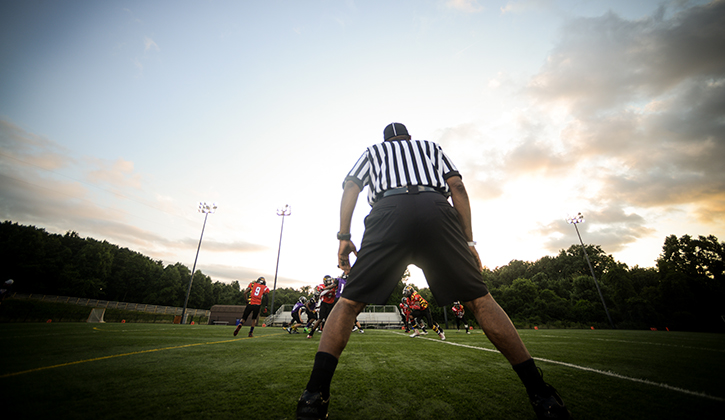 I have a question regarding youth football. We are governed by NFHS rules for our league in Kansas.

Can a running back or wide receiver be in motion at the snap so that we could run a quick sweep and/or reverse with that particular player?  Or must that player come back to a set position before receiving ball?

Rule 7-2-7 of the NFHS rule book reads: “Only one A player may be in motion at the snap and then only if such motion is not toward his opponents goal line. Except for the player “under the snapper,” the player in motion shall be at least 5 yards behind his line of scrimmage at the snap if he started from any position not clearly behind the line of scrimmage and did not establish himself as a back by stopping for at least one full second while no part of his body is breaking the vertical plane through the waistline of his nearest teammate who is not on the line of scrimmage.”

In watching the SMU-TCU game, a punt snap was muffed by the TCU punter deep in his own territory. The punter scrambles, loses control of the ball and an SMU player slides into the ball in an attempt to recover it.

Mid-slide, the SMU player hits the ball with his legs, and the ball goes out of bounds in the end zone. The ruling on the field was safety since the defensive player neither intentionally batted or kicked the ball.

Does that mean, in theory, a player can accidently advance a loose ball in either direction with any part of his body so long as it isn’t an illegal pass, bat or kick? For instance, could a player's shoulder strike or head butt a ball toward either goal line?

The key words in your question are “intentional” and “accidental.” A player who is making a good-faith effort to recover a loose ball could accidently knock it forward or backward with any part of his body — including foot, hands, shoulder or head. If, in the official’s opinion, the player intentionally does this, it is a foul.