How one college defense is holding opponents to -12 yards rushing 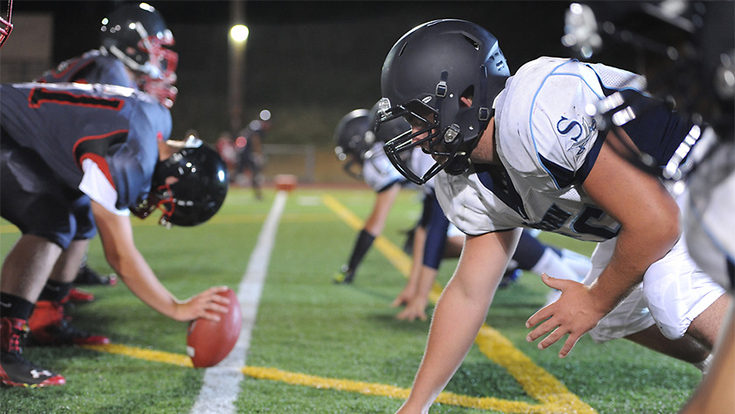 When defensive coordinator Mike Fox started at The College at Brockport in 2016, he had one objective in mind —  stop the run. The Eagles finished the 2016 season ranked 96th against the run in Division III. Fox brought an aggressive style that reflected his personality and utilized a 3-4 defense to accomplish his objective of being great against the run.

Under his guidance, the Eagles have done just that. It shows in the rankings as Brockport moved to 15th in 2016 (81.9 YPG), 3rd in 2017 (54.0 YPG), and currently rank as the number 1 defense statistically in all of college football allowing a negative 11.6 yards per game. They’re not just great against the run now, they’re dominant.

Brockport Defense by the Numbers Through 5 Games

For Fox, everything starts with the 3-4 base. Though they are a three-man front, they install five-man pressures to stop the run, teaching the blitzer(s) to become a 4th or 5th down lineman on the run. By Fox’s own estimate, he uses five-man pressures about 75 percent of the time. The pressure allows the defense to make plenty of tackles for loss (#1 in 2017 and currently #3 in 2018).

A result of this is, they’re now one of the best in the country at sacking the quarterback. In 2017, they led the country in sacks and are currently tied for third. Fox admitted the sacks have not been a focus for him and it’s not necessarily preached to the defense. It’s just something that comes along with the aggressive tactics.

However, takeaways are a major emphasis for the defense. The defense must get five turnovers in every practice. This includes any competitive period like inside run, pass skelly, one-on-ones and team.

If they don’t accomplish that goal, Fox has them do a 50-yard sprint with an up-down every five yards for each turnover under the target of five. They have some fun though. The players can chant “yard sale” on a play during practice, and if they get a turnover, it counts for two turnovers. As Fox points out, “It’s like a yard sale where everything is two-for-one.” This allows the players to have some fun with it and always keeps their focus on being “into” practice and emphasizes attacking the football — whether in the air or in the hands of a running back or wide receiver.

The back end of the defense benefits from the pressure up front. Fox primarily utilizes some form of Cover 3. He believes in allowing the defensive backs to get their eyes on the quarterback. He noted, “I truly believe if you get your eyes to the quarterback and have good eye discipline, the interceptions will come.” And they do. In 2017, the Eagles were 2nd with 25 interceptions and currently sit tied for 9th with 10.

Finally, the Brockport defense has become accomplished in stopping opponents in the red zone, though Fox uses a little different philosophy. While most people say the red zone starts at the 20, Fox starts his red zone mentality at the 13-yard line because he doesn’t see much change by the offense until then.

While in the open field, the secondary utilizes more of a spot-drop technique. In the red zone, they want to be physical with wide receivers and use more of a match up and physical mentality to disrupt the timing of the routes.