Notre Dame-Florida State: 25th anniversary of the Game of the Century 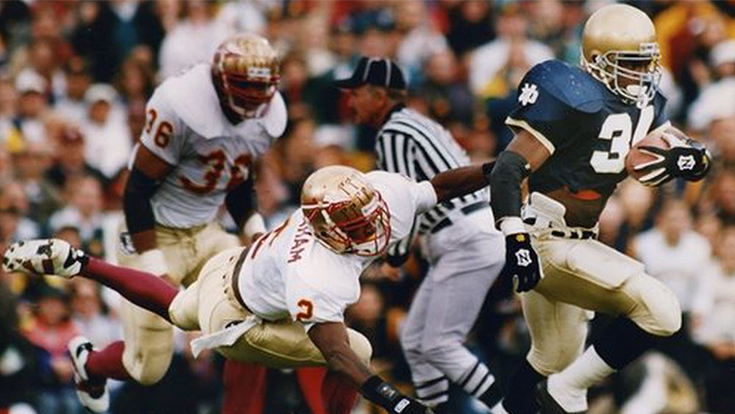 College football is nothing if not filled with history. Coaches, players and the games they coached and played have passed into legend since that first game was played on a field in New Jersey nearly 150 years ago. Every once in a while, the stars align to allow for a game of such magnitude that it makes a permanent mark upon the landscape of the game.

Games featuring legendary players, Hall of Fame coaches and once in a generation plays. When all of these come together, these matchups become known as “Games of the Century.” Rankings always play a part in determining these dream matchups. For decades the polls determined which teams had a shot at the National Championship.

On Nov. 13, 1993, No. 2 ranked Notre Dame took on No. 1 ranked Florida State in South Bend. Both schools came into the contest undefeated, both led by legendary head coaches — Lou Holtz at Notre Dame and Bobby Bowden at Florida State. The Fighting Irish, though loaded with talent, were decided underdogs in the game — even as the home team.

Prior to the matchup in South Bend, the Seminoles had been crushing their opponents by an average of 38 points a game and had under center the eventual Heisman Trophy winner in quarterback Charlie Ward. Future NFL stars William Floyd and Tamarick Vanover were counted among his weapons on offense. On the defensive side of the ball, Pro Football Hall of Famer Derrick Brooks was wreaking havoc at inside linebacker. He led a talented squad of future NFL talent, including defensive ends Derrick Alexander and Toddrick McIntosh and defensive backs Devin Bush, Corey Sawyer and Clifton Abraham.

The home team had its share of stars, as well. Senior quarterback Kevin McDougal would be tasked with matching Ward's athleticism and strong arm. He would leave Notre Dame holding the all-time career completion and passing efficiency records. The Irish backfield boasted future NFLers Ray Zellars and Travis Davis, while Lake Dawson and Derrick Mayes were on the outside. Holtz relied heavily on a veteran offensive line boasting future Pro Bowlers Dusty Zeigler, Aaron Taylor and Tim Ruddy. The real strength of Notre Dame that season was a stout defensive led by future NFL Defensive Player of the Year Bryant Young.

This looked to be a true matchup of college football powerhouses. Fans and viewers alike were not to be disappointed by the contest. The game also would make history in another way as ESPN's College GameDay decided to broadcast live from the game for the first time in the show's history sparking a what would become a new, beloved tradition.

The game started out just as everyone predicted, as the juggernaut Seminoles jumped out to an early lead, following a crushing 10-play, 89-yard drive that culminated in a touchdown pass from Ward to Kevin Knox. It seemed that, like past Games of the Century, this game was on its way to being a dud. And then it wasn't. After the score, Notre Dame railed off 24 straight points and the defense virtually shut down the high-octane Seminoles.

Heading into the fourth quarter, Notre Dame led 31-17. Ward showed the poise and drive that had led him to greatness his entire career in guiding a frenetic 99-second drive. It was capped off by a miraculous 4th and 20 pass that was tipped by Notre Dame into the hands of Florida State's Kez McCorvey for a touchdown.

On the subsequent Notre Dame possession, the Seminoles exerted their will and forced a punt for what could have been a tying drive for Florida State. Ward systematically marched his squad down the field 49 yards to the Notre Dame 14. In the waning seconds, Ward scrambled and rifled a pass toward future NFL great Warrick Dunn, only to have it batted away at the last moment by Notre Dame defensive back Shawn Wooden.

The game was over, and the Irish had upset the number one team in the nation 31-24.

The Irish and Seminoles swapped places in the polls the following week and set up a possible rematch for the National Championship at that year's Orange Bowl. This scenario was not to be — Notre Dame would be tripped up the following week in their Holy War matchup against No. 16 Boston College. The Seminoles would roll the rest of the season and would go on to defeat Nebraska in the Orange Bowl and claim their first National Championship.

Notre Dame would go on to defeat Texas A&M in that year's Cotton Bowl Classic and finish the season ranked — again — number two. Despite winning the Heisman Trophy, Ward would go undrafted that year and ended up playing for over a decade in the NBA with the New York Knicks (whom he would help guide to the NBA Finals in 1999), San Antonio Spurs and Houston Rockets. Floyd would be the lone Seminole taken in the first round of the NFL Draft, going to the San Francisco 49ers, whom he would win Super Bowl XXIX.

For the Irish, their signal caller, McDougal, would also go undrafted. He would spend the next eight seasons plying in the World League of American Football, Canadian Football League, XFL and Arena Football League. As a first-team All-American that season, Bryant Young would also get drafted by the 49ers in the first round, win Super Bowl XXIX and retire as a potential Hall of Famer. He is currently the defensive line coach for the Atlanta Falcons.

Taylor and Burris would join Young as first round picks taken from the Irish that year. Taylor played his way into becoming a dominant offensive lineman for the Green Bay Packers (becoming a champion in Super Bowl XXXI) and San Diego Chargers for six seasons before injuries cut his career short. Burris was a fixture in the secondary for the Buffalo Bills, Indianapolis Colts and Cincinnati Bengals from 1994-03.

The game would ultimately start the decline of the Notre Dame program with Holtz retiring in 1996. Bowden' run at Florida State would go unabated for another 16 seasons in which he won 12 ACC titles and another National Championship in 1999. This would be the last “Game of the Century” of the 20th Century and would go down as one of its most impactful.