Hallmarks of the Michigan Wolverine defense 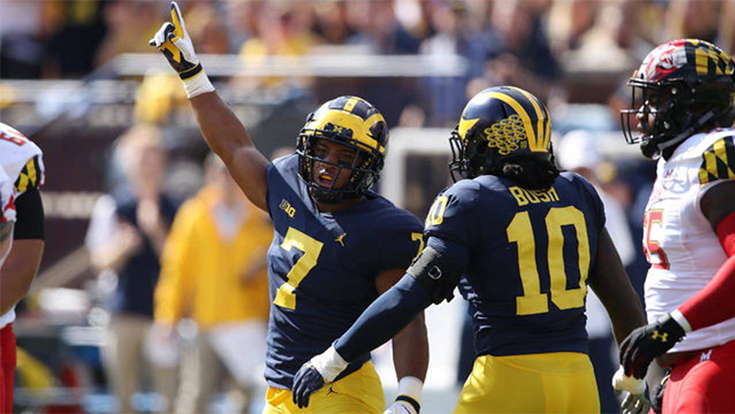 “When you say Don Brown, you’ve said it all,” proclaimed University of Michigan head football coach Jim Harbaugh after another shutdown performance from his team's defense. If you haven’t kept up with college football as of late, the Michigan defense has been lights out, and it’s happening against quality competition week-in and week-out. This week they take on their rival, Ohio State with a berth in the Big Ten championship game and a potential FBS playoff spot on the line.

Don Brown and his squad are giving up a mere 234.8 yards per game, with only 111.6 of those yards coming on the ground. Don Brown’s mantra, “Solve your problems with aggression,” has paid off. It is safe to say the defense has been the strength of this 2018 Michigan team. When watching the tape on Don Brown, there are a few themes that continue to pop up whenever the defense is on the field.

1) The ability to play man coverage across the board and get pressure with four rushers plays a huge part in the Michigan defense. The clip shown is a base one high safety man coverage call. Michigan State sends out five recievers and Michigan covers them perfectly. The play results in a “coverage sack.” Don Brown is willing to roll the dice on every snap and let his guys play man against anyone in the country.

In this clip, defensive end Chase Winovich aligns in a wide nine and is able to chase the Michigan State quarterback out of the pocket. When a defense lines up and plays man free coverage, while also generating a pass rush on the quarterback, that defense is set up for ultimate success.

Throughout a majority of their games, when Michigan gets teams behind the sticks and can drop back and play coverage, the pressure is still there because of how dominant their front four have been. It makes for a long night when teams can rush four and still get constant pressure on the quarterback.

2) The emphasis Don Brown puts on communication and being poised helps his defense adjust and adapt to any situation presented. In his University of Connecticut defensive playbook, Don Brown included his expectations for his players.

“Defense means poise. Defensive players must not crack under pressure. They must be able to handle situations, to maintain control in even the most emotional conditions,” wrote Brown. “Defense means confidence.”

Matt Canada of Maryland is notorious for his pre-snap shifts, motions and play designs. During the Michigan vs. Maryland game, the defensive squad for Michigan did an unbelievable job of communicating and adjusting properly as shown in the clip above.

The benefit of having an older unit on defense is that Don Brown can completely trust the players on the field to get into the necessary adjustments and checks that he needs them in.

As a result, when teams try to mess with them pre-snap, rarely will the defense be out of position. During practices Brown often states that he wants to keep it as simple as possible, yet wants to challenge his players to know the scheme. By doing this and demanding the communication aspect, there’s rarely a blown coverage or assignment from this Michigan squad. As Coach Brown states, “66 percent of our success defensively happens pre-snap.”

3) Michigan likes to blitz. Scratch that, Michigan loves to blitz. The toughest part about figuring out Michigan and their defense is that no two blitzes look the same. Don Brown is a big believer in disguising coverages and blitzes by hiding them through moving alignments from his interior players before the snap and stemming the secondary and rolling coverages.

Brown is also notorious for bluffing blitzes and playing games to confuse linemen. Throughout the second half of their game versus Northwestern, Brown dialed up a number of pressures such as this cover zero blitz that turns Chase Winovich completely free.

Brown proves time and time again that he is not afraid to gamble on the back end with his secondary, but more so trusts that his pressures will get home and help with the coverage by making the quarterback make an errant throw or take another hit. A good example is late in the game against Northwestern, Brown dials up an overload zone blitz which causes the quarterback to step up and make a throw that was almost intercepted.

Pressures like this that show up late continue to confuse college offensive lines. It makes it look as if they have no clue to how to pick them up. Though every pressure doesn’t end up in a sack, the constant feeling or being rushed and the amount of hits these quarterbacks take gets to their heads eventually.

Michigan and Don Brown’s aggression continues to be their trademark in their success this year.