Coaching the Wide Receiver - Have a Plan 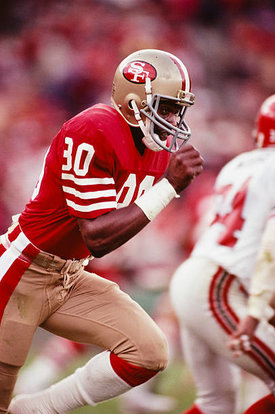 Having a plan at the line of scrimmage is probably more important than any other aspect of wide receiver play. The best wide receivers have mastered the way they talk to themselves at the line of scrimmage before the ball is snapped. This includes visualizing their job within the play call, analyzing the defensive alignment as a whole and then assessing the leverage and body language of the defender directly over them. There’s a lot of information that can be gained in just a few crucial seconds and it’s imperative that this thought process is efficient, which takes practice.

While scanning the defense, a well-prepared wide receiver should be running his mind through a library of trained techniques that have been repeatedly practiced, piecing them together to create a plan to attack the defense in front of him.

RELATED CONTENT: Learning from the Buckeyes' Third Down Plan

As coaches, it’s our job to help train players on the process of creating a plan and that starts with individual drills. It’s critical to clearly communicate the purpose of each drill and explain the exact game situation that the drill will applied to. This allows them to narrow in on an effective plan much quicker. When a situation arises in the game that was specifically reviewed in practice, players can draw on those reps, take comfort in relying on their coaching and play fast.

A coach may explain an individual drill with something like, “This week we will see a lot of Cover 1 with a hole player on third down, so the man defenders will play outside leverage. Here are the two plans to practice for vertical releases in the slot.” The coach then would proceed to walk through techniques he wants them to use in that specific situation. For example, “The OLB likes to open his hips and run to collision on an outside release, so speed release outside, bait him into running to hit you and win back inside with a violent rip.” Once that has been practiced, players can immediately pull from those reps when that situation arises in a game.

Even in the summer and preseason training camp, when the focus is strictly on fundamentals, it’s important for coaches to make sure every individual drill has a direct purpose and the players understand what that purpose is before going through the drill. If it’s a simple cone drill, explain exactly how it’s helping them in their route running, often related to specific breakpoints, but other times for body control and change of direction. Thus, when a player is struggling with a specific route, the coach can relate them back to that cone drill and they can apply that to a specific aspect of their game.

As a communicator and a teacher, a coach should do his best to simplify the game for the players and frame their responsibilities in a way that makes sense to them. Specifically related to the process of creating a plan at the line of scrimmage, the coach should remind players that the wide receiver starts with full control of every rep. They know where they’re is going, and the DB doesn’t. He runs forward while the defensive back run backward. The only way a wide receiver can relinquish the control of his route is by not playing aggressively, allowing the DB to outcompete him, or by using poor technique, which stems from not having a plan.

Explaining the WR vs. DB relationship so simplistically is done to drive home this point: The DB is starting at a disadvantage, so it only takes one sudden move, one violent cut or one sleight of hand to put him on his heels in chase mode. Thus, when creating their plan, wide receivers must ask themselves, “Where is the defender vulnerable and how do I put him in chase mode?”

By operating under this framework, it gives wide receivers the freedom to be creative and try different plans of attack because the task is simplified. They know they already have the advantage, which helps them understand that it doesn’t have to be anything overly complicated to win. The key is having multiple plans that can work for a given situation to keep the defender guessing. That’s also why it’s important to give receivers a toolbox to work with and not a rigid set of rules. Giving players the freedom to try different plans in practice and potentially lose without being yelled at will encourage them to stay curious and constantly try new ways to win.

The only time a coach should get upset at a player in that situation is when he’s not working within the toolbox he created with the coach and he’s doing something that wasn’t practiced. “Trust your technique, play patient, but sudden, and execute your plan aggressively” is something to say to wide receivers to frame their mentality. Ultimately, let them do the rest and coach the outcome.