Learning of the Advanced Tackling System - Part One 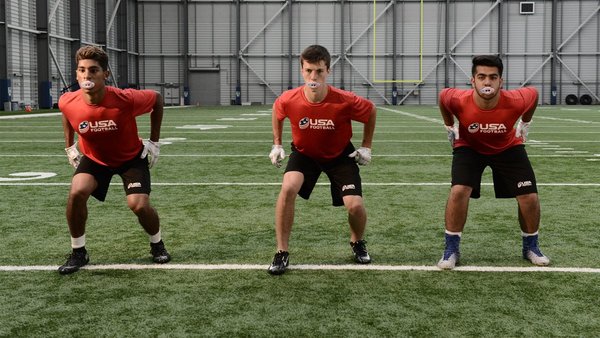 Late in the Spring of 2018, I received a call from my USA Football colleague and friend, Vince DiGaetano. Coach had been working on a tackling project, this much I knew. I also knew that another USA Football colleague and friend of mine, Andy Ryland was working with a Scottish Rugby Coach on something that was tackle centered. I wasn’t sure the premise of the work and I certainly was not aware of the depth and degree to which these men were involved with a skill that I hadn’t really thought much about in my time as a football coach.

Sure, we ran tackling circuits throughout the season. Usually tackling circuits popped up after stretch on Tuesday if we had a particularly difficult time bringing our opponents to the ground on the previous Friday. We had three drills; sideline tackle, head on tackle, and angle tackle. We’d work in three groups for about three and a half minutes at each station and then we’d at last be able to get into offensive individual drills, group, and team. The real football. What we were there to do.

Throughout my conversation with Coach DiGaetano, he conveyed some key pieces of information. He’d obtained some high level film, he needed to store it on my Hudl account, my Hudl categories were going to look very different, and I needed to tag data on two or three of the categories. He assured me that my task would be easy but mundane. The conversation ended and my journey into the art and science of the tackle in American Football began.

What I was responsible for was indeed simple. In short, I had to tag whether or not a tackle was made or missed, if it was made inside or outside of the hashes, and I had to spot shadow the first player that had the opportunity to make the tackle on each play. I was working asynchronously with a small group of coaches that were each responsible for tagging certain categories. Our small group of coaches included Scott Taylor, Head Varsity Coach at South Hadley High School in Massachusetts, Terry Summerfield, Head Coach at Barlow High School in Oregon, Vince, Andy, and Rob Everett, Defensive Coordinator at Bridgewater College in Pennsylvania. This group represented high schools and colleges and the schools and programs varied in size. Alden is a Class B School in Section VI, located in Western New York. We are the middle classification in the state, and within that classification, we are in the lower third when it comes to student population.

When the games that we needed to break down were complete, we jumped on a video conference call and my education began. Key points of instruction, drill titles, body movements, kinesthetic corrections, and a myriad of other terms and phrases passed between group members as I quietly listened and observed. I was overwhelmed by the amount of information that was being communicated on tackling. Just tackling. Scheme wasn’t discussed once. Everything that was being measured, discussed, and assessed had to do with tackling.

As I processed what was happening, I started to see the value in spending time discussing a skill that all eleven defenders on a field need to be proficient in. I was buying in to the importance. I was starting to tune my ears to the language of tackling that I was being exposed to for the first time. It wasn’t long before I took a look at some film of my own team when I was appalled at what I saw. We didn’t dominate one tackle. We would get ball carriers to the ground, but we weren’t dominant as tacklers. We didn’t keep our cleats in the ground when we tackled. We didn’t bend, we didn’t dominate our leverage, we tackled with flat hands. There was a lot that we weren’t doing right. Things I’d never thought of.

There are no end to the number of receiver drills that we can come up with. We run the ball six or seven times out of ten but I’ve got 20 different receiver drills ready to go and that’s before we start getting creative. Yet, for the skill that every single player on a football field may be called upon to perform at any moment, we’ve got three. Sideline tackle, head on tackle, and angle tackle. I felt like a fraud. Enter Richie Gray and the Five Fights.