Are you coaching the mental rep? 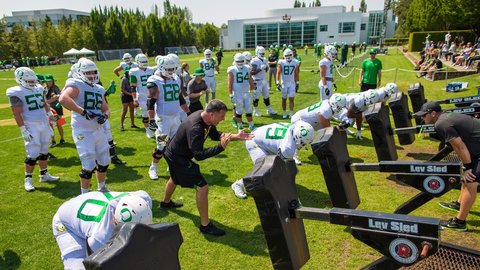 Sam Parker, offensive line coach at Division II national runner-up Ferris State, learned an effective method for developing players from newly named New York Jets offensive line coach Derek Frazier. Coaches always stress the importance of getting “mental reps” to players when they are not in a play or drill, but few have defined exactly how that is done.

For Parker, it’s simply a matter of watching the game or practice together as it is happening. Everyone has a role on gameday. On game day, Parker’s backup offensive linemen stand right by him and say exactly what they are seeing happen on the field. If they see the teammate they back up doing something right or wrong, they verbalize it. Parker has a graduate assistant take the notes as the players verbalize their coaching points.

When the series ends, the starters go to the bench and listen to what the backups saw. Parker and his assistants recap the notes taken and communicate any adjustments to the unit. Instead of just standing on the sideline being fans relegated to simply cheering for teammates, they now have a specific role in the game

They’ll be engaged because they have a purpose. Parker isn’t afraid to ask them, “What should we be running here?  What should we do?” He gets their input and takes it seriously.

Like anything that happens on game day, this process is developed and fine-tuned in practice.  Parker is 10 yards behind the ball with the offensive line next to him. The play is run and each player communicates what he sees. They are trained to have a detailed eye on what is happening and because they are focused in that way, it helps their own development.

RELATED CONTENT: How to make the game slow down: Football IQ

Parker believes in this simple yet effective routine. He noted, “That’s when development goes through the roof.” To not consistently communicate and offer feedback leaves them on their own. Parker now has additional sets of eyes to help improve his players’ reps.

Parker begins this routine early in camp. “The first two days, coach the guys who are not in the play. Train your guys to have that routine when you are out there because the players are able to get feedback constantly and the intensity of practice is picked up,” Parker recommends. “The intensity of game gets dialed down.”

Many times, coaches leave players to fend for themselves in processing what they’re actually getting out of a mental repetition. Having expectations for communication in practices and games as well as a specific routine for this feedback loop goes a long way in developing both the player on the field and the player waiting for his turn.