How the ‘Red Zone’ Became the Miami ‘Redhawks Zone’ 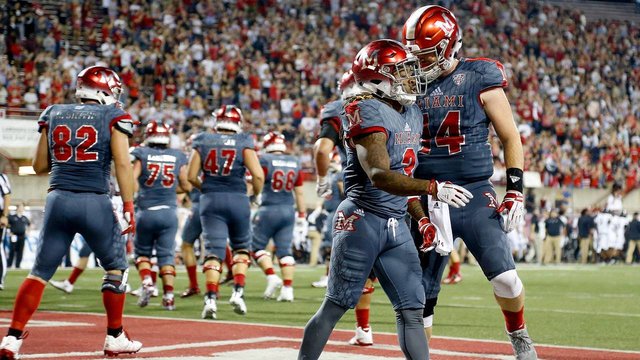 After a 2018 season of witnessing near-perfection whenever the Miami Redhawks offense entered the ‘red zone,’ co-offensive coordinator Eric Koehler is very matter-of-fact as to the biggest reason for such success. “It starts with good players,” said Koehler. “We like to think we do a good job of game planning for that part of the field, but it’s a fact we have some guys who can win the ‘one-on-one’ matchups! That’s a huge part of it.”

Out of 43 trips to the Red Zone, Miami’s offense came off the field with points 42 of those times. Of the 42 times scored, 34 of those times were touchdowns. While those throwing, catching or running the ball into the end zone for the touchdowns gain the most publicity, Koehler points to the guys playing offensive line. “I’m pleased we have a huge offensive line to protect our QB when there’s pressure,” said Koehler. “Lots of times down there the box is over-populated and it makes running the ball more feasible when your line can move their ‘down’ guys.

Koehler quickly points out the Red Zone success really doesn’t come up in recruiting conversations – well, at least not from the potential players. “Most recruits are not aware of our success until we mention it. I don’t know too many recruits interested in playing the skill positions on offense who don’t want to score a lot of points. This definitely makes the Miami Redhawks a place to consider.”

In addition of co-offensive coordinator duties, Koehler is in charge of the quarterbacks. He has been developing signal callers at all three levels of NCAA football, beginning at NCAA Division III Wartburg College in 2002, and he’s always been one to seek balance in his offense. It doesn’t mean he’s shy to put the ball in the air inside the opponent’s 20-yard line, though. “We have to be aggressive schematically. At the end of the day we coaches are being paid to deliver points. Players under scholarship are here to perform as well so success is expected.”

Koehler acknowledges he has been fortunate to have a quarterback the past two seasons like Gus Ragland. The senior finished his Redhawks career with a phenomenal 53 Red Zone touchdowns and only one turnover. “At Miami we don’t snap the ball and hope for the best,” said Koehler. We have been fortunate to have such a dedicated multiple year starter at quarterback. He’s in total control. All of our quarterbacks must be in control as they have to learn involvement in pass game, protection calls and receiver routes.”

The Miami offense practices with an ‘aggressive mentality,’ and Koehler says it gets even nastier when the Redhawks get into the Red Zone. “We have the defense on their heels down there. The kids are thinking we will score.” Koehler said the Redhawks spend a lot of practice time carefully preparing what the offensive coaching staff believes to be the best path to winning.

“Typically, the defense changes when our offense gets down there,” said Koehler. “It’s not just about what ‘we’ can do. It’s how we can work on adjusting to the red zone better than the defense does.”

Call it a mismatch, call it taking advantage – the Miami offense thrives on creating the one-on-one favorable matchup. It’s not always easy. “If a defense isn’t giving us one-on-one in the perimeter, is playing zone and can also stop your run game it can be challenging,” said Koehler. “We’re going to figure it out, though. We may have to motion a bit, or play an overload side to create a mismatch. Maybe we will play-action into an advantage. It doesn’t matter if it comes from a wide out, a slot or even the tailback, we will find a way to get a one-on-one shot to the end zone.”

RELATED CONTENT: Take Away State: How Utah State led the FBS in takeaways

Out of the 2x2 formation, the quarterback’s pre-read is showing a Cover-2 shell and in this case the ‘X’ has a height advantage over the opposing cornerback.

At the snap, the quarterback looks at the slot receiver to the short side which draws attention from the safety to that side. The defensive call has the linebacker redirecting the slot and passing him off to the safety. This gives the Redhawks the advantage on the backside fade.

Koehler says he is glad head coach Chuck Martin trusts the offense so much, especially when nearing the end zone. “Coach Martin is fine with our aggressive approach to scoring. The coaching staff wants touchdowns and not field goals. Coach will even give us the nod on fourth down if the situation appears right.”

By field position and formation, the defense has to respect the possible run play. With five in the box, Miami’s quarterback is also aware during the pre-snap read the strong safety could be a run-support player as well.

At the snap of the ball, the left guard pulls to the short side. The strong safety, reading the right tackle’s down block charges toward the LOS. The inside linebacker, reading the pulling guard and the running back crossing the quarterback’s face will move into position to take away a cutback run. The passing lane is wide open for the ‘Z’ running the slant route.