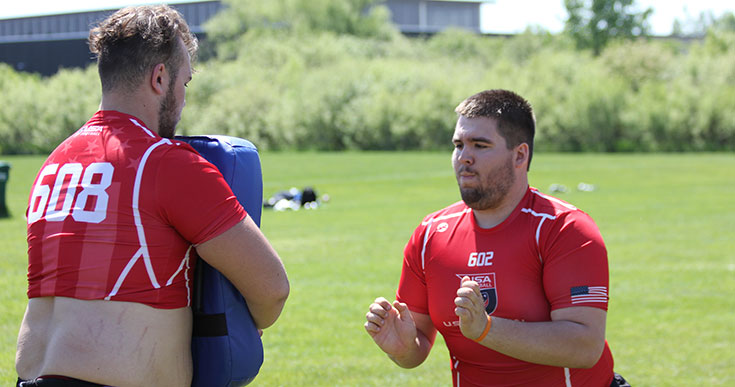 Offensive linemen are the unsung heroes of every football team. With minimal on-camera time and no fantasy stats, football games are most often won and lost in the trenches.

Steven Ciocci, a four-year starter on the offensive line at Wagner University and the current offensive line coach at Pace University, recently shared his thoughts on the most important techniques for young offensive linemen to practice and the proper way to perform each one.

“I always emphasize getting off on snap count,” Ciocci said. “You need to learn your QB’s cadence, learn how he speaks and the rhythm of his snap count. Train your body to respond to his snap count. The last thing you want is a bunch of false start penalties or late first steps because you can’t figure out the snap count.”

PASS PROTECTION FUNDAMENTALS: Watch the Continuous Set Drill by the Green Bay Packers and see how they develop their kick slide technique and an excellent hand punch.

“No matter how good your first two steps are, if you don’t follow through and finish the block, good defensive linemen will disengage from you and be able to get past you,” Ciocci said.

Fundamentals may be more important for offensive linemen than any other position on the field. Knowledge and consistent practice of these techniques can yield great results, even against superior athletes.

“Especially for the younger players out there, it’s not about how much you can lift or how fast you can run,” Ciocci said. “You can neutralize a better athlete because technique and fundamentals for linemen is the ultimate equalizer.”

PASS PROTECTION DRILLS FROM THE PACKERS

Check out this Continuous Set Drill the Green Bay Packers use to develop a swift kick slide technique and accurate hand punch.