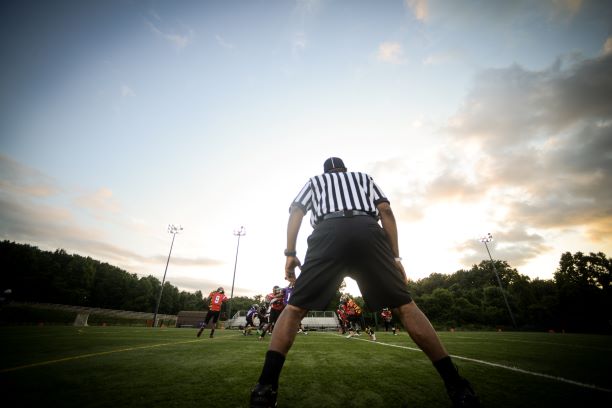 What is the solution to stopping official abuse? It is a very real problem. Listen to these facts:

In a detailed survey of over 17,000 referees conducted last year by the National Association of Sports Officials, 87% of respondents said that they had suffered from verbal abuse in their role as officials and 13% responded that they had been physically assaulted before, during, or after a game. That’s nearly one out of every seven officials. (The Guardian, April 16, 2018)

While many people in the youth sports world acknowledge that the abuse of referees is out of control, few seem willing to do anything to change it, and fewer still seem to care that many of the abused referees are still children.

RELATED CONTENT:  4 Types of Athletes Who Struggle to Succeed

To the parents and spectators of youth sports who feel the need to treat officials in this way, I would say, JUST STOP. You are setting an example of poor sportsmanship to the next generation and showing them that it’s okay to verbally abuse people you don’t agree with.

If you decide to stop, but still struggle to control your words, I’d like to give 3 simple steps that can help you break the habit of verbally abusing officials.

Just because you stand does not mean you abuse officials, but if you are abusing them when pacing the sidelines or standing close to the game, then the first step is to sit down. Relax. Enjoy the game without inserting yourself into it. You may have to force yourself to sit down, but in order to break the bad habit, you must practice a good one. So, start with finding a spot in the bleachers or bring your own chair and have a seat.

Step 2: Imagine the Official is Your Child

It is amazing to think that this verbal abuse would be considered child abuse if someone were yelling at their kid like that in a school setting or a work setting.

And if the official is older? Then imagine they are your brother or sister or best friend. Because that’s just what they are to someone. For some reason, spectators seem to forget that officials are mere humans, not robots who perform their duties. Don’t talk to them any different than you would if you were having a conversation with them face to face, at work, at home, or in the neighborhood.

Would you abuse them or insult them just because you don’t like the way they did something? Then don’t treat them that way just because they are 50 feet away from you!

RELATED CONTENT:  5 Ways to Exercise Patience as a Sports Parent

I firmly believe that WHO you are as a person is the most important part of parenting. Because there’s a very strong chance that who you are is what your child will become.

They are watching, they hear your verbal abuse to the refs, and chances are pretty good that they will follow in your footsteps, at some point in their lives.

Before you shout that insult, ask yourself, “Would I want my child saying this?”

One More Solution to Official Abuse

There is one more solution to the problem of referee abuse: become an official and walk in their shoes. I doubt you will every mistreat an official again!

Janis Meredith is a family coach who wants to help all parents raise champions. You can find out more at rcfamilies.com.