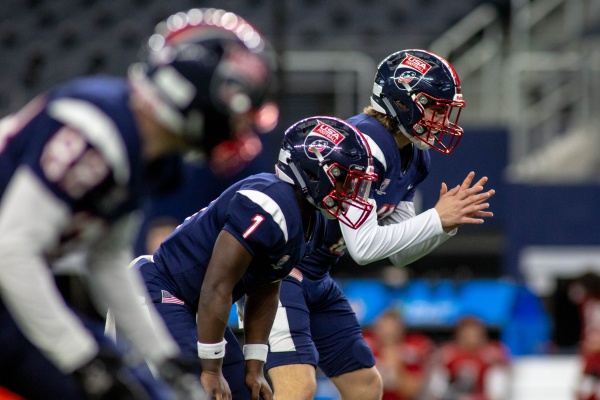 I remember the day like it was yesterday. I was scheduled to speak at a clinic in San Antonio and a week before I was to leave, I received a call from a coach I trust who told me I needed to be in Philadelphia for an invite only tackling presentation. Only issue was that the presentation was the same day I was scheduled to leave for Texas. I had heard rumblings that something big was coming down the line on this subject and could hear the passion in my friend’s voice, so I knew I had to be there. I rented a car to drive to Philadelphia and modified my departure city for my flight to San Antonio. I was in Philadelphia for six hours on July 21st, 2018: my tackling world would never be the same.

What I witnessed at Temple University’s indoor facility was the Advanced Tackle System demonstration by Coach Richie Gray, Coach Andy Ryland, and Coach Vin DiGeatano of USA Football. Within the first 30 minutes, I knew that there was something different about this approach to tackling. At first, I thought it was just the Scottish accent of Coach Gray that made this tackling presentation stand out. Quickly however, I realized that what they were saying made so much sense that I would never look at tackling the same. They were not telling you how to tackle, but rather giving you a way to communicate about the tackle and quantify the coaching points for the players. It was as if it was a personalized clinic for every coach in attendance.

The 5 Fights of Tackling; Track, Prepare, Connect, Accelerate, and Finish comprise the core of the Advanced Tackle System. USA Football has made this system affordable and adaptable for all levels of football. They have online coaching points, drill videos, and a grassroots following and support network on twitter that would make any politician proud. I will let the system teach itself, what I will share with you is my journey over the past nine months integrating the system into two different programs and the personal revelations I have made as a coach in one of the most complex aspects of defensive coaching. This adventure contains three parts: Crawl, Walk, Run.

Beginning on July 22nd, I began to watch previous years film and evaluate the tackles according to the 5 Fights of the ATS. I pride (or prided) a myself on being a cutting-edge teacher of defensive football and in particular the tackle. As I watched clip after clip through the lens of the 5 Fights, I was disappointed in what I saw. The core components that seem so clear and obvious now were not showing up on film the way I had hoped. After a short grieving process, I set to work identifying how the 5 Fights would make us superior defenders.

Because the ATS is adaptable to all tackling belief structures, it is difficult (although tempting) to no jump “all in” from the very beginning. All coaches have been at this spot at one point or another: a new piece of technology or an offensive system that is perfect for your team. But if these new things are not layered in your program properly and organically, the success of the program can be stunted. Below are pieces of the foundation that I set in when first learning the ATS.

· UNITE THE MESSAGE: As previously stated, the concept behind the ATS is relatively clear and simple. However, what it does a tremendous job of is breaking down the tackle and naming what each section should be about. The 5 Fights, along with the Key Performance Indicators (KPI) for each fight provide coaches the correction language that is quick and clear for the players to understand.

· KNOW WHO YOU ARE: One of the best features of the ATS is the grading components of the tackle. Well beyond just make and miss: yards after contact, horizontal location, vertical location, and the 5 Fights are just a few that are presented as important quantifiable pieces of the tackle. This data will guide you in assessing where your team is a tacklers and where your staff can improve on instruction. Templates for what should be graded are easy to share or create in your video system or excel.

· VISION DECISION ACTION: VDA’s have become the players favorite part of practice for the players. They are essentially elementary school games designed to combine football movements with distraction; decision making with chaos, which is what defensive football is all about. Take any drill you use in practice and add a level of choice at some point in the drill.

This first stage of implementation at Bridgewater College was exciting for the coaches and the players. It created competition between the players because they knew there were stats that were being analyzed. It also challenged the creativity of the coaches in evaluating the “why” of their drill work and how we can simulate the game better to create better tacklers.

In part two, we will address the WALK portion of interacting with the Advanced Tackle System and what it did for small college team and a spring professional defense.