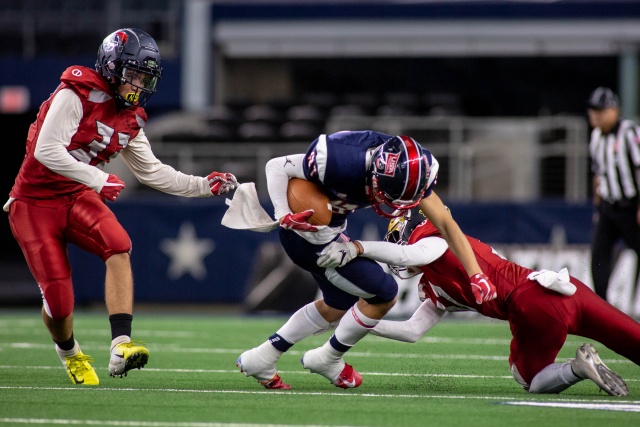 Refresh of an old drill

Drills which utilize the Vision-Decision-Action cycle are valuable in preparing players to move beyond the diagram and learn how to succeed in the chaotic environment that a football play presents.

While at Notre Dame college, the #4 team in NCAA Division II in 2018, I saw a drill that had many components I liked.

The drill started with two players on offense and two on defense on the backs as illustrated in the diagram below.

I should note that I am not a fan of the one-on-one tackling drill with players starting on their backs. There are much better and safer ways to teach tackling as outlined in our Shoulder Tackle and Advanced Tackling Systems.

I would note that starting on players on their backs is not necessary to create the elements of a VDA drill. I would suggest starting players turned facing away from each other as a better alternative, especially at younger ages.

Objective of the blocker

The blockers job is to dissect which defender is the most dangerous man to make the tackle first and block him. He should execute proper form in coming to balance, teeter to begin his uncoil, and fit his hands properly (bridge technique) while uncoiling his hips and finishing with the proper footwork. Proper technique should be applied and coached in this drill.

Objective of the defenders

The defender who is engaged by the blocker should use the proper mechanics of defeating the block. Like the offensive player he should come to balance, teeter, uncoil and strike with a pillar fit to shed the blocker. The unblocked defender is executing a proper run fit closing the distance and maintaining his  leverage position on the ball carrier. The free defender is additionally challenged because the blocked defender can change his leverage.  Think of the different scenarios: he is blocked out, he is blocked in, he defeats the block to either of those sides. In addition, the ball carrier gets a vote! He can technically run anywhere in the box so the defenders must always be aware for the radical cut and having to play one-on-one with him.

The ball carrier is pressing to his blocker and finding an attack point to run the ball. His fit into a lane should be based on the position leverage of the blocker. What makes this a great VDA drill is that in addition to reading the block, he also has to scan for the free defender.

Progression of the Drill

As mentioned, the drill can begin with players standing.  The element of one of the players getting up quicker and all having to make the decision of what role/assignment they have is created by starting the defenders on their backs.  I would not introduce the drill from players on the ground.  A better alternative in teaching the progression and allowing quick decision making to develop would be to have a coach control the two defenders and have one defender designated by the coach (but unknown to the offense) to become the most dangerous man. At the youngest levels, I would start them facing each other with the designated MDM moving a step before the run fitter.  Next I would turn the away from each other and making the vision and decision elements happen quicker. After the players begin to understand the purpose and flow of the drill, the coach can take that element away and allow the players to sort that out as they turn around and move.  Finally, after becoming proficient with that variation, the element of starting on the ground can be added. 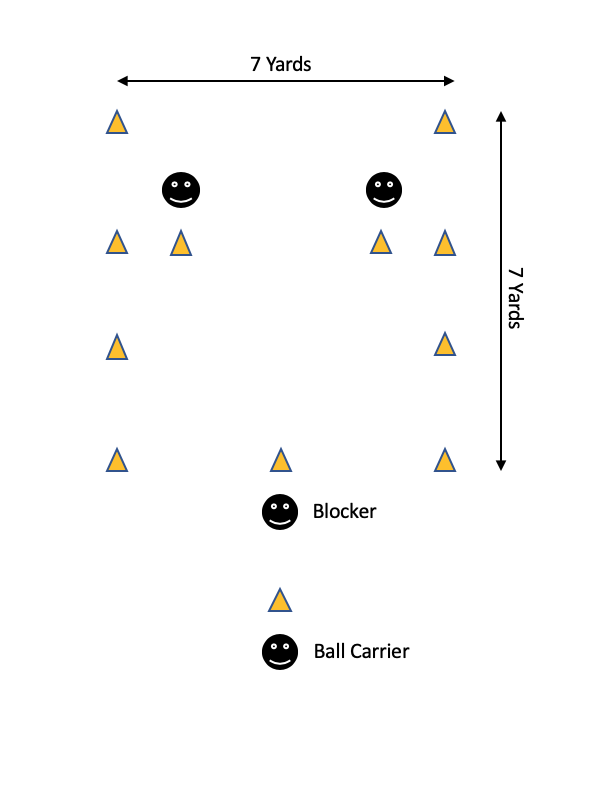 Drills involving quick decisions much like those that happen on the field develop players as decision makers and prepare them to perform in the chaotic game day environments that go beyond the diagrams we draw for them as coaches. As a coach placing emphasis on the technique performed is important as well. Proper form and technique makes for a safer play so always coach the technique. In these types of drills.