Over-hydration can lead to hyponatremia and in extreme cases death 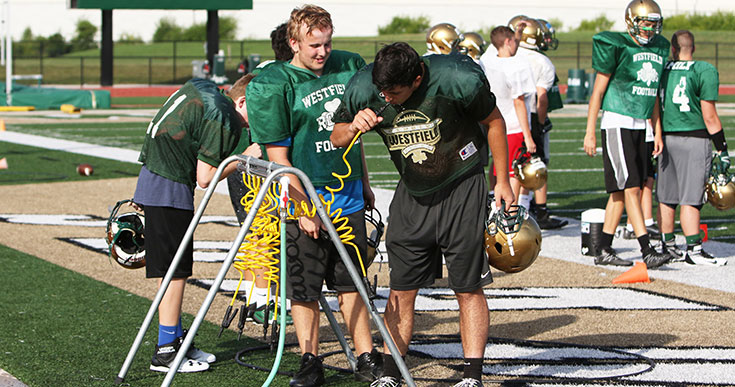 When there is news about catastrophic injury and death amongst athletes, most people typically think about concussion, cardiac arrest and exertional heat stroke. Exercise-associated hyponatremia (EAH) is rarely mentioned alongside these three conditions despite its extension into a diverse number of sporting events.

The recent and tragic deaths of two otherwise healthy 17-year old high school football players from hyponatremic encephalopathy underscores the need for increased education toward translating evidenced-based science into clinical practice. All EAH deaths are tragic because they are unnecessary and preventable. The single greatest risk factor for EAH and its associated complications is over-hydration. Although severely symptomatic hyponatremia is relatively rare, the evidence supports that death from EAH is avoidable if athletes adhere to rational hydration strategies and avoid excessive and unneeded fluid intake.

Nearly a decade ago, the perils of over-hydration during exercise were confirmed in studies performed on 488 Boston Marathon runners and 2,135 endurance athletes. These reports followed the back-to-back deaths of two female runners in 2002 from EAH. Subsequently, an international group of experts consolidated the existing evidence that strongly suggests that hyponatremia results from sustained or exuberant fluid intake beyond the body’s maximal fluid excretion rates (i.e., fluids consumed above the dictates of thirst or delivered intravenously). But despite strong evidence to the contrary, sporting culture continues to embrace hyper-hydration – with yet another pair of fatal outcomes in 2014 as a result of this misinformation.

Thus, while solid evidence published in a breadth of scientific journals clearly warn against the perils of hyper-hydration during exercise, responsible drinking during exercise has yet to be effectively translated onto the playing field. While concerns regarding dehydration and exertional heat stroke are valid, current recommended safe drinking guidelines and advising athletes to drink to the dictates of thirst take all of these risks into account, such that extreme hydration is never warranted and the adverse effects can be avoided.

In 2014, it is clear that EAH is preventable. We can control the amount of fluid that enters our body and must reconsider, re-educate and reinforce appropriate fluid intake and intravenous fluid guidelines. The recent preventable deaths should serve as a tragic reminder that medical personnel, professional societies and industry must strive harder to translate evolving scientific recommendations and guidelines to practical use by athletes and those who train them.

Tamera Hew-Butler is an associate professor of exercise science at Oakland University in Rochester, Mich. She is part of an international group of experts who are participating in a conference and subsequent consensus meeting on exercise associated hyponatremia (EAH). This free, one-day conference, organized by the HEAT Institute of West Chester Universityand sponsored by CrossFit, is Feb. 20 at the Park Hyatt Aviara Resort in San Diego, Calif.  Registration is free and available here.