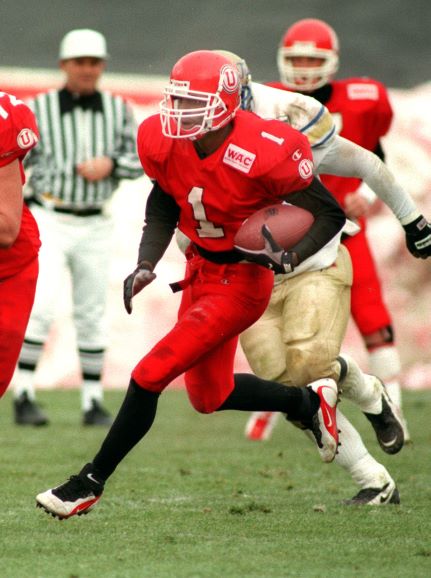 The 1999 NFL Playoffs proved to be ones of extreme highs and lows for Kevin Dyson. He was the recipient of the legendary Music City Miracle to shock the Buffalo Bills in the Divisional Round, but was stopped achingly short of a tying score in Super Bowl XXXIV. For Dyson – now Dr. Dyson – the outcome of that season served only as one short chapter in a long and brilliant pro career.

“People have asked me over the years about [the Music City Miracle], but it’s hot and cold depending on where I’m at and the atmosphere of the situation,” said Dyson. “That and the Super Bowl. I used that play as motivation for the whole of my career. That was one of the first times in my career that I wasn’t successful, and I used that as motivation to come back and I had one of the best seasons of my career that following season.”

“My freshman year, I caught the game-winning touchdown against Arizona, the Desert Swarm in the Freedom Bowl, and that’s probably one of my favorite memories of playing for Utah,” he said. “I had a fun time at the University of Utah. I loved being a Ute.”

Dyson would be selected 16th overall in the 1998 NFL Draft by the Tennessee Titans and would spend the next eight seasons as one of the primary receivers in Tennessee and in Carolina with the Panthers. Injuries ultimately derailed his career and prevented him from achieving the heights that he felt he was capable of.

“It was kind of frustrating how it went, I would have a good year, then get hurt and I never felt like I truly realized my full potential because I had so many peaks and valleys,” he said. “But, it wasn’t in the cards for me in that particular part of my life. I don’t have any regrets though.

After his playing career ended, Dyson felt he was destined to get into coaching, which he did. He started in the high school ranks in Tennessee, first as a position coach and eventually working his way up to be a head coach and athletic director.

“When I first left the game, I knew I wanted to coach, either in college or professional,” he explained. “At the same time though, I didn’t know if I wanted that lifestyle. It takes up a lot of your time and it is hard on your family. I wanted to try it though and give back to the game.”

Along the way, Dyson became increasingly interested in the academic side of the ledger. He realized he could impact the lives of students in a greater way while working in the administration. While at Utah, he earned his undergraduate degree in sociology. To further his career, he went to graduate school, first earning his Master’s degree and then his doctorate in education.

“Getting involved in the administration side of education was not something that I had planned, but I just kept getting more and more involved in it,” said Dyson. “While I was coaching in high school, I developed a love of learning that I never had before, and I wanted to challenge myself in new ways. That’s when I started progressing in the administrative side of it.”

He never envisioned the path his career would take. Now the Principal at Grassland Middle School in Franklin, Tennessee, Dyson is fully committed to education, his students, and their success. Much like a broken-field run, Dyson has followed a circuitous route toward where life has taken him. Through it all though, he has lived the simple motto of persevering through everything obstacle that has been put in his path. It is a lesson he learned on the gridiron and it is one he has never forgotten.

“Perseverance, overcoming adversity, and grit are all things I learned from football and in sports and those are lessons that I try to instill in my kids today,” he said. “Education is a grind and you have to persevere. Once you can break through to the other side, that’s where the real growth happens. It’s the same in football. You’re tired, mentally and physically, but if you persevere and push through, that’s where you really find your true success.”