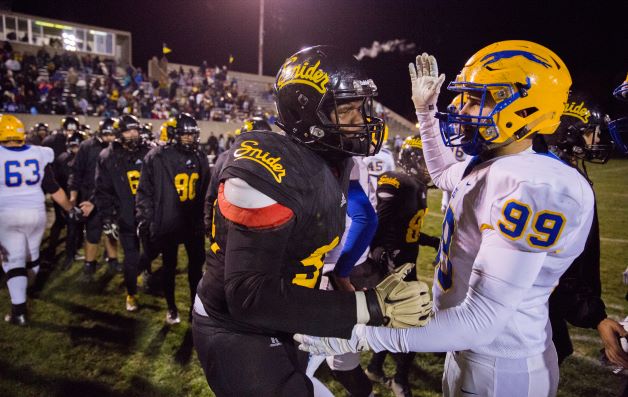 Sports and rivalries go hand-in-hand. The contests and the histories between teams can unite communities and inspire athletes to do their best.

But sometimes fans lose perspective and that’s when rivalries can go bad. They become marred by vandalism, insults, threats, and violence.

Since it’s a sports parent and coach’s job to encourage healthy competition in young athletes, it is imperative that we help our kids understand there is a right way and a wrong way, a safe way and a dangerous way, a fun way and an ugly way, to handle sports rivalries.

SAY NO TO VANDALISM

A few years ago, a high school basketball game in our community ended in ugliness when a school bus full of high school athletes was shot at by a paintball gun twice as it traveled home from the game. Luckily, the bus kept driving safely and no one was hurt.

There is simply no place for vandalism like this in youth sports. What starts out as “innocent fun” can quickly escalate into bodily or property injury. Administrators and Coaches need to stomp out this behavior by appropriately disciplining those involved.

RELATED CONTENT: Why It’s Good for Sports Families to “Run Away” from It All

SAY NO TO DEGRADING SPEECH

At that same game, there were also gay and racial slurs hurled at players, and one female basketball player was surrounded by a mob, challenged and taunted.

Light-hearted taunting is one thing, but individuals and crowds taunting and chanting inappropriate slurs is something that should never be tolerated. I’ve been at games where I’ve heard the fans chanting very offensive things and wondered where in the world the administration was.

Demonization of the opposing team is a sign the rivalry may be tilting toward something uglier, says Jim Thompson, founder and president of Positive Coaching Alliance. “When there is name-calling and taunting, it can very quickly lead to physical strife,” he says. Threats of violence, vandalization of school property, cheering when an opposing player is injured--these are attitudes that can feed into something worse. Our kids need to know that this is simply not okay.

As much as possible, parents. teachers and administrators should say yes to positive displays of school pride. Whether that’s noisy chanting, loud cheering, ridiculous costumes, or rowdy band music. The more we say “YES” to displays of rivalry that are clean, fun, and safe… there will be less times where we have to say “NO”

Parents, remind your children that these are games. And remind yourselves that the lessons learned from them are what our sons and daughters carry with them into adulthood.

Janis Meredith is a family coach who wants to help all parents raise champions. You can find out more at rcfamilies.com.