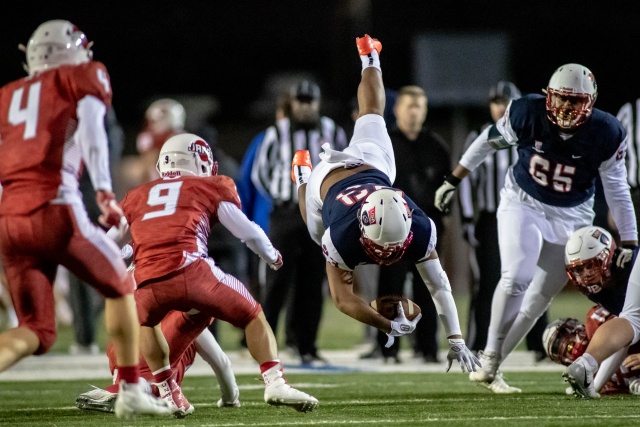 Coaches work on tracking the ball carrier all the time and many do so thoughtfully. Pursuit drills, often used as conditioning drills, are Tracking drills. Each tackle has a Tracking process but how often do we thoughtfully approach the body positions necessary just prior to contact in order to make a strong tackle? Fight to Prepare is all about the tackler’s ability to make the transition from the Track to the actual tackle. Foot placement, drop height, maintaining a dominant contact angle, balance, shoulder placement, the ability to get square and an understanding of the notion that square is strong, and keeping elbows in and claws up are among the Key Performance Indicators (KPIs) associated with the Fight to Prepare. Fight to Prepare is the moment when, in many cases, the tackler determines whether they are the hammer or the nail in the tackle.

Coach DiGaetano’s tackle report illustrates that Coach Fullen’s linebackers offer the greatest potential for growth. One of the key components to keep in mind regarding the tackle grading within the Advanced Tackling System is that grading is done by each aspect of the “Fight” progression. If a player scores poorly on the Track, this doesn’t mean that they will score poorly in the other Fights as well. A poor Track and a poor Prepare can still warrant a great Connect. While the Five Fights work together and rely upon and build upon one another, grading them as separate entities will produce much more specific data which will lead to much more specific coaching and correcting. Gone are the days of sweeping generalizations like, “Get there faster,” or, “Stay on him!” Coaches and players will hear things like “Foot in the Hoop,” or, “Drop height.” The strength of any system hinges on the level of specificity that the language of that system offers. Thoughts or feelings that don’t have words attached to them end up unarticulated. This is no different for tackling. The language is specific so that the coaching is specific.

RELATED CONTENT: Film to Field Friday on Coach and Coordinator – Fight to Track

In the words of Coach Dig, accountability is being where we need to be when we need to be there. Productivity is what we do once we’re there. When it comes to tackling, getting there is good, but it’s not enough. The Fight to Prepare is the first step in the productivity associated with the tackle and this area is not thought of enough. The first tackle graded in the video illustrates a great Track, which Coach Fullen attributes to the work that his players do specifically centered on Tracking. The near foot of the tackler is not where it needs to be to make a successful, world-class tackle, and the result is yards gained after contact. Coach Fullen is not alone in admitting that the Foot in the Hoop concept and many of the KPIs associated with the Fight to Prepare can be coached and considered more often.

The Strike Surface drill and Zombie Tackle are two drills that can help players address the Foot in the Hoop KPI. One thing that can be done to help our players visualize the hoop is spray-painting circles, about the circumference of a hula-hoop, around tackling bags so that players and coaches can see the “Madden Circle” as they tackle bags. We know the importance of the near foot and near shoulders working together thanks to our work in the Shoulder Tackling System, however, advancing this allows us to think about where the near foot needs to be in relation to the ball carrier in order to make a premier tackle.

RELATED CONTENT: Film to Field Friday on Coach and Coordinator – Fight to Prepare

Another KPI within the Fight to Prepare is the Ability to Get Square. Players and coaches should know that square is strong and even when a tackler is approaching from an angle, the goal is to strike the ball carrier's front side to create the greatest likelihood of a knock-back tackle, thus limiting extra yards gained. Players may want to turn their shoulders and move away from a strong, square position just prior to contact, but keeping the notion of “square is strong” at the forefront of the tackler’s mind is important. Zombie Tackle allows players to work on dip time so that they can time their coil and uncoil while working to stay square and keep their foot in the hoop. Each Advanced Tackling System drill allows for multiple KPIs to be addressed within each fight.

Coach Fullen illustrates a point that continues to come up with coaches that are adopting USA Football’s Advanced Tackling System: that this work can be done all year and without pads. The fact that the most important skill for players to be proficient in can be worked on all year is key. Also, as it continues to show up, the report generated and the fact that it points coaches directly to the corrective drills in a clear and direct manner really speaks to the strength of the system when firing on all cylinders. Time is the enemy of every coach. Many feel that they could do more with more time. The specificity present in the reports is unparalleled. Coaches can see what’s wrong in one graph and the next table takes them directly to the drills that can help their players specifically address the areas that need to be improved. This level of detail can even cut time in practice. Instead of a 15-minute tackle circuit that attempts to cover everything within a Fight, coaches can work for 10 on the KPIs that need to be addressed the most. This is a way for coaches to win their own fight to prepare as we collectively work to tackle safely and more effectively.