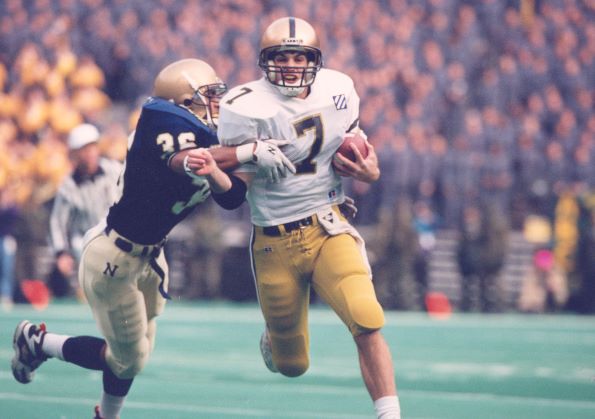 Growing up in Mesquite, Texas, Ronnie McAda knew he loved football and knew he wanted to take it as far as he could, However, not even he could imagine just how far the game would take him. His athleticism at quarterback for the Mesquite High School Skeeters led to be a highly recruited prospect by power five schools across the country.

Ultimately, McAda chose to attend the U.S. Military Academy and play for the Army Black Knights. He began starting as a sophomore and didn’t relinquish the role for the next three seasons. Before he was finished, McAda would break and set numerous school passing records, bowl appearances, and great wins over Navy.

His skills, abilities, and leadership attracted the interest of the NFL; he was selected as the 240th pick in the 1997 NFL Draft by the Green Bay Packers. While working through his commitment to the Army, McAda was able to forge a career in pro football. Ultimately, injuries derailed his pro career, but he as forged a new life bringing sports to the kids in his current home in Sunnyvale, Texas, while building a business with his family.

He took some time recently to speak to USA Football about his career, the similarities between football, and the magnitude of Army vs. Navy.

EM: Talk to me about the first time you played organized football. What made you want to play and how far into playing was it before you started to love the game?

RM: You bet, I was five-year-old and I had a friend come over and he told me about a football team in town that he was going to sign up for and he asked me if I wanted to play too. My parents went down there to look at it with me. At the time, if I’m not mistaken, Mesquite Pee Wee Football was the largest in the country. I played for the Mesquite Falcons and that’s how my football career got started.

When it comes to what I love about it, well first off, it turned out I was pretty good at it. Back then, I was one of the faster kids on the team, so they’d give me the ball and I scored touchdowns. I think that kind of feeds into it. When you’re good at something, you want to do it more. Being good at football got me to love it and that made me want to get even better at the game.

EM: As you got older and started playing for Mesquite High School, were you always the guy with the ball, like the quarterback or running back? Aside from skills, of course, what made you good at that role?

RM: Yeah, I played quarterback and running back my first few years, then after a while I was just the quarterback on offense. I was quarterback probably starting at seven years old all the way for the rest of my career.

As for what made me good at it, well of course when I was young it was all about athleticism. As you get older though, you start learning about the game – really learning about it. You learn schemes and why they work and what the thinking behind them is. I think if you want to be great at something, you have to learn as much as you can about it. Then again there are the intangibles. Things like a desire to win. You want to put your teammates in the right positions, you want to have the ball in your hands when the game is on the line. I don’t know exactly where those things came from, but I knew I had them.

EM: When did you first start deciding that you wanted to attend West Point? Was that something you had thought about a lot as kid?

One day, my head coach pulled me aside and he told me about a recruiter who had been coming by from West Point and asked if I had filled out any of their paperwork.

When I told him, I didn’t know who they were, he sat me down and told me all about the history and the tradition of the military and what a prestigious school that this was. When he finished telling me about Army, it just clicked in my head that that was where I belonged.

EM: How long did it take you to adjust to life at West Point? I’m assuming having the background and discipline from playing football helped some, but how much of a change was it?

RM: Let me tell you that first day is something I was totally unprepared for. You sit with your family in the gym and they talk to you a little bit and welcome you to the Army. Then, they tell you to get up, kiss your mom and dad goodbye because that’s the last time they are going to see you for a while. Then you go through some double doors and from that point on … it’s the systematic breaking you down of who you were so that they can build you into something new, an officer in the U.S. Army.

I’ll be honest, it took me at least a semester and a half before I was really adjusted to how life is like in the military. I had a lot of frustration to work through. I didn’t think this was for me. Quitting though, it was just not something I could do. I finally got comfortable with the routine. If it wasn’t for football, I know I wouldn’t have made it.

EM: Tell me a little bit about the Army/Navy game. As a fan of college football, I know that game is something truly, but what does the game mean to you as a player?

RM: It’s hard to explain, really. Playing in those games are some of the greatest moments in my life. Those games are just absolutely amazing. Every year, the atmosphere of those games just had me in awe. And, when you think about it, you’re playing against guys who are just like you. They are going through the same experiences and when they graduate, they are going to have the same commitments that you have.

They’re also our brothers, too. I just happened to play in three of the closest, most exciting Army/Navy games in history and at the end, as happy as I was, seeing the loss in those guys’ eyes, I felt bad for them. I was happy for us, but I felt bad for them. It’s an emotional game and it means so much for our country.

EM: A lot is made about the similarities between football and the military. What can you tell us about that? Is there anything to that?

RM: I will say that the band of brothers in football is very strong, just the way it is in the military. When coaches say you’re playing for the guy next to you, that’s what the military is all about. You’re out there fighting for the person next to you. It’s not exactly an exact comparison, I mean you are going into ‘battle’ with your teammates, but you’re not really storming the beaches of Normandy. [laughs]

There is something to it in that you are all banding together toward a common cause. The way you as a football team can get through things and win is by doing things together. In that way, it’s like the military.

EM: Lastly, what is a lesson you learned or a skill you gained through football that helped you in the military that you still use today?

RM: I think it’s discipline. You learn to be disciplined through athletics and that is extremely useful to have if you’re going into the military. I try to instill that in my kids now. It seems like discipline is a concept you don’t get from a lot of other places outside of sports. Discipline helps fuel that will to win, that will to be the best that you can be. You have to discipline yourself to do the things that other people either don’t like to do or aren’t willing to do in order to be successful. To me, that’s the most important thing that I learned in playing sports and it was true even at West Point.