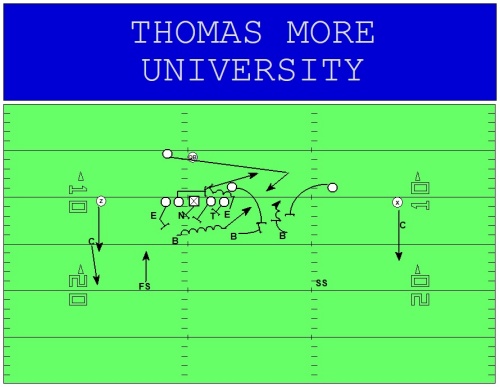 When Sir Isaac Newton announced, “For every action there is an equal and opposite reaction,” it’s a sure bet other mathematicians wrote it down and put it to use. Newton’s third law works just fine in football as well, especially for defensive coaches faced with scheming against up-tempo offenses. Defenses, equally and oppositely, have come up with varying versions to counter the up-tempo offenses so smugly named Sugar, Hurry-Up and NASCAR.

Chris Norwell knows a little sumpin’ sumpin’ about facing the up-tempo offenses created by demonic offensive coordinators. The Thomas More University (Ky.) defensive coordinator has spent a lot of years game planning the approach his Saints defense will take against those fast-and-furious offenses. His methods work, as evidenced by his contribution to coaching TMU to five NCAA Division III playoffs appearances.

It Starts with ‘Clicking on the Video’

Norwell wants to be clear about the offense’s intentions. “First, I want to know why the team is using up-tempo. Are they an offense which runs it as a ‘core’ belief? Or is it more of something used after certain situations?” As a veteran of the college coaching ranks, he’s been able to decipher through video to identify a team’s definitive reason for going fast. “Lots of teams like to go up-tempo after a big play for first downs. They just get up to the line and try to get the advantage over the defense.” Norwell says coaches also have to prepare for a quick count in short yardage or goal line situations.

“Watching tape, we try to figure out how they are using tempo to their advantage!”

Use Your Scouting Report!

To be successful against quick-tempo offenses Norwell lists these musts:

‘Stick to Your Guns’

Norwell’s Saints mainly play a 4-3 defense and may vary slightly to a 3-4 look randomly. When asked about changing a defensive scheme to just three, or even two, players with hands in the turf, the defensive coordinator turned old school. “I’m biased. I played defensive line in college, and I want to own a gap at the line of scrimmage instead of a fill player being five yards back!

“Our defense here at Thomas More, we are very multiple at what we do. We’re able to do something to attack the different offenses we face while keeping it simple. I don’t want to be too complicated. At the end of the day we want our guys playing fast.”

Norwell describes the play which is becoming a go-to play for up-tempo offenses utilizing the RPO scheme. “It’s a tricky play and it’s something we really work on with the D-line. You have the back on the opposite side and there’s a puller. It’s a little bit different read.” Here’s Norwell’s approach:

“I don’t want to be too complicated. At the end of the day we want our guys playing fast.” 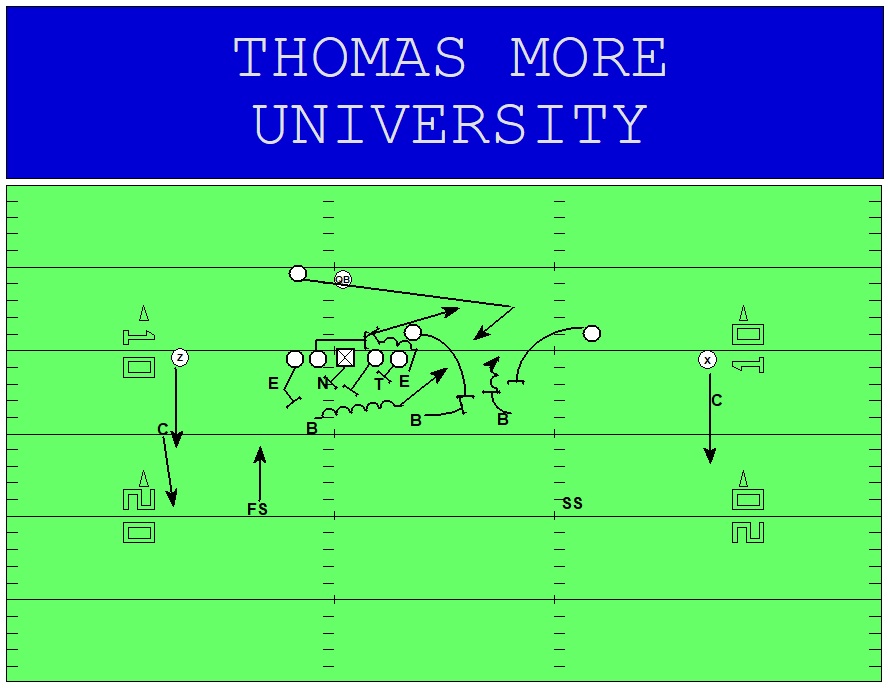 The DE squeezes down to take on pulling guard. Notice he is beating the puller to the hit, using his inside shoulder to deliver contact. The QB sees the DE’s position and gives the ball to the RB. The DE is able to adjust to the ball carrier. Also note the opposite side LB becoming the ‘free hitter’ on this play. 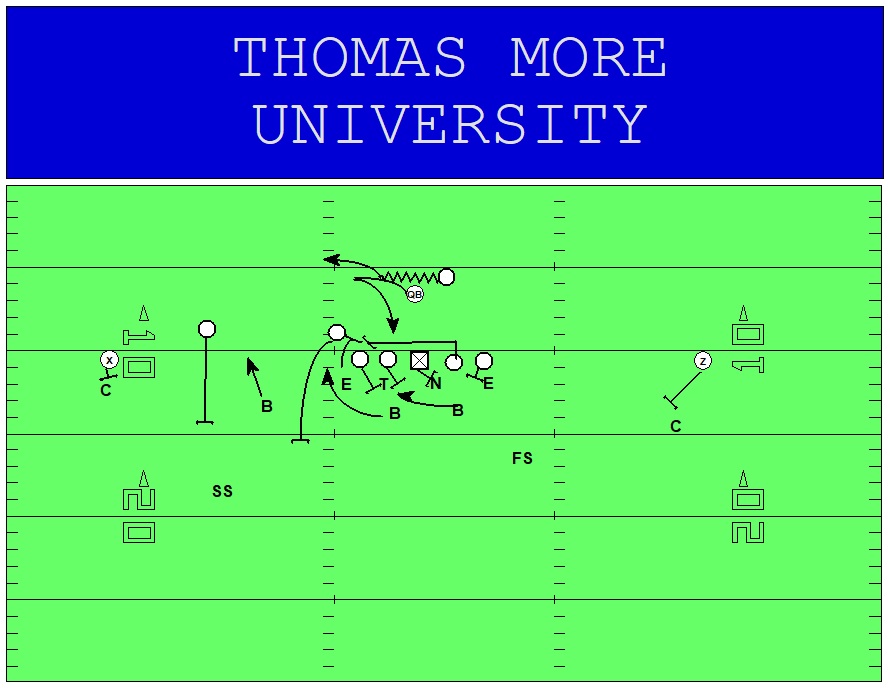 The offense pulls the G on this designed Speed Fake/QB cutback. The play-side DE and middle LB bottle it up, leaving the backside LB to fill and take away any cutback path for the QB. 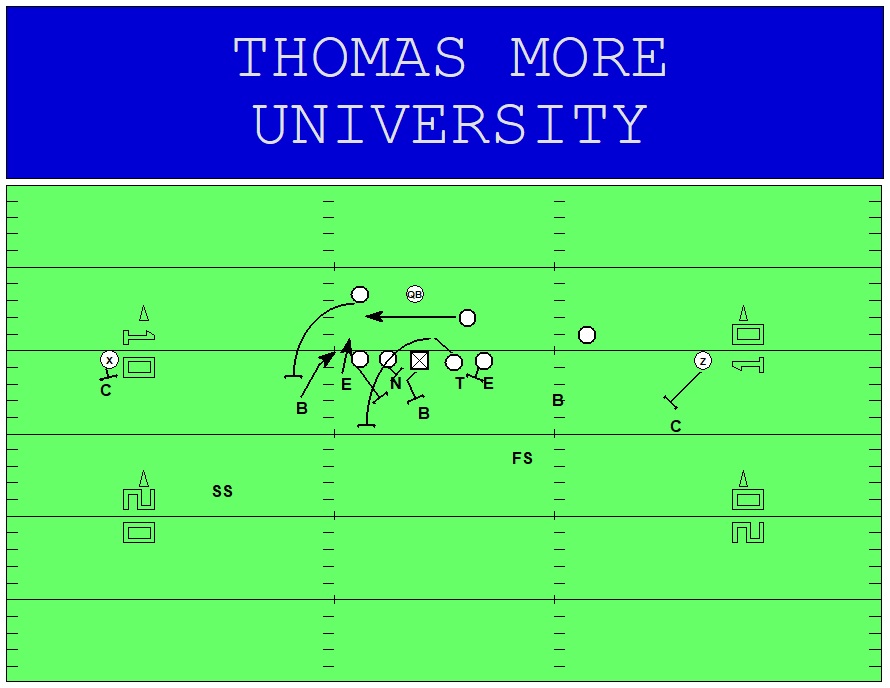 Defending Power Read Lead: The play side DE and LB have switched assignments with the LB cutting underneath to take QB while DE stays contain mode and makes TFL. 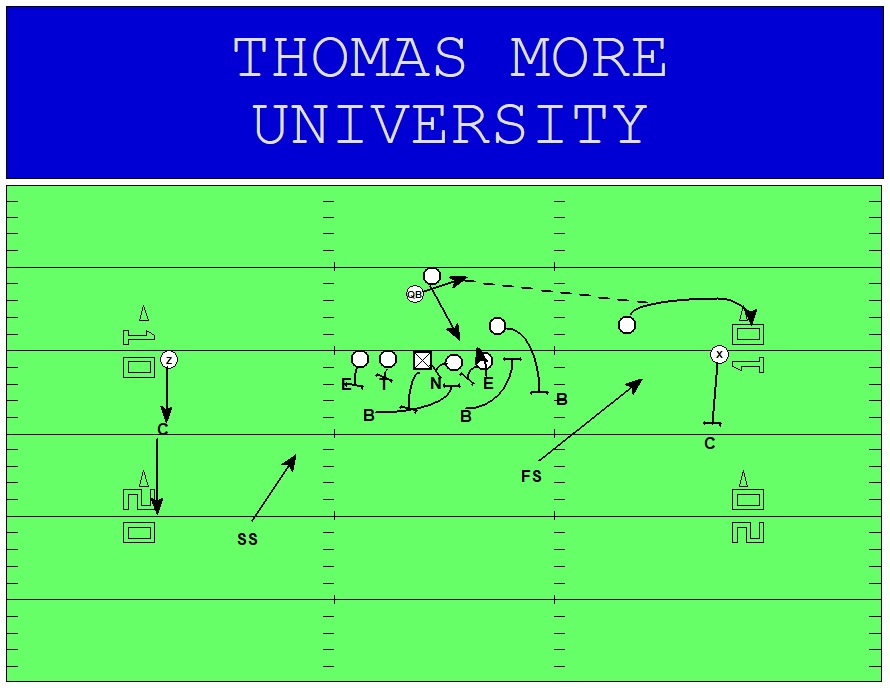 TMU taking on the RPO. Note the fill angles by the LBs to take away the run, forcing the pass. Quick reaction by the secondary.