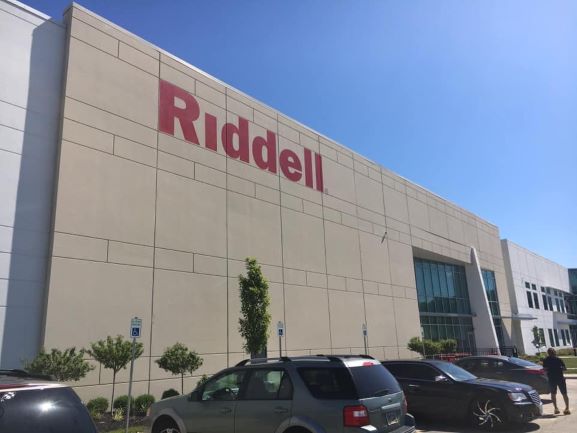 When your child gets ready to hit the football field, either for practice or a game, generally the last piece of equipment to be put on is the most important and that’s the helmet.  Whether it’s a helmet that the program or school distributed or it’s a helmet that you purchased for your child, there is certainly a story as to how that helmet made its journey from its inception to being on your child’s head.

In the case of Riddell helmets, that journey begins at the company’s newly built manufacturing facility in North Ridgeville, Ohio.  It’s a 350,000 square foot operations headquarters that is located not far from where Riddell used to call home, but now they are in a facility that has been a game changer for them since it opened in 2017.  My son Bradley and I had a chance to tour the facility recently when we were in Ohio for the USA Football Middle School Bowl Game Series.

As our drive over from Canton was winding down and we arrived at the center, Bradley’s eyes lit up when he saw the massive building with “Riddell” on the outside.  The place is magnificent.

“It’s really a showcase for us,” said Ben Marker, Riddell’s General Manager of North Ridgeville who took us on the tour of the facility. “We moved just a mile and a half down the street.  With this being a showcase for us now, we’re excited to bring people in and show them our facilities and capabilities.  Now, a lot of our customers want to come out and see what it’s all about, so I think it’s helped business quite a bit.”

Just a couple of hours before we arrived at Riddell for the tour, Bradley checked in at Walsh University and received his USA Football gear for the week.  As part of the process, he was fitted for the Riddell helmet that he would wear in practice during the week as well as the game and there were Riddell representatives on hand that made sure that each player had a helmet that fit correctly.

Riddell is the official protective equipment partner of USA Football and an important part of events like the Middle School Bowl Game Series and the U.S. National Team Training Camp.  The players for the U-14 games wore white Riddell SpeedFlex helmets while the players for the U-15 game had a chance to take part in some exciting new technology from Riddell.

“It’s been a great partnership,” said Marker. “We have a lot of fun with the events.  We love doing new things with paint and decoration and there’s more coming on the horizon. Many teams are getting away from basic white helmets with the side shield decals.  We’re offering the flat black helmets and flat white helmets with InSite.”

During the tour, we visited each department in the facility and we were shown how a football helmet is created and reconditioned whether it’s a custom ordered helmet or a helmet that may have been purchased at a sporting goods store.  From the helmet shell to the padding inside to the chinstrap, it’s quite a path for a helmet to get from it’s birth to the point where it’s ready for action.

Bradley and I had the chance to see how the helmets were painted and then where the helmets went to dry.  There were departments that handled face-masks, chin-straps, and the stripes and decals.  We also saw how helmets are tested to make sure they can withstand a hit and we were taken through the process of re-certifying helmets, not just made by Riddell, that are sent to the center from programs, schools, and teams from across the country.

From a personal standpoint, we saw a couple of the New York Jets’ new helmets.  Riddell handled the transformation of the helmets to the new “Gotham Green” color and that was all a part of the re-conditioning process.  Helmets must be re-certified every two years based on industry guidelines, but Riddell recommends yearly reconditioning to maintain proper protection and performance.

It’s simply something that has to be done to ensure that a player is wearing a helmet that protects him or her the way it was intended.

“It’s super important,” said Marker.  “From a re-certification standpoint, you have some seasoned employees that have seen hundreds of thousands of football helmets, so they know exactly what to look for. You have trained individuals that know what to look for to ensure that the helmet can go back on the field and be re-certified to properly protect a player.”

The tour ended with a visit to the collectibles department.  It’s a part of Riddell’s business that has really exploded as memorabilia collectors are ordering NFL helmets as souvenirs and in many cases for the opportunity to get them autographed by players.  The demand for these collectible helmets is exceeding Riddell’s expectations.

The full-size SpeedFlex helmets are selling for $650 each and they’re flying off the shelves.  Riddell’s initial expectation was to sell about 2,000 of those helmets in a year but they are on pace 10,000 just on the collectible side.

“It’s been great,” said Marker.  “It’s a good problem to have.  Football is popular right now and we’re right at the center of it.”

The tour was amazing.  It was awesome to see the process of how the company makes a helmet and what the process is like for reconditioning.  Having played youth football now for nine years, Bradley pays close attention to helmets and all the new technology in recent years.  I think Ben Marker would agree with me that Bradley probably asked more, and in many cases, better questions than I did while on the tour.

The Riddell center in North Ridgeville, Ohio is an amazing facility and just about any football fan of any age would be fortunate to get a look at it.  Thanks to Riddell for having us as guests!

Peter is the television play by play voice for the New York Streets of the National Arena League and is a sports anchor for the CBS Sports Radio Network and WCBS 880 Radio in New York.  His son Bradley plays middle school football on Long Island and is a participant in the U.S. National Team program while his younger son Jared plays flag football.   Peter, his wife Sheryl and the boys are busy cheering on the New York Jets when they’re not at a youth football field.