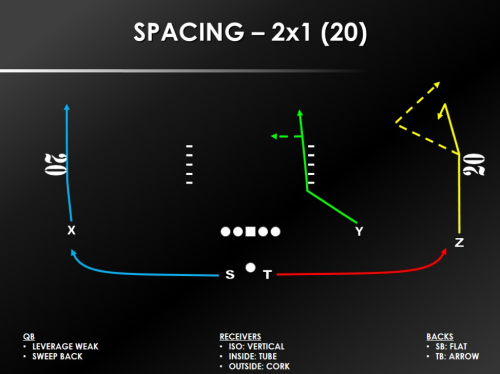 Every pass game needs a pass concept they can lean on as the foundation of their pass game. I will detail a spacing concept I have carried with me since my first day as a coordinator. This is an all-purpose pass concept that can be run from any personnel, formation and situation in a game. This spacing concept is a catch-all and is paired with a simple set of rules for all players. This is a hybrid or curl/flat, smash and Y-cross. I know that sounds like a lot, but the rules and progression allows me to carry this one concept, as opposed to all three of the aforementioned plays. I will detail the spacing concept, complete with assignments, reads and diagrams.

The weak side of the formation has two routes packaged together as a “picture” for the QB. It is a vertical by No. 1 and an arrow by No. 2. Those routes are left on no matter what the defense does. There is nothing that can ever change those routes. The major coaching points to the weak side is that the No. 1 receiver needs to align on the top of the numbers to inside. The No. 1 receiver must leave himself a “reception area,” while the No. 2 receiver needs to stretch the field horizontally as quickly as possible.

The strong side of the formation has three routes packaged together as a timing mechanism for the QB. These routes can change due to what they see defensively. These routes are all completely independent of one another.

The No. 2 to the strong side of the formation has a tube route. A tube route is an inside vertical/seam that has the option to convert after 12 yards. The split and alignment will vary based on the formation and the hash placement. The receiver gets to a landmark 2 yards inside the hash as quickly as possible on their stem and presses vertical along that landmark with the presumption they will continue all the way down the field. At 12 yards, the tube route must decide if they can stay on that path. If the receiver can continue to run down the field on that landmark and be open, do so. If there is something preventing them from being open downfield, snap the route off and hook up in any open window between the hashes.

The third route to that side is the back out to the flat. This back can be used in protection, whether that be drop back or play action. They key point for the back is to get to the numbers as quickly as possible. The back’s job is to widen the field for a horizontal stretch to open a window down the field or hold the cornerback.

This is a pure progression read for the QB, or sweeping read. The QB reads the concept weak-to-strong. The QB wants to have the weak orread determined pre-snap as many times as possible.

Strong side: Start in the middle and sweep away from the original read.  Hang on the tube route until you are sure you cannot throw it. Continue to scan/sweep back to the cork. Continue to scan/sweep to the checkdown (back in the flat). Again, the progression is indicated using the colors or a stoplight. Star at green, move to yellow and stop at red.

Pure progression reads for the QB means that the timing needs to be in sync. You will note that the initial progression read is two quick throws packaged together as a single picture. The QB will get the ball out of his hand easily under two seconds from the snap.

The QB read then moves to the tube (12-yard decision route that is ready to be triggered by the QB) and then to the cork (a stemmed route breaking at 16 yards) and finally to the back in the flat (checking protection and then getting out to his landmark last).

By using these rules, the routes sync up perfectly with the QB’s progression. This is the most critical aspect of the concept for anyone using pure progression reads. The routes are open when the QB is ready to trigger the throw. 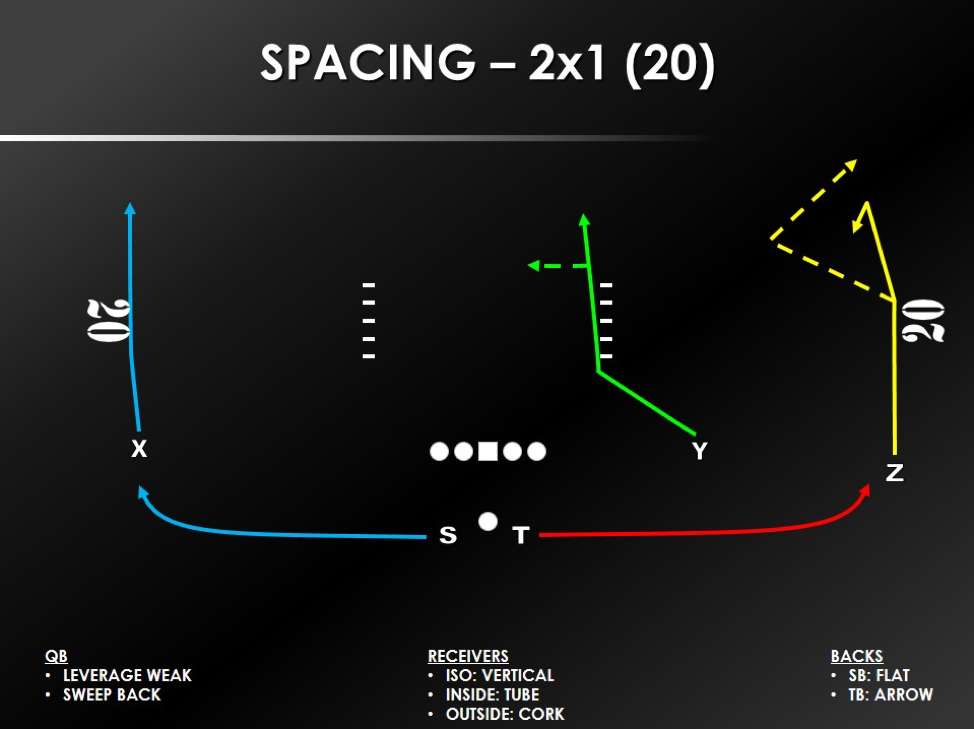 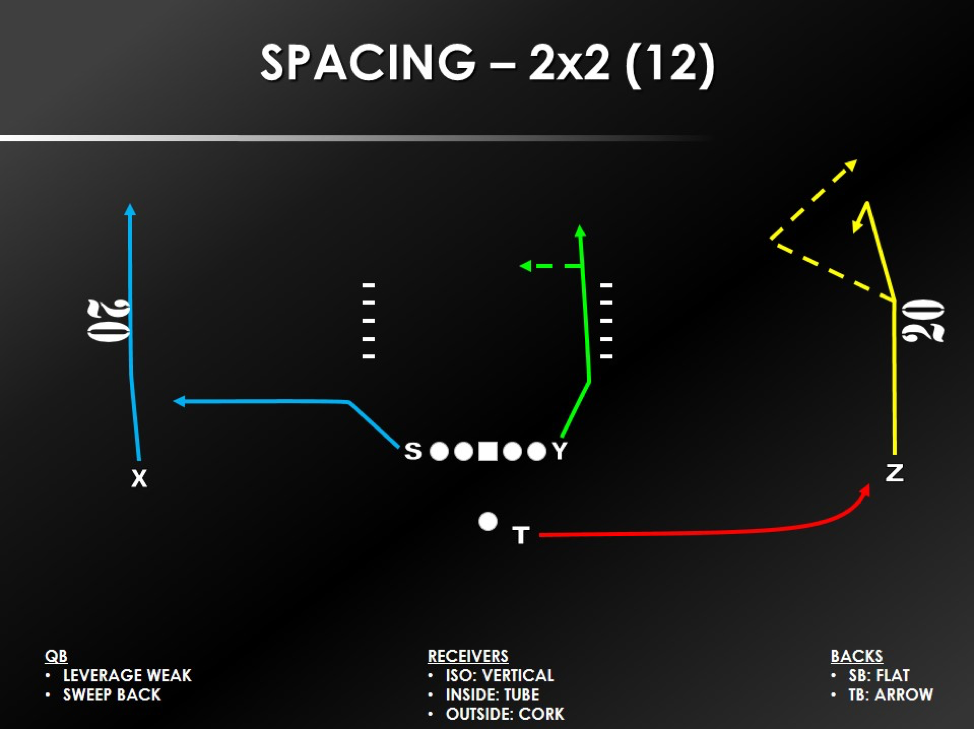 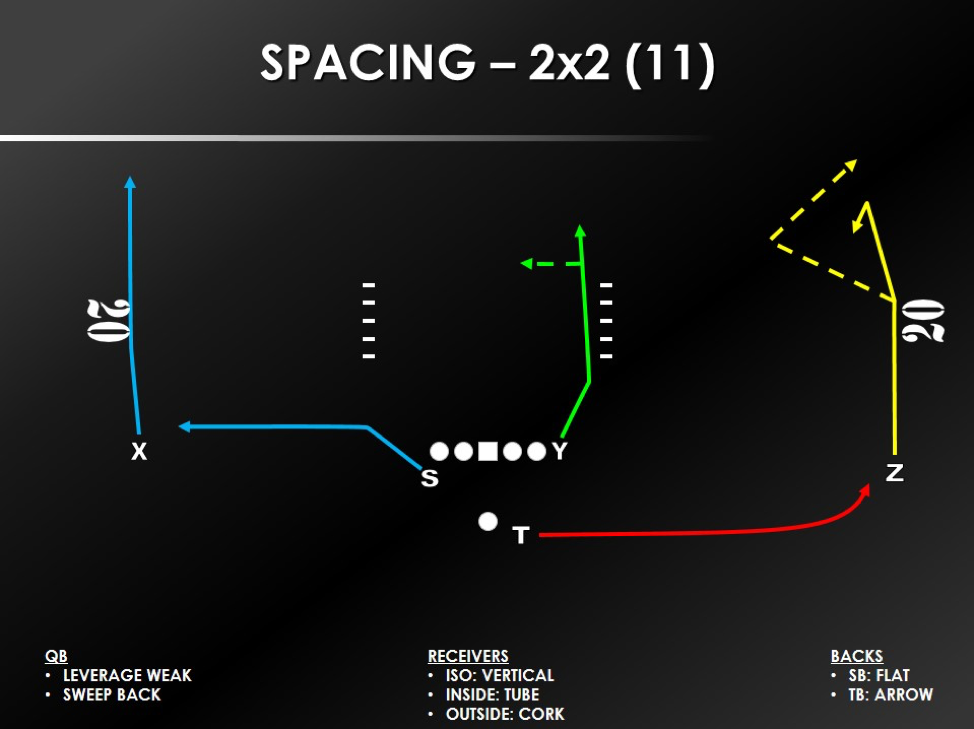 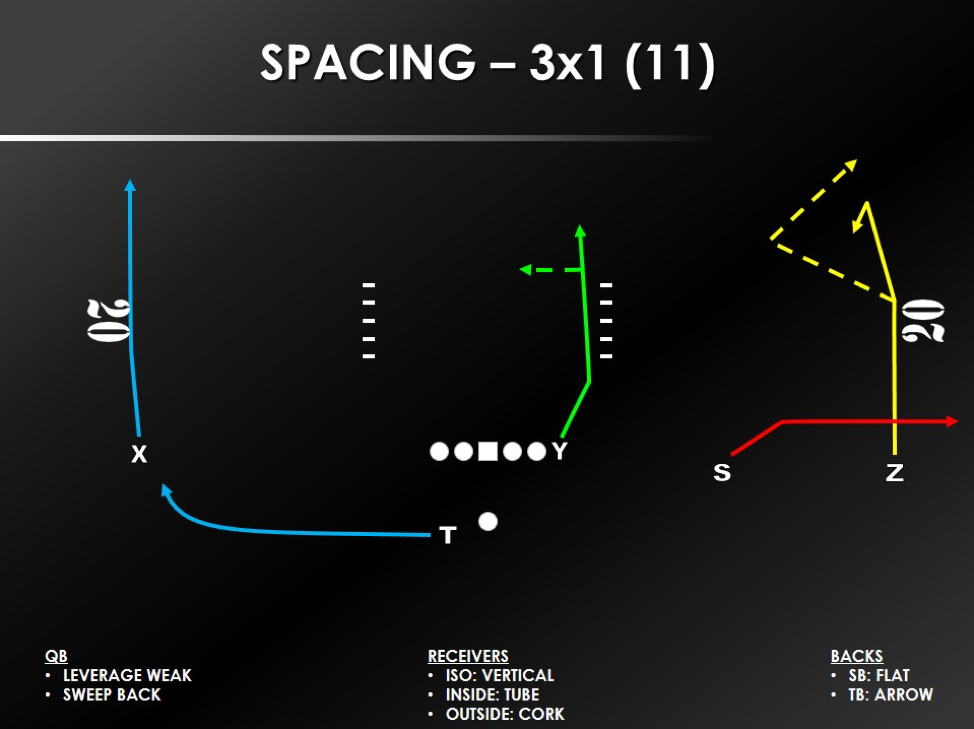 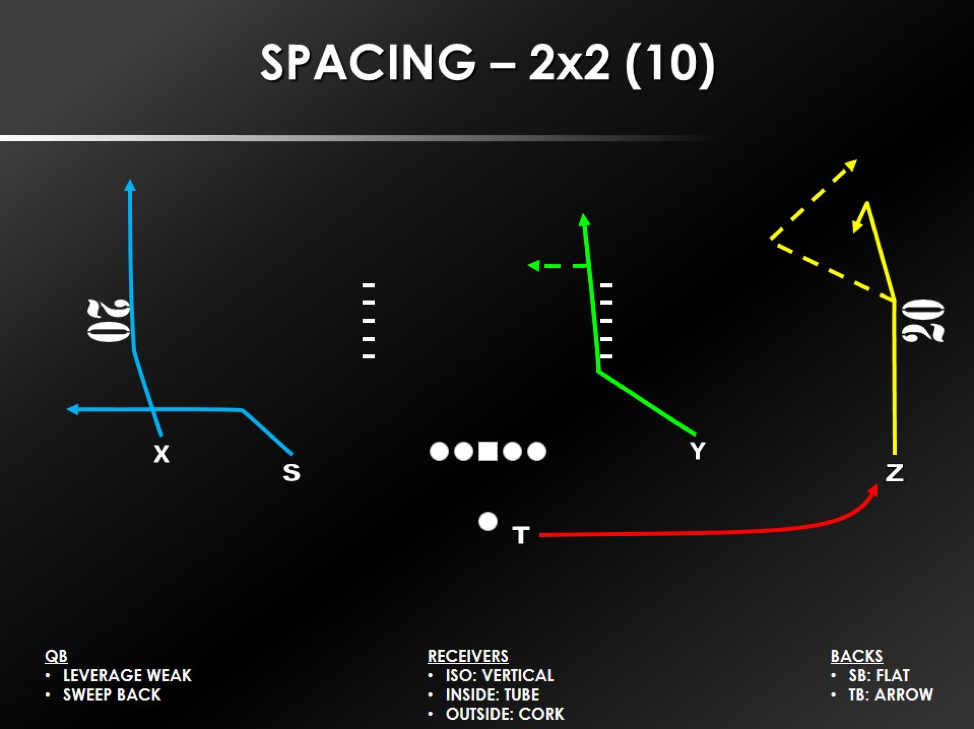 This spacing concept is a great staple of the passing game. It combines the best of everything you are looking for. It is simple assignments, fits all personnel groups, can be applied to any formation and can be run in any situation. The most undervalued aspect is that the routes make you right as a play-caller. It doesn’t matter how you teach coverage or what coverage you see, you have built-in answers without the players having to learn and identify different coverage shells. As a play-caller, you can call the play thinking you will be getting man, and if they end up in Cover 2, Cover 3 or Quarters, you still have a great and sound play called.