Building an Offensive Line: Fall back to fundamentals 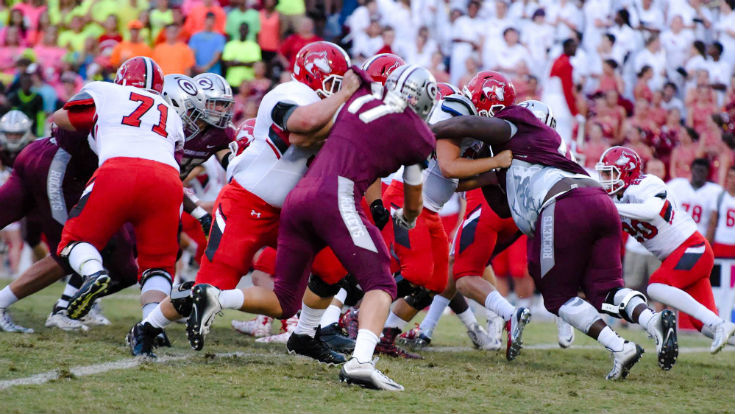 As the season progresses and time is of the essence during game week preparation, skills are best practiced in drills that combine several techniques so that repetitions and individual practice times are maximized.

A good coach looks for teaching opportunities that show up on film, and individual skill and drill sequences are revisited as prescriptive fixes for issues that presented themselves in games.

If your team has a bye week, you and your coaching staff can approach this time in several ways as dictated by the progress of the team. Many coaches often see it as an opportunity to jump ahead and add a wrinkle or two. However, this also is an optimal time to fall back to the fundamental drills that were incorporated back in August during camp.

This is time when we like to go back to some of those progressive step-by-step teaching drills. Revisiting those with the understanding that players have developed through the course of the season can have the effect of making players feel that they are jumping ahead even though in teaching and coaching it is a step back. This is especially valuable for young offensive linemen. That freshman or sophomore who was learning at the varsity level for the first time did not have the game experience under his belt that veteran players brought into camp. For many of those young lineman, not having the framework of game experience to build upon made some of those skills and techniques abstract.

So, step back and give a Day 1 of camp feel that allows young players to take a step back and apply what they have learned so far. What may have not been crystal clear in camp now has deeper meaning.

Here’s an example of how this approach works.

The sequence to teach the drills is step by step. Adequate time exists in camp to slow learning down, create muscle memory and develop understanding of technique in a longer progression.

Each step is combined. There is still a progression, but the sequence went from five drills to three. In most weeks, one or two of the drills are used based on the coach’s feeling of how much is needed to reinforce technique. It all now fits together for the player step by step.

Stepping back to a camp progression allows for more attention to detail. Again, the segmented drills are used during the season as prescriptive fixes, but in the short time available for each week, there must be a focus which is sometimes dictated by game plan and opponent.

The slowdown is also mentally good for players. Of course, there is a sense of urgency for the game in two weeks, but now learning and improving receive more of the focus rather than a specific game plan.

We will still work some things that move us ahead, but falling back on fundamentals allows everyone to jump forward in their skills.