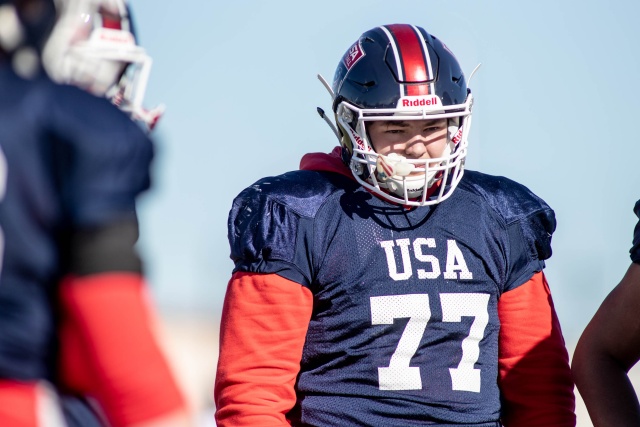 Not every high school team has a scrimmage with another school prior to their first official contest. For those that do, this scrimmage can be quite telling of where your players are at in their development, their understanding of the offense and defense, and if they’re mentally prepared to participate at the varsity level.

The host of the Coach and Coordinator podcast, Coach Keith Grabowski, sees plenty of opportunities to evaluate your players from the big-picture perspective on defense, offense and special teams.

On the defensive side, Grabowski states that this should be a situation where you focus on your base defense, with little to no preparation for the opponent. “If we can line up and adjust and play our base against anything, that’s a really good sign coming out of week one,” says the former high school and Division III coach. “It’s high school football, and there’s more things that are variable in high school football from week to week than you might see at the college level or the pro level.”

Grabowski continues, citing that the offensive schemes you see every Friday could be drastically different. “You’re going to see teams maybe come out in funky formations that you hadn’t planned for when you’re on defense. They might focus on a different package because their quarterback changed [or] someone was hurt,” adds the podcast host. “On the defensive side of the ball, you need to line up, and play your base and adjust out of that.”

For your offense, pre-snap operations and recognition of coverage are two points that Grabowski highlights. “What’s the quarterback seeing right now and how can we help him get better? [Help him] better understand what he’s seeing,” emphasizes Grabowski. “What has he focused on? Where is he looking?”

Coach Grabowski goes on to recognize the fact that your quarterback may not have seen this defense before, saying that it’s better to advise and teach, rather than get upset. “Again, thinking in terms of, ‘Maybe [your quarterback] hasn’t worked against these types coverages, maybe he hasn’t seen that kind of rotation before,’ because you don’t necessarily game plan for a scrimmage,” says Grabowski. “Help him understand and help him learn from those situations. It’s looking at what opportunities on tape we have to teach and learn from so in the future he can have success.”

Special teams in scrimmages are generally not full contact or full speed in terms of making a play or a tackle. Player safety is a point of emphasis, however, it’s also important to get players as entrenched in the learning process as possible. “There’s still things for you to focus on,” adds Grabowski. “If you don’t look at this film that you have of those particular plays, I think you’re missing an opportunity. Believe me, I’ve been guilty before. I can remember as a young coach looking at those scrimmages and thinking, ‘Okay, I want to get to my offensive or defensive responsibility. We really didn’t run a full-speed rep here, so I’m not too worried about it.’ But the truth is there’s a lot of things you can be coaching up.”