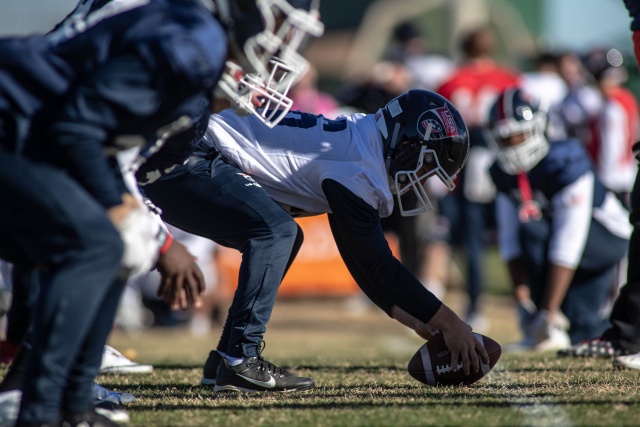 Cooperating and focusing on a symbiotic relationship between coach and official was a staple in Coach Keith Grabowski’s tenure as a head football coach. “I think it’s very good to have [your sideline official] in your corner, at least [knowing] that you have his back and it’s not going to be difficult for him on your sideline,” says Grabowski.

There are several keys to communicating with the officials for your team and coaching staff. To start, Grabowski points to introducing yourself as the head coach. “Always make sure you have the opportunity when you greet them to give your name and get their names,” says the Coach and Coordinator podcast host. “If they don’t give you a card, usually they do, write [their names] down. I would always highlight the guy who’s going to be on our sideline. I’d especially want to spend some time with him.”

As this is the official that will be in closest proximity to you and your team, most of your time will be spent speaking to this specific official. For you and your team, Coach Grabowski states that the only person talking to that official should be the head coach. “I always let [the official] know, ‘Hey, I’m going to be the only guy talking to you on the sideline. I will not have any of our coaches chirping at you. If you hear anything coming from our sideline that you don’t like, please let me know and I’ll take care of it.’”

Grabowski also points to having information readily available for the officials in case they need it. “I’d like to have a card for the officials,” says the former coach. “That card would have my captains’ numbers. I would designate a speaking captain for each side of the ball. [However] there are also situations where your captains aren’t on the offensive side. So, you [may] need to designate your quarterback as the speaking captain there. That’s always what I would note on there – who would they go to if there was a penalty and [the officials] needed to communicate.”

Grabowski added more to the card he handed to the official, making sure they had more than they needed from him. “I also put on there the [dominant] hand of our quarterback and if our kicker and punter were left-footed or right-footed,” says Grabowski. This was in order to help the officials in terms of positioning.

The podcast host added his contact information as well the athletic director’s in the case that the officials would need to get in contact with either of them postgame. “The whole idea is I wanted to communicate that ‘We’re working with you. This isn’t going to be an adversarial relationship. We want this game to flow efficiently from both sides.’ The communication should be clear and concise both from us and from them,” adds Grabowski.