The 50th Anniversary of the 1969 National Championship 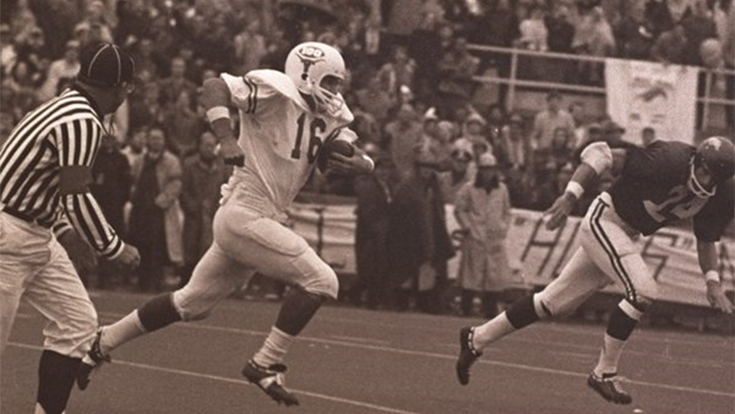 This year, college football is celebrating its 150th anniversary. Over the course of its century and a half of existence, the sport has produced countless great games, superstar athletes, legendary head coaches and bitter rivalries that span ages. However, only a few select moments in time have been so monumental and important to history that they’ve earned the “Game of a Century” title.

In Fayetteville, Arkansas on December 6th, 1969, the worlds of college football and American politics collided for a game that would be one for the ages. The number one ranked Texas Longhorns went on the road to take on the number two ranked Arkansas Razorbacks. “The Big Shootout,” as it would be known immediately afterward, was truly one for the ages.

The game was firmly rooted in history from the start, as it featured the two best college teams in the south fighting it out for the Southwest Conference title. Larger than life personalities abounded on both sidelines. Hall of Fame coaches headed both teams – Darrell K. Royal for Texas and Frank Broyles for Arkansas. However, these two game titans weren’t the only big names there on this particular day.

The sport was celebrating its centennial in 1969, so the broadcasting company, ABC, wanted to do something special to commemorate the season and the clash of two power houses. The executives reached out to none other than President Richard Nixon, with the plan being for President Nixon to name the winner of this late-season game the National Champion.

The legendary Rev. Billy Graham gave the pre-game prayer. President Nixon arrived on Air Force One and was joined by then-future President George H.W. Bush and Arkansas Sen. William J. Fulbright. All of the metaphorical stars had aligned to make this game one for the nation to remember.

On the field, the Longhorns were an offensive juggernaut thanks to their still novel wishbone offense. The Razorbacks were riding a 15-game winning streak – not having lost a game since their defeat to Texas the previous year in Austin – into this epic clash.

After a sloppy start by the Longhorns, Arkansas got up early. Following a one-yard run by running back Bill Burnett in the first quarter and a 29-yard reception by future College Football Hall of Famer Chuck Dicus in the third, the Razorbacks were up 14-0 at the start of the fourth.

Then the drama really began.

Longhorns quarterback James Street led a masterful drive with his arm and legs. A touchdown and two-point conversion got the Horns back in it 14-8. Arkansas quarterback Bill Montgomery drove his offense down to the Texas 7-yard line. On the ensuing play, Texas intercepted with time waning.

Street called Right 53 Veer Pass, a play not even in the Texas playbook. He threw a 44-yard strike to sure-handed tight end Randy Peschel, who made a sensational over-the-shoulders catch that got the Longhorns to the Arkansas 13-yard line. Two plays later, halfback Jim Bertelsen ran in the game-tying score and the ensuing extra point gave Texas the lead.

Arkansas drove deep into Texas territory on the next drive. Their goal was to give All-American kicker Bill McClard a chance at a game-winning field goal, but Montgomery was again intercepted on the Texas 21-yard line with less than a minute left to put the game away. Texas would win 15-14.

After the game, President Nixon gave Texas a plaque commemorating them as the 1969 National Champions.

Nearly 50 million people watched the game that day. Texas would accept an invitation to that year’s Cotton Bowl Classic where they would defeat Notre Dame 21-17 to cap off their undefeated season.

However, in that same year’s Orange Bowl, controversy was further added to this story. Joe Paterno and the Penn State Nittany Lions would defeat the Missouri Tigers 10-3 to cap off an undefeated season of their own. Texas and Penn State never settled their differences on the field, and it would continue to be a sore point for Penn State and its fans for years to come.

In 1973, speaking at a commencement ceremony, Paterno would quip: “I've wondered how President Nixon could know so little about Watergate in 1973 and so much about college football in 1969.”

Texas would continue its winning ways under Royal and would repeat as National Champions in 1970. He would retire at the height of his power and popularity to become the Longhorns Athletics Director in 1976. Broyles also retired in 1976 and become the lead color analyst for ABC from 1977 to 1985.

This much celebrated game has been the subject of countless stories, books and even films, remaining a prime example of everything that makes college football great.