A Coaching Opportunity That I Couldn’t Say No To 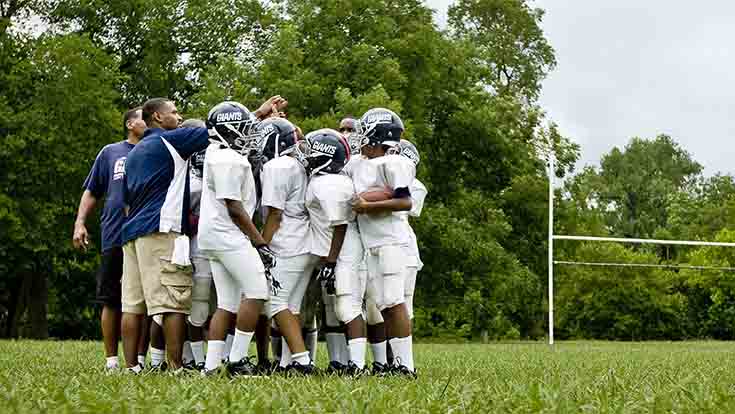 When my oldest son started playing football at the age of four, it was my first experience coaching youth sports. I didn’t intend to coach, but on the first day of training camp back in 2009 the director of the program told me that I would be the Head Coach of my son’s team.

I really didn’t think I was qualified to be a coach, let alone at the “peanut” level. Yes, I’ve been a football fan forever and I’ve covered sports for many years, but I never played the game in an organized fashion and I had certainly never coached before. That being said, I really wasn’t sure that I would be able to teach a child any fundamentals or techniques of the game.

I convinced the program director to find another coach and he did, but the new coach asked me to be his assistant. Since I didn’t have to do any real “coaching,” I was more than happy to help hold a bag during drills, keep track of substitutions and just try to be a good liaison between the parents and the Head Coach.

After that season, I really didn’t want to be a coach. I just wanted to be a dad who helped out by being on the chain gang, being part of fundraisers and even doing public address – which I did for a few years. I never had any intention of coaching, even when my youngest son started playing flag football.  I respect all the men and women who are volunteer coaches in youth sports, but it just was never something I was comfortable with.

But just like they said in The Godfather, “Just when I thought I was out, they pull me back in.”

That was the case last week as both my sons were getting ready for their flag football seasons to begin. My youngest already knew who his coach would be, but when I received an email with the roster for my younger son’s team, there were no coaches listed. Then the next day, there were two coaches on the roster and one of them was the father of my son’s friend which made us all breathe a little easier.

The easy breaths stopped the next day, when I received a phone call from the coach listed who told me that neither him nor the other father had volunteered to be coaches. The league had just put their names down hoping that they could just keep the sideline in check since the athletes at this level basically call their own plays anyway.

The father, and new coach, asked me if I could help on the sidelines by tracking playing time and substitutions, mentioning I could also add whatever thoughts I had into plays. I only needed a few seconds to think about it before agreeing to do it because it was an opportunity to help in a stress free and fun environment.  At the first “scrimmage” this past Sunday, another parent even offered to help, so it became quickly apparent that coaching was going to be a true team effort.

I never thought I would say or write this, but I’m excited and happy to be helping. I’m going to bring a notebook with me starting this week to do a better job keeping track of everyone’s playing time – as that’s why I wanted to help out. I’ve heard, covered and written many stories about playing time, and this was a chance for me to do something about it.

As I’ve stated before, there’s always a chance for a parent to help. In my case, I never dreamed it would be coaching, but I got pulled back into a situation that I just couldn’t say no to.