The Transition from Flag to Tackle 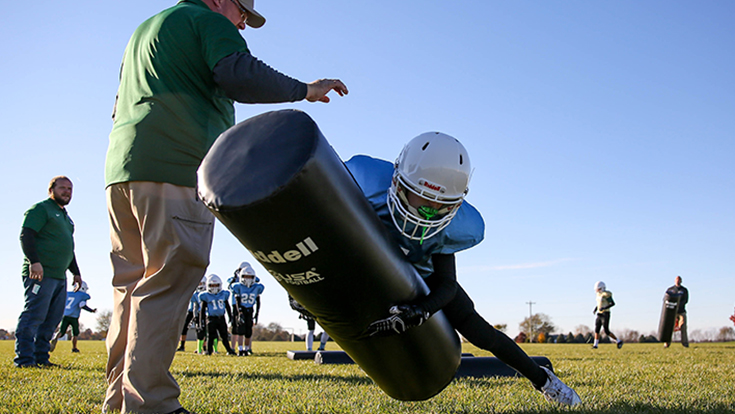 It can be tough for children when they make the transition from a flag football team that usually practices once a week to a tackle team that generally trains three times a week if not more.

Now that we’re well into the beginning of the season and training is in full swing, you’re probably hearing “I don’t want to go to practice.”

Typically, it’s the younger players who, for the first time in their young football careers, are getting a feel for what it’s like to spend more time practicing than playing.

What can a parent do about this? Not much, really.

The nature of tackle football is simply more in-depth compared to flag – there are more intricate techniques, schemes and plays, a higher level of physicality, etc. That being so, there isn’t a need for flag teams to practice as much as tackle teams.

If the parents as a whole feel the team needs just one week with one less practice than usual, they shouldn’t be afraid to suggest it. After all, parents see the negative effects of too many practices at home, especially now when homework and tests are more prevalent. I wouldn’t suggest asking a coach to eliminate one practice each week for the rest of the season, but an occasional shortened week can have positive effects.

If your child is complaining about the number of practices this season, now is a good time to start the discussion about next year. Emphasize to them that there is nothing wrong with returning to flag football and the lesser commitment in terms of practice.

For the rest of this season, monitor your child’s overall health and mental outlook toward the sport. Don’t be afraid to make the decision yourself to occasionally sit them for one of the practices on a given busy week. Call it a mental health day, much like we’ve all done at work.

Continue to celebrate and reiterate successes, like a first tackle or reception in a game, and how much joy and excitement it brings. But also continue to impart on them that those accomplishments during games are a result of that practice that happens in between them.