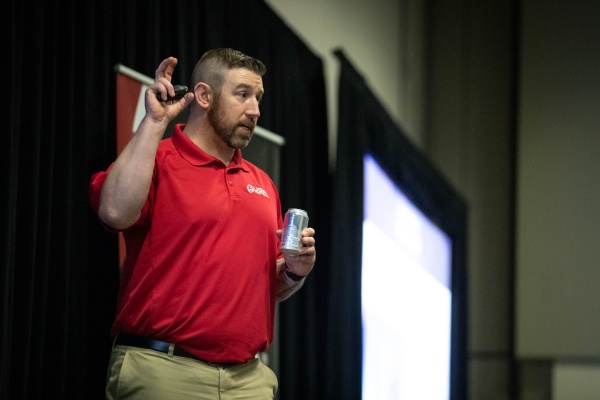 A few opportunities lost in the middle of a tight contest can ultimately cost you and your team the win. If the conference or district race is tight, it could even cost you a chance at the playoffs.

Andy Ryland, senior manager in education and training at USA Football, joined the Coach and Coordinator podcast to discuss how to take advantage of every opportunity presented your way with host Keith Grabowski.

One particular issue younger players – especially quarterbacks – can struggle with is taking the easy, known way out rather than recognizing broken coverage or another mistake in the defense. “Sometimes with our money plays where you run a particular play and know this guy is normally open on the crosser, we’re going to take that shot and we’re always going to hit the over and it’s good for the first down and it’s fantastic,” begins Ryland. “But, if we’re running some sort of bootleg action, we’re going to have our flat route, we’re going to have our over and we’re clearing out with a wide out on that side, what happens if the wide out is running free?”

The former Penn-State linebacker then points out an attribute he loves to see in good teams, the ability to take advantage of opportunities, “Good teams are absolutely ruthless in punishing your mistakes,” says Ryland. “If somebody blows a coverage, well, we want to hit it and we want to hit it big. We want to put points on the board.”

Preparing for these opportunities doesn’t have to be strictly in the film room believe it or not. This can start with running plays against the scout team or against your first-team defense. “What if you called that money play [and] bootleg and before the play you just kind of whispered to the cornerback or the safety depending on who has coverage responsibility, ‘Hey, let the clear out go.’ And we’re going to let the clear out get behind us and we’re going to check to see if the quarterback is really reading the whole field.”

Ryland then continues with the scenario. “You could do [this] in any situation. I think I gave the bootleg example because it’s very common and guys feel very comfortable who’s going to be open on that route … Quarters might be a great coverage to practice this against because if we get verticals even, again, we’re not talking a true four [verticals] … once it turns into man, any one of those guys could lose their one-on-one battle and any one of our players could be absolutely free, wide open.

Opening the play and telling your defensive players can clearly display as to whether or not your quarterback is genuinely progressing through his reads and always looking for the big play. Ryland finishes with this, saying that answering these questions can determine if your team and your quarterback are taking advantage of every opportunity, “Are we seeing the field? Are we being ruthless? Are we trying to punish mistakes?”