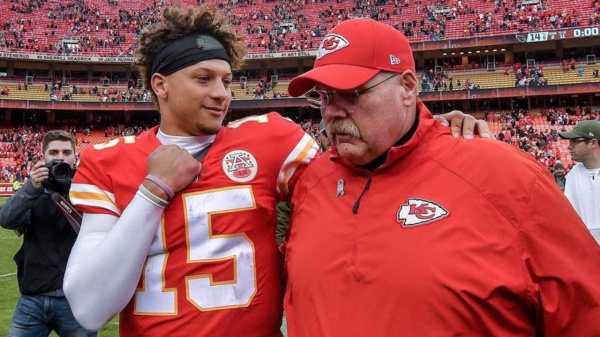 Andy Reid is without a doubt one of the best offensive play callers – and play designers – of all-time. For over two decades as a head coach he has given defensive coordinators headaches with his play design and phenomenal usage of personnel.

Last season I “cut-up” the Chiefs passing game. One of the first things I noticed was how they were utilizing “4 strong” in the passing game. That is tough to defend.

Here it is drawn up: 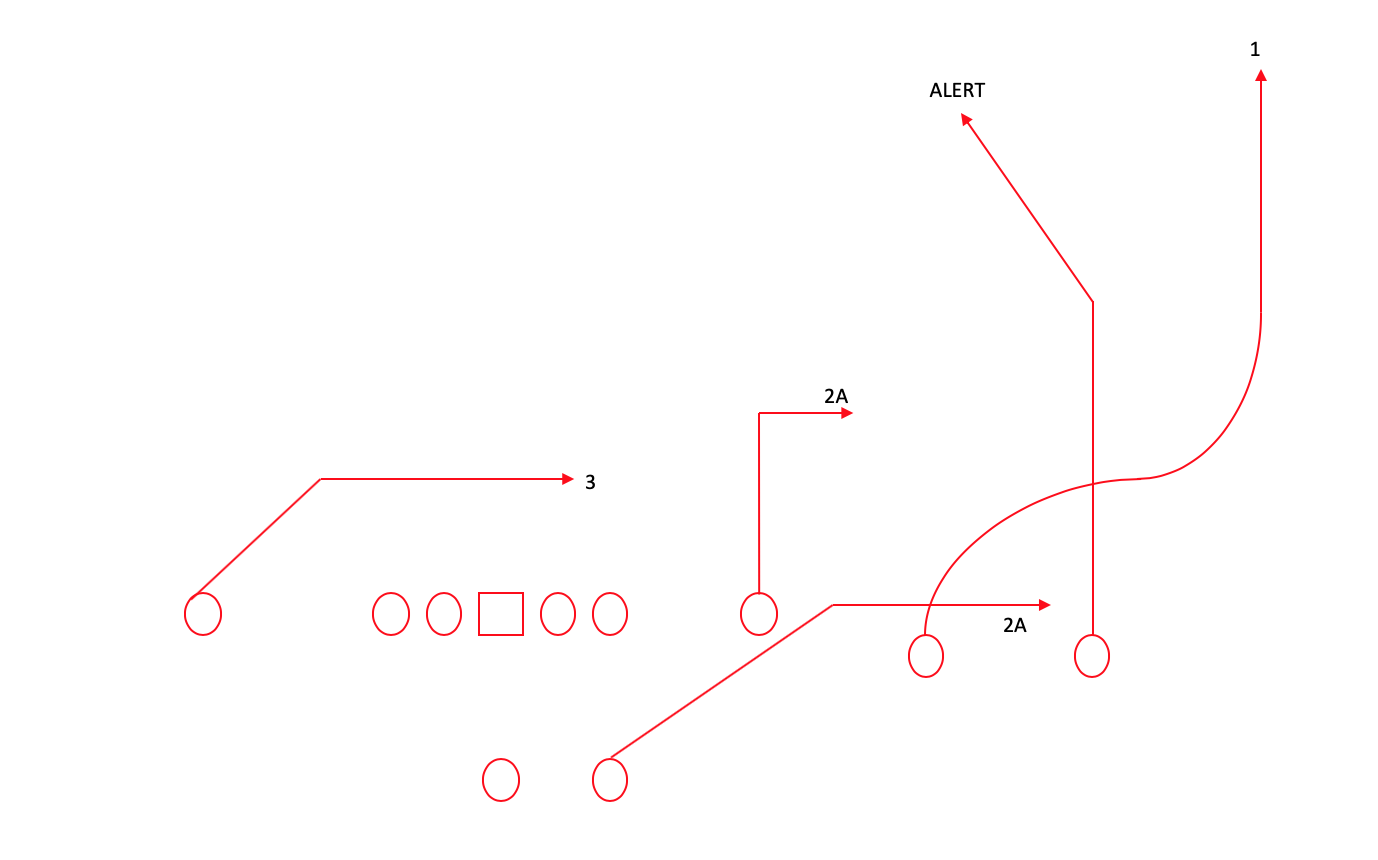 As you can see, this creates four receiving threats all going in one direction. That’s tough on a defense as it drains out zone defenses and creates traffic to fight through in man coverage.

The first defense we’ll look at Post-Wheel Flood against is Quarters. I common check against Trips while Quarters is what a lot of coaches call “Solo” – or “Poach” – or “Zone It.” There are many names for it, but what it entails is the defense plays Cover 4 (Quarters) over the No. 1 and No. 2 receivers while the Mike linebacker plays the short wall of No. 3. The weak safety is reading No. 3 to No. 1 strong. If No. 3 is vertical, he plays No. 3 vertical.

The Will linebacker is playing man-to-man on the No. 4 player, which is usually No. 2 weak (the running back). 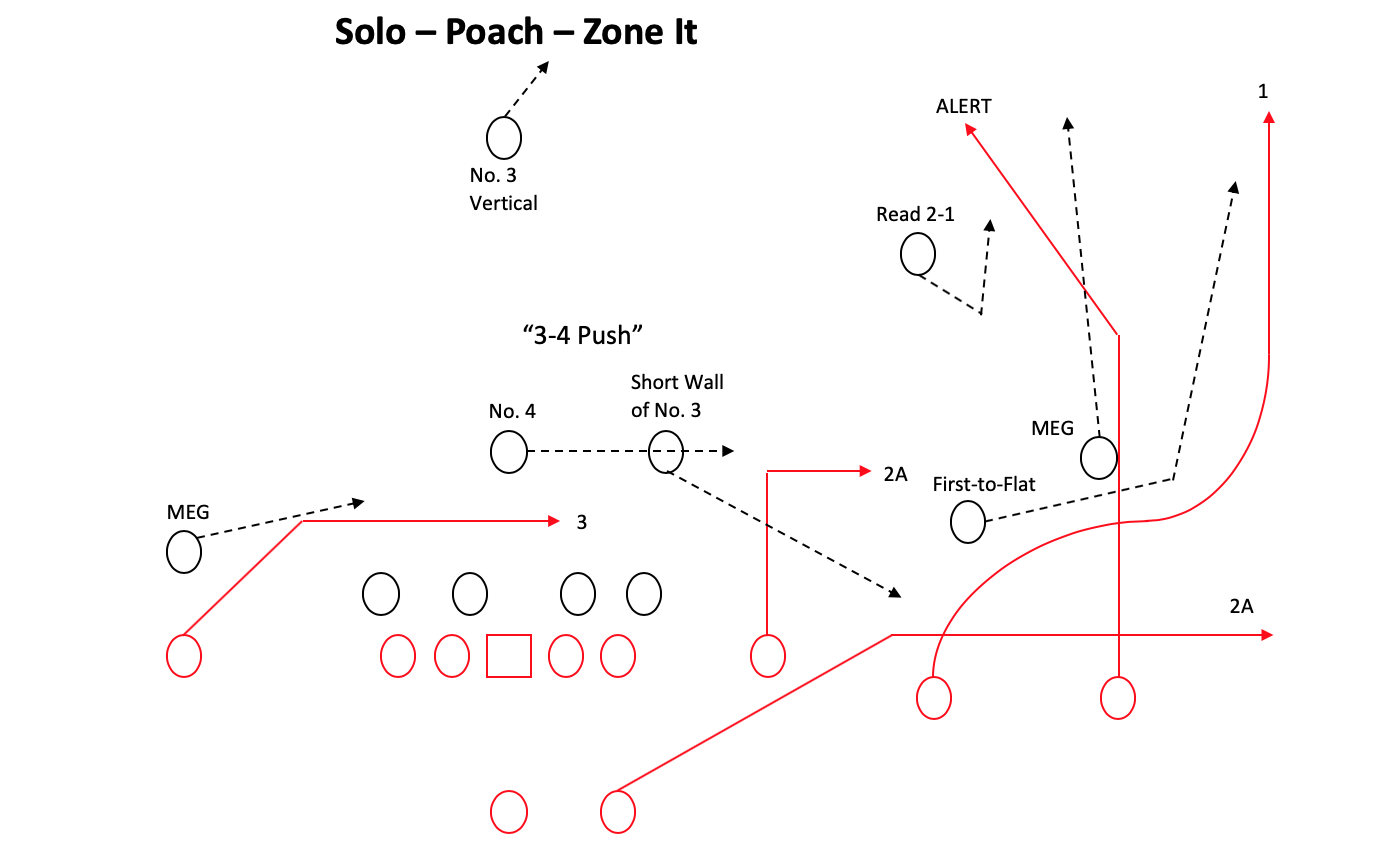 As you can see, this is how “Solo” would play out against Post-Wheel Flood. The corner is playing MOD on the No. 1 receiver. He is playing man-on-deep. He is going to play man coverage on every route deeper than 6 yards. Against this post route, he is playing on top of it.

The outside linebacker, or Nickel defender, is playing the quarter flat. He is taking the first thing in the flat. If No. 2 is out now, like he is with Post-Wheel Flood, he is taking him man-to-man. He has to take the wheel route through.

It is tough for the Will linebacker to play a weakside gap run fit and get over to the trips side to play an out route by the pre-snap No. 3 receiver.

You must respect the weakside run fits because Kansas City will run RPOs from 4x1.

If the flat defender does not carry the wheel route, the Quarterback is taking his eyes to that wheel route to see if he can hit. If the defense matches the wheel, he will come back to the 10-12 yard out route and flat route combination.

Now, let’s check out how this would play out against a trips check “Stubbie” defense. 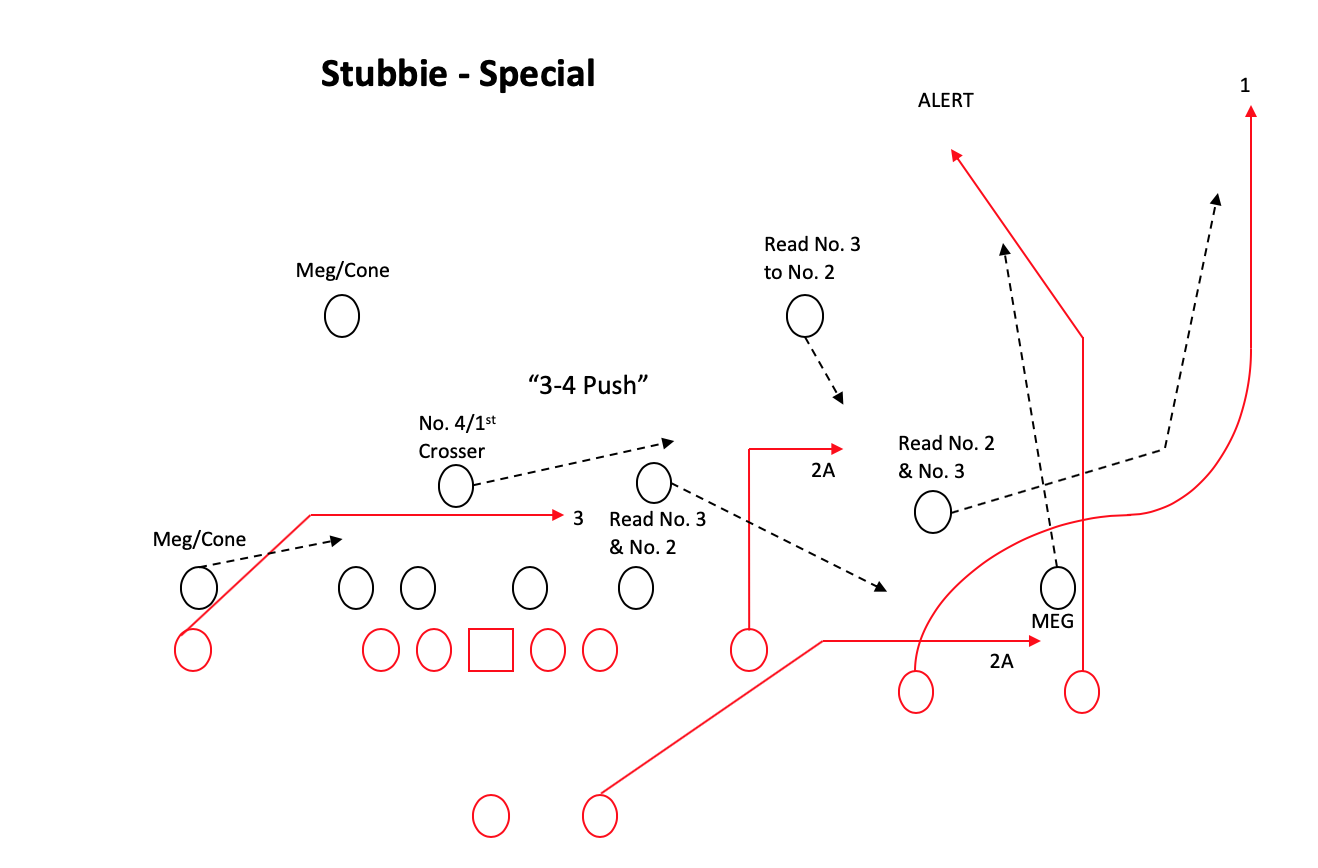 In Stubbie, the corner is playing Meg on the No. 1 receiver, so he will play the post of No. 1.

The outside linebacker, or Nickel, to that side is reading No. 2 and No. 3. Once No. 2 is out on the swing route, the Nickel will take him man-to-man through.

Once the call-side safety who is reading No. 3 to No. 2 sees the No. 2 receiver out on the wheel route, he is going to pack it in and look to play No. 3.

You can see in the clip above a how the Sail/Out route from No. 3 is ran. He feels the defender sitting outside of him, so he sits his route down in the hole. The defense is playing the coverage described above. Palms over the No. 2 and No. 3 receiver with a "3-4 push" inside between the mike linebackers and the will linebacker.

The quarterback reads the flat defender carry the wheel so he snaps his eyes back to the curl defender. The curl defender is expanding to the curl and he knows that No. 3 on the Sail/Out route will sit his route down in the zone. Great anticipation by Mahomes and Kelce here.

Again, the coverage is drained, and the stick route should be an easy completion as the two defenders playing it (the call-side safety and the Will linebacker) are playing it from depths that aren’t desirable. The completion should be made.

The ideal Cover 4/Quarters check against this is a version where you are playing “Palms” over the No. 1 and No. 2 receivers. Now the corner to the call will take the wheel route through while the safety will play over the post. This allows you to leave the outside linebacker, or nickel, in the flat. 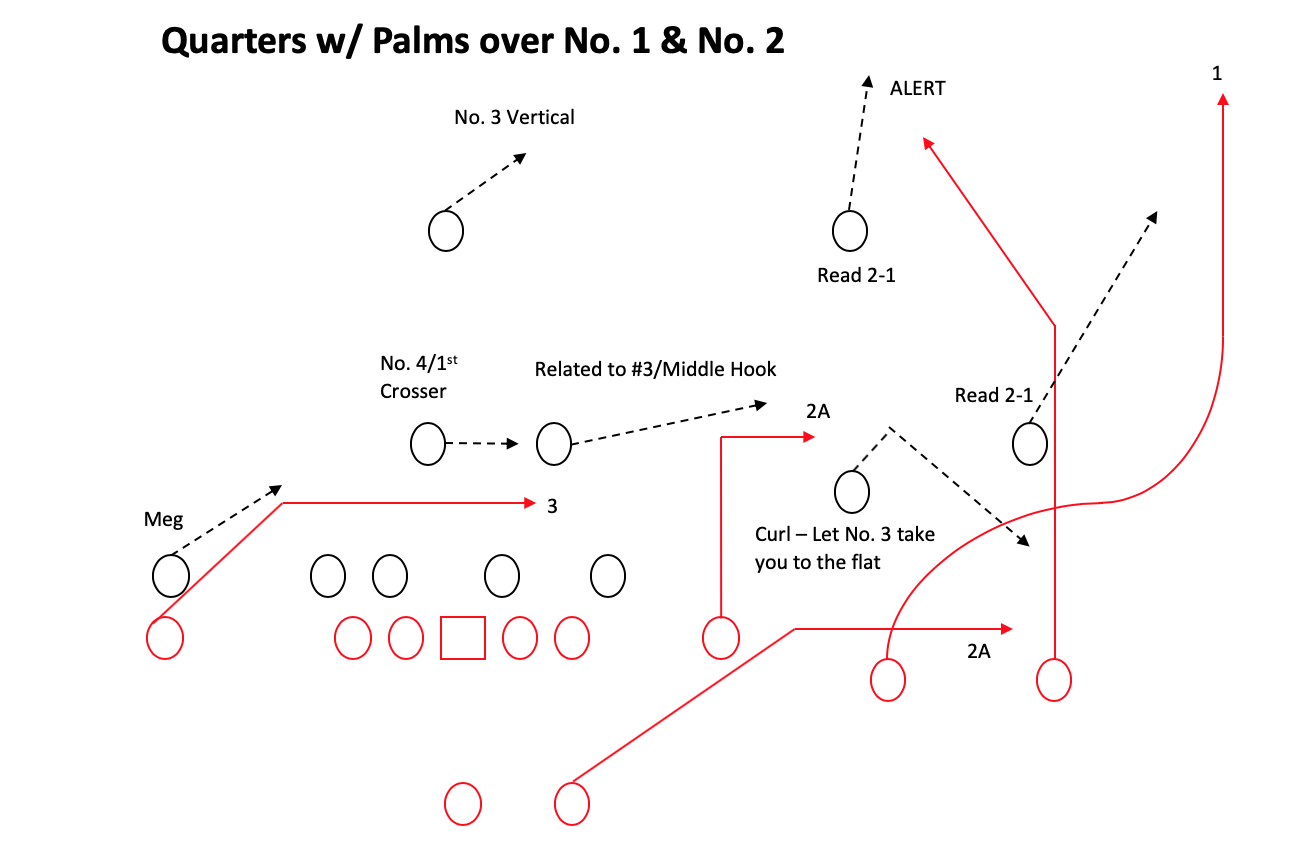 He will expand to the curl to play the possible of curl by No. 1 and play the flat route by the No. 4 pre-snap (running back) while the Mike linebacker can expand to No. 3, playing the middle hook and hang on the out route.

Let’s talk about how this plays out against Cover 3.

In the NFL, the fad has become playing Cover 3 Weak Buzz, meaning the defense is rotating to the weak hook in Cover 3. They do this often because in Cover 3, the weak hook player has to play the No. 3 receiver on the bender route. Think “All-Go Special” with No. 3 on the bender. It is better to have a safety playing that than a linebacker.

So, here is Post-Wheel Flood drawn up against Cover 3 Weak Buzz, with the defense playing landmark drops instead of pattern matching. 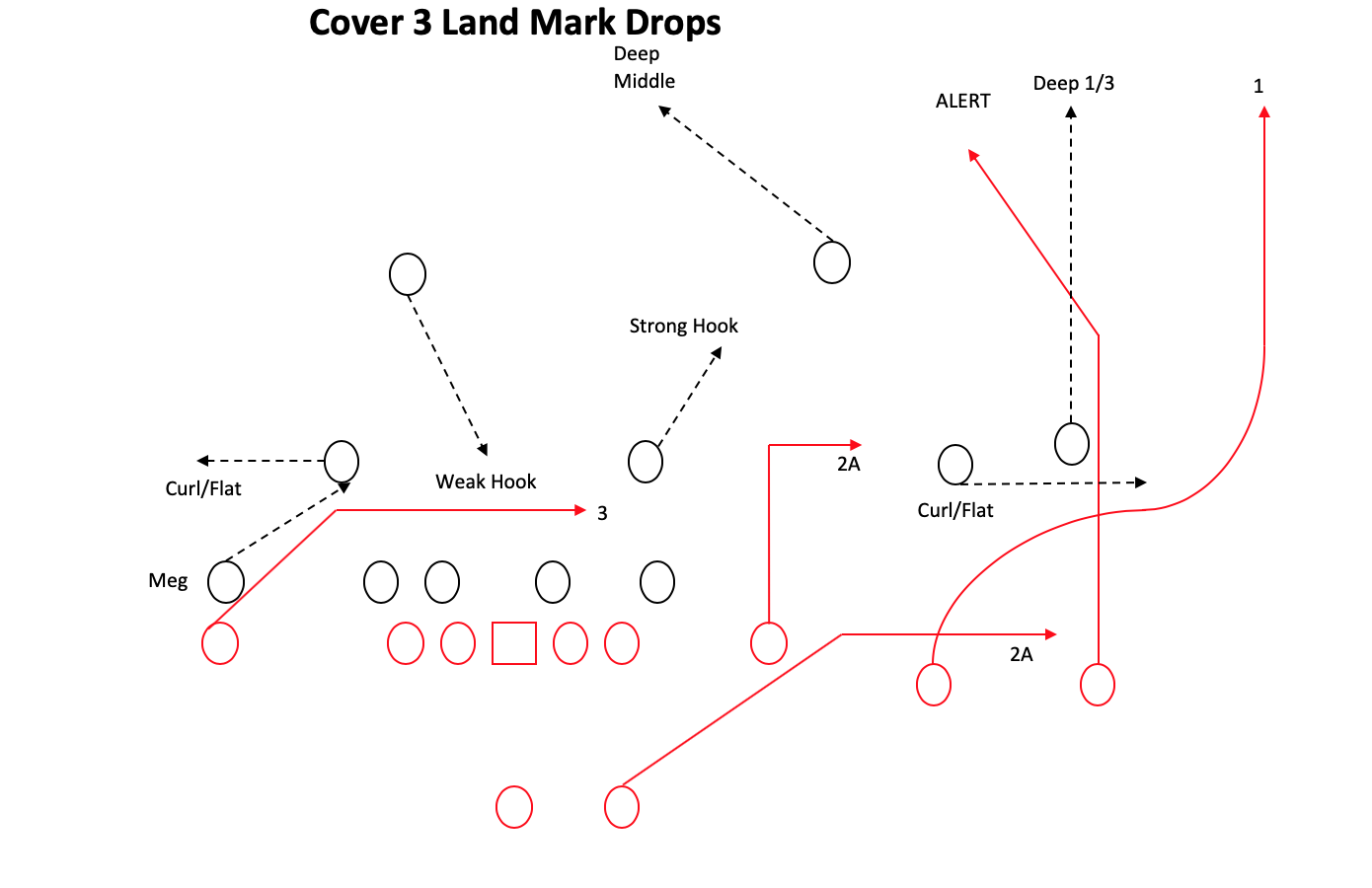 This is why you want the quarterback’s first read to start with the wheel route. In Cover 3 with landmark drops, the deep-third defender to the side of the trips is going to mid-point No. 1 and No. 2 while the curl/flat dropper expands to the curl through to the flat.

With the No. 2 receiver on a wheel, that is tough for the corner to mid-point and cover both routes because they are on different levels. This gives you a chance to hit that wheel route with the curl/flat defender sitting in the flats and playing the flat from No. 4.

You can see Mahomes in the clip above feel that flat defender drop the wheel route. He knows that he has the wheel route now in 1-High zone so he bangs it in there. You can also see Kelce in this clip on the Sail/Out route sit his route down with the curl defender sitting just outside of him.

Playing normal Cover 3 against this stuff is asking for trouble. You need to flood the coverage to the trips side.

When you play 3 Flood, what many hear as 3 Mable or 6 Skate, what you are doing is pushing the underneath defenders under one zone to defend the trips side.

As the offense floods the coverage with receivers, so does the defense. 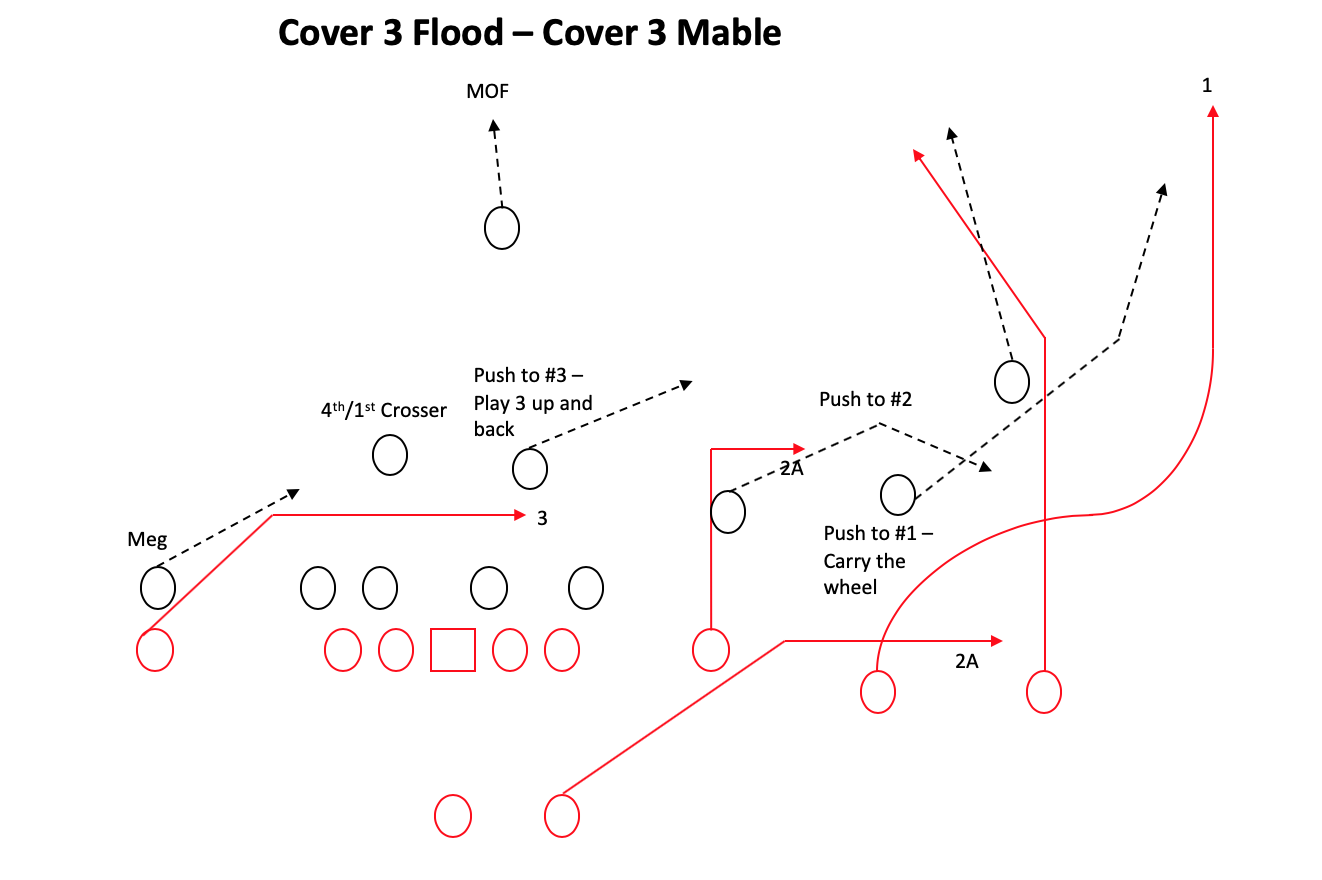 With Post-Wheel Flood, the strong flat defender is going to end up running with No. 2 on the wheel route. He doesn’t carry No. 2 vertical on a seam but takes No. 2 through the flat like he is on a wheel route.

For matchup reasons, it’s best to play Cover 3 Mable though. That ensures that you are getting your best pass defenders - defensive backs - playing the pass, while the linebackers are fitting the gaps and playing the run.

In the clip above you can see how this concept plays out against Cover 3 Flood. The flat defender carries the wheel, the curl defender expands to the flat fast and the strong hook defender has to stay inside and on top of No. 3 to play the bender, giving the Sail/Out route leverage outside.

Kelce feels the curl defender expand quickly to the flat so he knows he is coming out of that break and not sitting down. Another good read by Mahomes and route by Kelce.

Another way to play this is with weak rotation, so you mess with the RPO game against a 4x1 formation. You would rotate a safety down into a weak sky or weak buzz alignment.

With weak rotation you can sometimes mess with offensive line rules. If they’re running outside zone, they’ll point the linebacker as shown – meaning double team is working to him – and they’ll read the first second-level defender back from him.

So what happens is they’ll end up either:

The Chargers did this in 2018 against the Chiefs. They aligned the safety at 8-10 yards deep and over the center. The offensive line didn’t account for him in the blocking scheme and he was an unblocked player. They were reading a defender that had no run responsibility in the box.

That’s why I like weak rotation against four strong, at times. Pre-snap you give that two-high shell look and it appears like you’re in some sort of Cover 6 or Cover 4 look and the offense is advantageous to run the ball.

Against the four strong stuff, you can also just play man-free coverage. Problem with that becomes the defender covering the running back on the flat route is going to be outflanked and has to fight through traffic to get to him. Also, there is a chance you are going to have a mismatch issue somewhere that can make you pay. 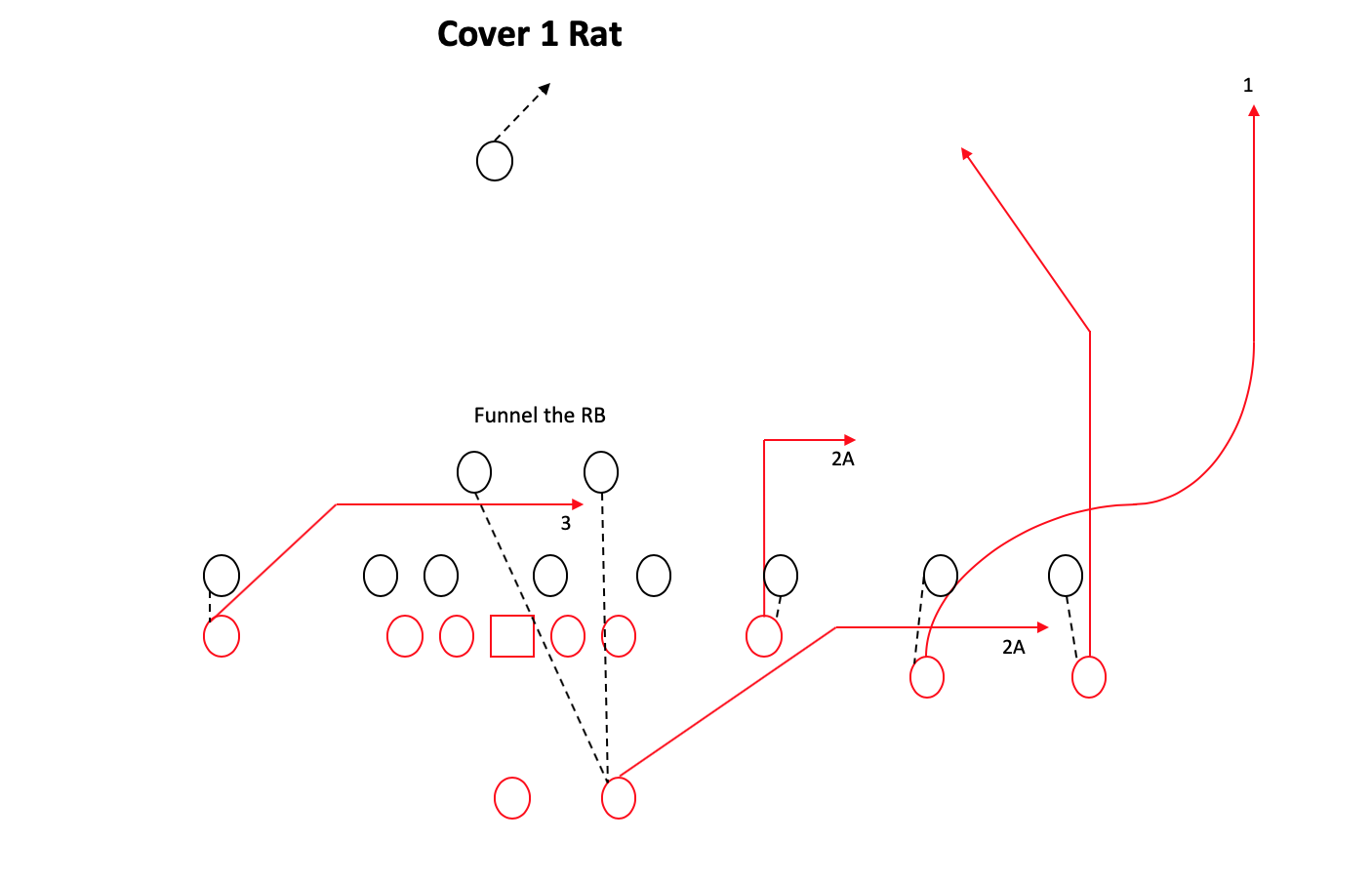 The quarterback will still read the concept the same as he does against every coverage, but often times when it is man coverage, the ball is going to the running back on the flat route due to leverage and mismatch.

This is one example of “4 Strong” – or “Load” – concepts stress a defense. It forces them to pass things off on the fly, you are truly flooding zones in zone coverage and creating mismatches for your offense.

The last thing a defense wants to do all week is go over and review with their defense how they’re going to handle this stuff. You don’t see a lot of “4 Strong” stuff so when you game plan for it, it forces you to reiterate the rules on how to play it to your defense.

This is just one “4 Strong” concept that Kansas City runs and how it stresses defenses.