Different Positions Working Together to Address “The Dude” 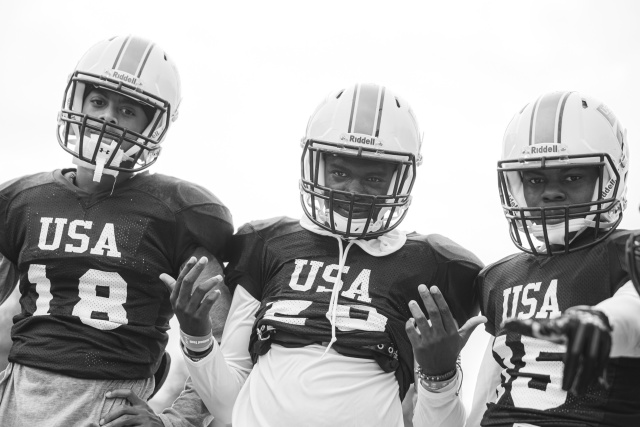 The Coach and Coordinator podcast is in the middle of several in-season series, bringing in former coaches and players to address issues coaches all over the country deal with mid-season.

Andy Ryland is one of those former players, having played linebacker under Joe Paterno at Penn State. Co-hosting the “Deliberate Practice” series, Ryland and Keith Grabowski detailed how to counter your opponents’ best player, otherwise known as “The Dude.”

Generally, when a coach and his team begin preparing for an elite-level player, they prepare separately. Thinking in a logistical manner, this doesn’t make much sense. Why, if two players are working together on game day, would they practice separately?

Ryland, also the senior manager in education and training at USA Football, advocates for this. “I love the attention to the totality of the game plan,” says Ryland. “Traditionally we can look at the practice and write, ‘When we go to our one-on-ones, the running backs are going to go with the linebackers and maybe they’re doing their pass rush one-on-ones, and the defensive line is going with the offensive line. But, if you’re plan that week is to double a guy [with a back and a lineman] does it make sense to have one of your running backs work some, not all, [getting] a few reps so it becomes a two-on-one where they’re trying to double in that situation.”

Continuity and being on the same page is emphasized in these circumstances. When dealing with a talented player, your team must have their A-game ready. “We’ve all seen [it]. Whether it’s Friday night, Saturday or Sunday, those examples where the offensive player over or under sets expecting the help and the timing and the spacing isn’t right … you need to make sure it is taken care of as far as the timing of the passing concepts.”

Now, what does this look like in practice? It may be easier than one might think. “It can be as simple as putting out a pop-up dummy or a trash can during your 7-on-7 period,” adds the former Nittany Lion. “Your [halfback], your slot receiver, your running back isn’t allowed to release into the pass route until he gets a two-hand tag on this trash can. So, we make sure that he is releasing, touching, stopping his feet and then getting out into his route. Just as a way to manipulate and manufacture the timing.”

The bottom line of it all being that having players physically performing what is asked of them is much more effective than simply understanding why they’re doing it. “We want to get the chemistry, the timing, whatever words you use, down, not just the understanding of the ideas because it is changing the set slightly for both players when they know where their help is.”

This idea of getting players to work together in this context is not specific to linemen and running backs either. These situations can include multiple linemen, specifically in the case of dealing with a pesky nose tackle or defensive end. “I think I see [working together] most often on the line play,” says Ryland, “when we’re [going to] double a guy and maybe it’s going to be our center and guard and we’re always going to go [a specific] direction. Now, if that outside set by the guard is going to be a little heavier because he’s expecting help from the center, or if our free guy is always going to float to this particular spot, are we good with the sets? With the footwork? With the mechanics? … We may have introduced [that change] five, six weeks ago in preseason camp, now we need it under the bright lights and you only have four days to get ready. So, we’ve got to maximize that time.”