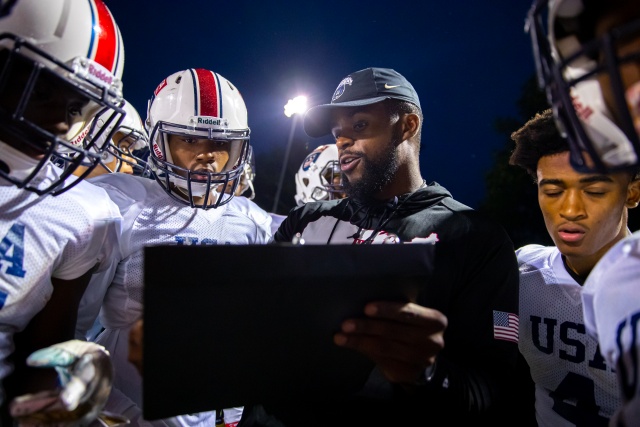 If you’ve read any of USA Football’s blogs pertaining to the use of technology in football, you’ve probably read a little about Rob Everett. On the Coach and Coordinator podcast, Everett rejoined the show for “The Edge” series, speaking with host Keith Grabowski as to how coaches can use virtual reality (VR) during the season.

There are not only mental but physical benefits to working with VR during the season according to Everett. “With the physical demands that a season has, you have to think smart,” begins Everett, the former assistant coach of the AAF’s Memphis Express. “Everybody is starting to get ready for the playoff push. The goal is not 10 games, nine games. The goal is 15, depending on your state, 16, 14 whatever it might be. That’s essentially an extra third of the season that you have to play! Legs get tired, that’s a real thing … So, what are the things that can be taken off the field that won’t harm the process? Virtual reality can really take the place of those walkthroughs or those things that you’re doing that every coach is doing on the field.”

The two uses of VR Everett highly recommends involve pre-snap recognition. “They’re the easiest things to duplicate in simulation because it all happens before the snap. The most powerful are blitz pick up for the offensive line and protection identification, which involves the quarterback and running backs in addition to the offensive line,” says Everett. “[The other is] formation recognition for the defense.”

The recommendations don’t stop there for the former Bridgeport College (Va.) defensive coordinator. “The one that kind of gets lost in the shuffle here is punt protection identification,” adds Everett. “That’s a big push on the highest level because you look at the NFL rosters, [they’re] limited, so there’s some top-end roster guys that have to play special teams … I’ve been at some NFL practices when it’s special teams period, and there’s some people that are straight up hiding [to avoid special teams]. I’ve also seen some teams that are using virtual reality to train for it and they’re able to show for example 10 to 13 punt return, punt block looks that they’ll see in a given week. You can rapid fire those things in 10 to 15 minutes at the professional level.”

You as the coach can implement those into practice and meetings right now according to Everett. “Because of the way that the GoArmy Edge app was created, there’s a template of every formation that you could think of,” adds the state champion head coach. “Then there’s every defensive personnel grouping that you could think of. That’s already in there. You copy that book, change your terminology to match what you call it and you can start dragging plays and adding huddles. So, you can get huddles broken, you can get fronts lined up and punt protection.”