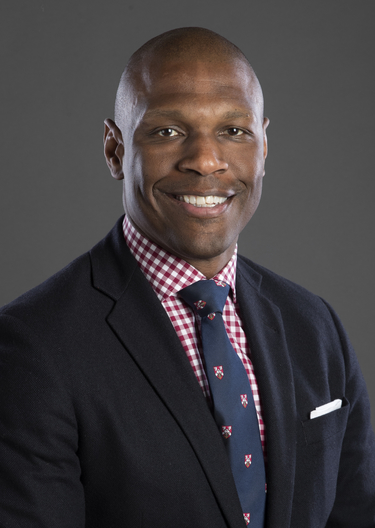 Anyone who has spent even a modest amount of time with Dr. Chris Howard, current President of Robert Morris University, one thing that will become immediately clear is how impressive the man is. When you look at everything he has accomplished, it is staggering in its scope and uplifting to realize all of it is based on a foundation of the game of football.

Growing up in Plano, Texas, it would have been easy to envision him achieving high levels of success in the game of football, as he was a starting tailback on his alma mater, Plano Senior High School, and its state championship winnings squad. Howard achieved success in football and fields few could have imagined. Eschewing traditional recruiting options, he chose a higher path and took his talents and ambitions to the Air Force Academy.

“I fell in love with the idea of being a military officer very early on in my high school career,” Dr. Howard said. “By the time I was a senior, I had been recruited by all of the service academies. My big thing though was that football was going to be a way that I learned to be a better leader, a better manager, and to serve my country. It was going to be a means to an end rather than an end unto itself.”

While a member of the Falcons, Howard earned First Team Academic All-American honors and earned the first-ever William V. Campbell Trophy from the National Football Foundation, which serves as the “Academic Heisman” award for college football. He appeared in three straight bowl games with the Air Force Academy and ultimately earned a place in the Academic All-American Hall of Fame.

“[Playing for Air Force] was difficult, but we didn't know at the service academies,” he said. “All of the cadets are in the same situation. It wasn't like I was the only one taking 18 credit hours, practicing football, and serving in a leadership role. I was right in line with the bell curve with what everyone was doing with their time.”

After graduating from the Academy, Howard earned a Rhodes Scholarship and to attend Oxford University, where he earned a Master of Philosophy and a Doctorate of Philosophy in Politics before going to Harvard Business School and earning his Master of Business Administration degree. All while he was furthering his education, Howard was still serving as an officer in the Air Force. He would serve as a helicopter pilot, an intelligence officer and saw combat in Bosnia and Afghanistan.

“I think having [had football as a base] not only helped me in the military but also in life,” he said. “The attention to detail, the self-discipline, the ability to grind things out all made me a better Air Force officer, but it also made me a better junior executive, a better nonprofit leader. Football helped in numerous ways.”

After retiring from the service after 21 years as a Lieutenant Colonel, Howard tried his hand in the business world, serving as a manager at Britol-Myers Squibb and he founded a nonprofit, the Impact Young Lives Foundation, and worked for General Electric's Corporate Initiative Group. Not satisfied with all that success, he served as the Vice President of the University of Oklahoma and became a professor, as well. Now in his fourth year at the helm of Robert Morris University, Howard can pinpoint one lesson from the game that has helped him every day achieve his goals.

“Mental toughness is something you learn in football that applies to every walk of life,” Howard said. “When you show up that first day of practice, everyone is healthy, the coaches have a game plan in place, and everyone is working toward the same goal. Over the course of a season, there will be injuries, game plans shift, and yet, you still have to be mentally tough enough to stick it out and work for that common goal. You don't have room to whine or grovel or complain. If you're a leader, everyone is looking at you and how you react. Those who succeed have to be mentally tough enough to keep going and push through the adversity.”