Using a Stopwatch in the Passing Game 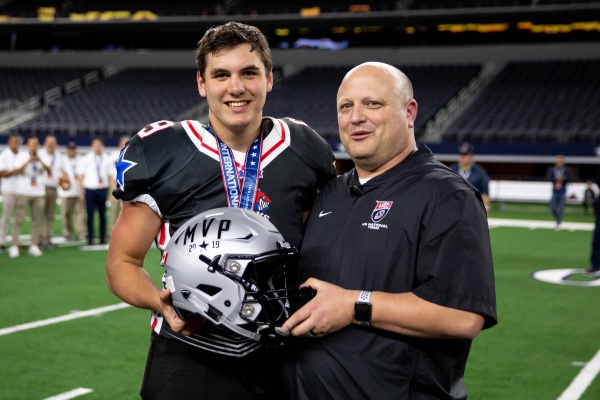 “The Edge” series put together on the Coach and Coordinator podcast is used to point out technological advantages you and your team can use at any point in the season. Those have included Google Forms, virtual reality and phone apps.

Host Keith Grabowski and Rob Everett convened once again to explore another piece of technology that isn’t frequently used in the coaching world – the stopwatch.

While this known commodity doesn’t carry the glitz and glamour that virtual reality does, a stopwatch might be more helpful than a new-age coach might think.

For Grabowski, the usage of a stopwatch began when he was a young coach in the 1990s when he picked up one of Homer Smith’s coaching manuals. Smith served as an assistant coach at programs like Alabama, UCLA and Arizona.

In one of these manuals, “Organizing Pass Patterns,” Smith details the effects of using your stopwatch. “Everything militates against rhythm and passing. You must coach with a stopwatch,” Grabowski reads. The former NCAA Division III coach then continues in his own words. “That’s from one of the most knowledgeable, one of the best in the game, especially in terms of passing who’s saying, ‘You’ve got to coach with a stopwatch.’ I found that to be true.”

Grabowski not only took this away from Smith, but from multiple other coaches in his life who he holds in high regard. “Before I became friends with Dan Gonzalez, I was reading his books. Dan was talking about the calibration of the passing game by tenths of a second,” starts the Director of Football Operations at USA Football. “[I] went on to meet Dub Maddox and all the work he’s done with R4 and the calibration of the passing game. It was really Dan who got me turned on to using it more and more with the quarterbacks and Dub kind of tied in the receiver part of it for me too. To me it just makes a lot of sense to be able to use a stopwatch to understand exactly what’s going on with your passing game.”

Everett then chimes in. “Talking about protection, how long do different things take to develop? Is a certain protection going to hold up with this pass concept that we’re trying to do?” points out the former AAF assistant coach. “Especially on the high school level where there’s the wide range of abilities that’s there. You may have the best scheme on paper, but can your guys actually do it live? And that’s where the timing comes into play.”

Grabowski then cites one of his coaching experiences that can be applied to each and every coach determined to address their timing. “I had the honor and privilege of coaching against Mount Union every single year and one of the biggest things I would look at [was] how long it took them to get to the quarterback,” adds Grabowski. “It really helped us to understand where in the passing game do we really need to look and what did we need to build around those routes.”