Parents Should Decide If Their Kids Should Play Football 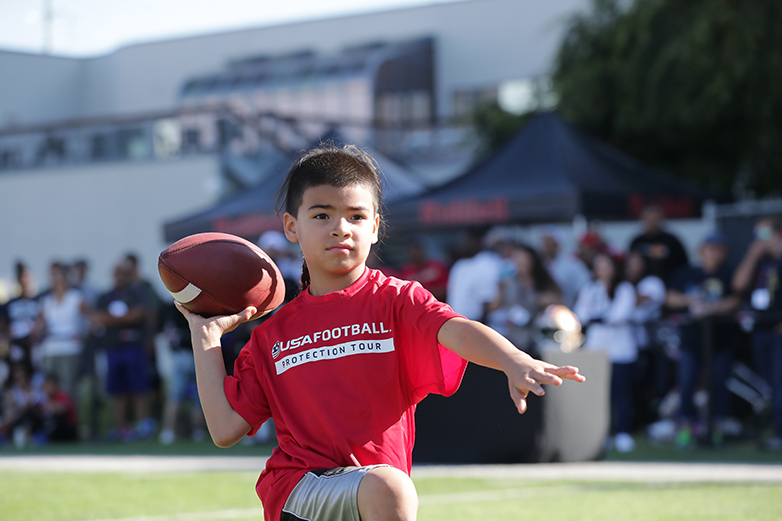 My son Bradley fell in love with football at an early age and started playing youth tackle football at the age of four. There’s been no turning back and after two years of middle school football, he will get his first taste of high school football next year. I’ve written about this in the past, but there are still people who come up to my wife Sheryl and I and say “why do you let your son play football? It’s so dangerous?”

Well, our son plays football because he loves it and wants to. And while I hate to give a scouting report on my own son, I’ll just say that he’s had a lot of success playing center in youth football, USA Football’s Middle School Bowl Game Series and middle school football. While I’ll leave the actual breakdown of his game to the coaches, the fact is that he loves to play and is apparently pretty good at it.

So why should my wife and I tell him he can’t play?

We could, but we love to watch him play. Our hope is that other parents with kids who like to play football will get the same opportunity to make a decision and not have their decision made by politicians or other parents. The choice should be made by the parents whether it’s a yes, waiting until the child is a little older to start or to not play at all.

The truth is that football is a physical game. If we’re going to ban kids from playing youth tackle football due to risks of getting hurt, what’s to stop them from these risks in other sports? Bradley was in a little league baseball game a few years ago when the pitcher on his team went to catch a pop-up and the ball landed square in his face. Later, he had to be taken to the hospital.

Are we banning little league baseball?

Last year, a kid on Bradley’s flag football team suffered a fractured collarbone during a game. There was another boy on his middle school wrestling team that suffered a significant shoulder injury. We know kids that have suffered other injuries in soccer, lacrosse and basketball. There are also kids who have gotten hurt on bounce houses, hoverboards and other popular youth activities.

I get that football is a rough game, but today it’s a safer game. USA Football is stressing Heads Up Football and they’re certifying coaches to teach kids the right way to play football. The helmets today, especially the Riddell Speed Flex that Bradley uses, are using the best possible technology to keep a child or any football player as safe as possible on the field.

Football is a great game and teaches some valuable life lessons like leadership and teamwork, so my wife and I are proud that Bradley is a football player. It’s been our decision to let him play and there’s no turning back now. Let’s keep that decision in the hands of the parents.