USA Football’s Heart of a Giant – Meet the 2019 Finalists 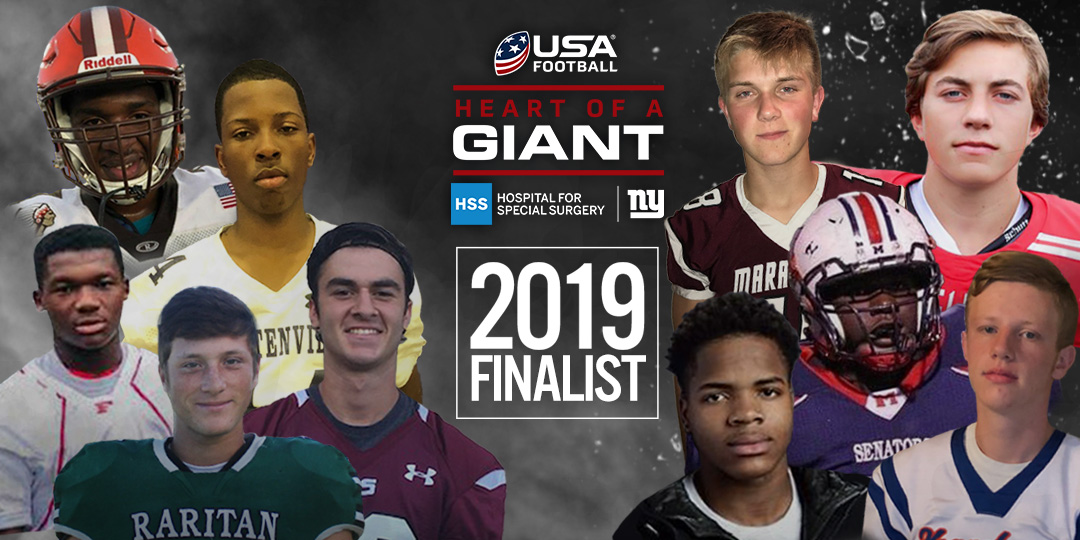 USA Football’s Heart of a Giant award program, presented by Hospital for Special Surgery and the New York Giants, aims to recognize Tri-State area high school football players who demonstrate an unparalleled work ethic and passion for the game.

In November, USA Football unveiled the 10 finalists chosen from 60 nominees, who were selected through an online vote that took place over a six-week span. Each finalist received an $1,000 equipment grant for their school.

Currently, USA Football, Hospital for Special Surgery and the Giants are reviewing video submissions and will announce the winner for the Heart of a Giant award later this month. The winner earns an additional $9,000 equipment grant for their school and will be honored on the field at a New York Giants home game. To learn more, visit usafootball.com/heartofagiant.

Meet this year’s 10 finalists and read their stories below:

Football helps me to cope with the things my parents go through because it helps get my mind off the bad things that can happen,” says Jayvian Allen, defensive back for Freeport High School. Allen’s father is battling diabetes and Allen’s mother got into a car accident a few years ago. When Allen is playing football, his mind is on the game, not anything else. The Allen family loves football and has truly used it as a remedy. “Throughout it all my parents never missed a game and me seeing them there every week gave me hope that we would overcome the things that they were going through,” says Allen. Trainer Kahmal Roy says, “Jayvian has never disappointed in terms of his work ethic, dedication and perseverance.”

After his father tragically passed at work, Richie Arnett contemplated walking away from the game that he had loved his whole life. As he approached his junior season as the clear starter at quarterback, he realized his father could never see the player he has become. After weeks off, Arnett came back to the game he loves and used football to motivate himself to make his father proud. Head coach Mike Brown says, “I admire him for being able to put aside his pain to be there every day with a smile helping everyone, including myself, become better each and every day.”

“About a year ago, I experienced a house fire that I never thought would happen to me. I mean who knew out of all the fires I see on TV, I would eventually be another victim. Football was and has always been a coping method, whether it’s on the field or in the gym, it provided me with a second family and a team that relies on me to do my job and get it done just like I do them. It took me away from all the madness in my life. Nobody else knows the things I really go through besides them.”

Duane Coleman was overweight and depressed, all while watching his mother struggle with addiction. When Coleman wanted to give up, he couldn’t because he felt he still had greater strengths and goals to achieve. Coleman would go on to achieve these goals and find these greater strengths once he joined the Weequahic football team. Coleman says, “That's when my life and joy and happiness started, and I was motivated by losing weight and working hard to become a better person in life on and off the field. The commitment and dedication it took to keep a smile on my face when most kids would have thrown in the towel.” Head coach Brian Logan says once starting the Weequahic strength and conditioning program, Coleman II lost over 100 pounds. Coach Logan says, “He is thriving in school and his community. Duane’s life is better today because of football.”

“There were times I felt like I wasn’t good enough to be in the house and that everything is my fault… There were times I was threatened to get the cops called on me. There were times they (my parents) kicked me out because I messed up. My parents didn’t even want me to come to Tottenville, but Coach Neville helped me get inside,” says Cooper, who suffered abuse and neglect at home that’s currently being handled by the Administration for Children’s Services. “Football helped me escape adversity because it helped me see that there was another way out. I love football and I will do anything to continue playing through my whole life.”

Between excelling as a three-sport athlete, taking six Advanced Placement courses while maintaining a perfect GPA and participating in over four different organizations, one would never know Danny Fiore was unable to read as a young student. Fiore says football was his escape from his inability to read: “On the field, I was different because I was good at it and I understood it. So, I dedicated myself to getting better at playing and to getting better at reading. Football helped me develop confidence and a positive self-esteem.” Head coach Anthony Petruzzi says, “Danny has inspired his teammates in both his friendship on and off the field. He has been recognized as a school leader and a future mover and shaker of our community.”

The summer leading up to Luke Hopkins’ freshman year, he spent countless hours visiting his father in the hospital. Hopkins’ father suffered a serious accident while at work and would go on to undergo countless surgeries. Hopkins says, “In a time of so much pain and confusion in my life, beginning to play football was the best decision I ever made.” Luke has been a rock for his family throughout this trying time, which taught him maturity, caring demeanor and steadfast attention to being a good person and teammate. Head coach Keith Hellstern says, “We received a true diamond in the rough when he arrived as an undersized and quiet freshman. Now, Luke Hopkins is a dynamic senior leader and student-athlete that exemplifies the Heart of a Giant.”

Max Marra faced adversity early in his life when his father tragically passed away in his mother’s arms. One day Marra had a father, and the next day he was gone. However, Marra and his brother continued their tradition of playing football in the backyard, just with each other instead. They played before dinner, after dinner; really any chance they could get a catch in. Marra says, “As I got older, my adversity gave me this incredible motivation.” He became a stronger athlete and an even stronger student. Head coach Daniel Agovino explains, “He is a member of the football and basketball team, serves as senior class Vice President, is recognized as a honor roll student, member of National Honor Society, and has received the American Citizenship Award for his community service.” Marra says, “I poured my heart and soul into football and school and I never used my father's death as a crutch. I decided to turn my adversity into opportunity.”

Louikenson Paul came to the U.S. after earthquakes occurred in his native Haiti. “When I came to the U.S., it was one of the hardest things I have ever had to do,” says Paul. “I lived with my mother for 10 years, and I had come to the U.S. to live with my father. I didn’t know how to speak English and I had no friends, since I left all of my friends in Haiti. I thought they were dead after the earthquake. I wasn’t as close to my father like I was to my mother, so it was rough for me. I was out of shape, I had no confidence, I was fat, I was tall, and then one day in eighth grade, one of the players asked me if I wanted to play football. I thought he meant soccer until he showed me and explained how it works. I said, ‘Yes, I’ll play.’ It was hard for me. I stayed with it and then the summer came. I went to high school and everything moved so quickly. Soon, it was football season. I couldn’t keep up with everyone and I started losing some weight. I started keeping up with everyone. Coach Q told me what I needed to do to get in better shape. I worked hard every day. We had training in the weight room every day, and after training, I would stay after. I would work out more and more. I wanted to be the best, so I had to work harder than the best. Then, my first year of varsity football came, and I did great. I was named to the all All-Fairfield County Interscholastic Athletic Conference (FCIAC) team and was nominated offensive lineman of the year by my coaches. I thought about a lot of things I wanted to be, but I never thought it was going to happen. Football gave me confidence; it gave me friends. Football is the best decision I’m ever going to make.”

“A time I faced adversity was when I was born with cancer. When I was born my mother had to have an emergency C-section. I had what looked like a growth the size of a ping pong ball on my newborn hand, which was open and bleeding. I was transferred from Riverview Hospital to Jersey Shore Hospital because they couldn’t stop the bleeding. From there, I had to be transferred to Children’s Hospital of Philadelphia (CHOP) with my father, while my mother was still recovering. For the first two months of my life, they told me the growth was a Hemangioma, which is a growth of blood vessels. This was until the biopsy came back as infantile fibrosarcoma. I then had to begin chemotherapy until I was 6 months old. This decreased the size of the tumor by leaps and bounds. Unfortunately, the chemo put me into liver failure, and I was on the transplant list for a liver. My mother kept a graph of my liver enzyme numbers and they continued to get better and better. I didn’t need the transplant, but just when things were turning out for the better, they still couldn’t continue with the chemotherapy or else it would’ve happened again. Then, my parents got the bad news that they had to amputate my hand. My mother tells me that even as an infant I was resilient. I was always smiling and happy. I never let anything stop me. Growing up was a struggle but I managed to get through things… It (football) helped me gain a brotherhood in all of my teammates who didn’t treat me differently and treated me as if I was normal. I couldn’t ask for a better team and coaches if I tried. They have truly helped me find myself mentally and physically.”