Football Coach, Not A Kicking Coach 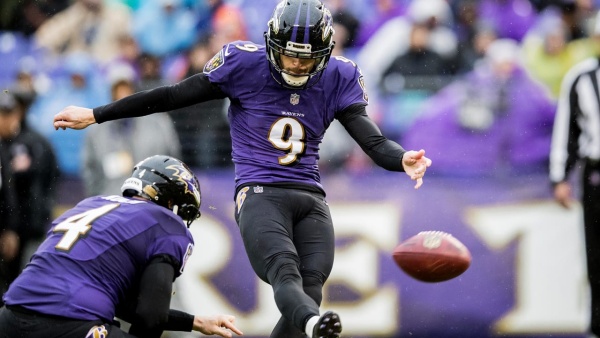 Behind the NFL’s most prolific field goal unit of the past decade (90.7 percent makes) and beyond the long-range mortars of Pro Bowl kicker Justin Tucker, punter Sam Koch and snapper Morgan Cox is coach Randy Brown.

Coach Brown got his start in kicking as a high school All-American at Cherokee High School in South Jersey and went on to become an All-American kicker at Catawba College (N.C.). He was also the first ever soccer-style kicker elected to New Jersey’s All-State team in the 1980s. A man of many talents, he even doubled up as the Ravens kicking coach while being mayor of Evesham Township, N.J. for eight years, making the two-hour commute back and forth to the Ravens practice facility.[1]

One of the original national kicking coaches in the 1990s, Coach Brown got his coaching start by helping various Power Five football programs run their football specialist camps and eventually found his way to the Philadelphia Eagles where he met John Harbaugh, who brought him along to Baltimore in 2007. Now, Coach Brown is a full-time assistant special teams coach for the Ravens who are embarking on one of their winningest starts to a season at 7-2.

Not Just A “Kicking Coach”

Coach Brown considers himself to be a “football coach who happens to coach kickers well,” rather than just a kicking coach.

“In the 1990s I coached at Cherokee High School in New Jersey and did everything: offense, defense and special teams, not just the kicking side of things. I just loved it. It helps you see the kicking game from a different perspective rather than someone who only coaches kickers might.

“There’s got to be nobody else who knows their [specialists’] swing or snap better than me. I’ve seen every single kick they [Tucker, Koch and Cox] take in practice day in and day out. But I’m also a football coach first. We break down film daily, game plan, troubleshoot - you’ve got to see how kicking fits into the bigger picture of the team’s strategy to win.”

Most NFL coaches find their way onto a team roster as either a former college coach or NFL player, and while Brown did have workouts with various NFL teams out of college, he never made the active roster. Yet, Brown doesn’t see that as a deficit. “While pro experience is never a bad thing, sometimes it can make it more difficult to coach another NFL kicker because you are trying to coach what worked for you, which may not work for another kicker. Every specialist is unique, and you got to tailor your coaching to reflect that.”

Dealing with The Weather

While Baltimore is a southern city, it can get just as ugly as New England or as hot as Los Angeles. Building in weather accommodations into each week’s game plan is critical to have success in the kicking game.

“You just can’t hit the same ball in South Florida that you are going to try to hit in Gillette Stadium. One of the more frustrating things is seeing southern specialists recruited to northern universities who just don’t know how to kick well in the cold weather. Kicking must take weather into account.”

Everyone wants to kick in the sun, but football is an all-weather game. In general, coaches should expect there to be a natural drop off in distances a kicker can hit in warm weather verses colder weather.

“The body is just not designed to kick year-round. You need to be diligent in managing your swing load. No kicker should be kicking more than four times in a seven-day period. I would say a 45- to 48-hour rest period from the last time you kick a ball to game day would be best for most. Especially in the high school and college game, specialists need to be disciplined to not kick their leg off as they largely are unsupervised outside of the 15 minutes of special teams period per practice.”

There is no glory in kicking 30 balls the night before a game at a walk-through. While there is no perfect pitch count, the more important thing is that you have one and then stick with it.

“Don’t be a kicker who just kicks. Everything is easier to pick up the better of an athlete you are. Athleticism is the base that everything builds from. Kickers need to be great athletes but punters even more so. Tucker and Koch have got to be some of the best all-around athletes I’ve ever come across and it’s no wonder they hit the ball so well.”

Brown’s advice to younger specialists out there? Compete. Play three sports a year if you love them. Being an athlete is never a liability as a specialist and will only help you become more successful in the future. While you might naturally need to focus a bit more on kicking if you want to play in college, you shouldn’t forget the rest of your athletic development.

How Do You Handle Missing?

“It all comes down to what I call the kick timeline. From snap, to hold, to kick you’ve got to be able to identify where the breakdown occurred. Why would you chew out a kicker who swung well but got a bad hold? Or chew out a holder who had a high snap over his head?”

It also depends largely on the relationship. “I would consider myself as close with these guys as a father-son or brother-to-brother might be.” You simply can’t treat each player the same in the specialist world where you will need to read each situation differently.

What Separates Kickers Who Make It in the NFL?

“Can you kick a straight ball under pressure? That’s it. If you are relying on playing the wind, have a hook or draw to your swing, under pressure those things that you leave up to chance will break down. You need to maximize your quality swings in practice, so it is all muscle memory in a game [that] you don’t even think about it.”