Building a Program by Design: Football in the Age of Enlightenment - Player Monitoring 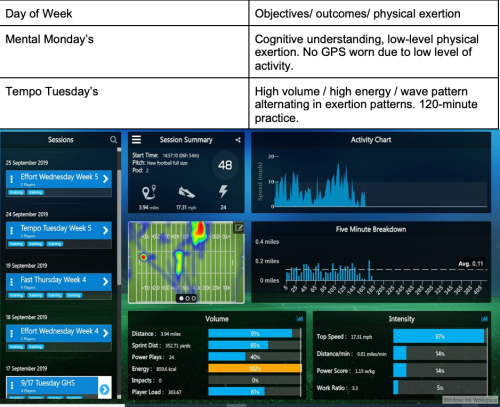 The world has gone digital and technology has engulfed our lives. The game of football is no exception. X’s and O’s are now being replaced with algorithms of 0’s and 1’s. In this series of articles, we will look at how technology is impacting the game of football and changing the way we are able to monitor our players both on and off the field. In the following paragraphs we will take a deep dive into the world of wearable technology, specifically player monitoring GPS systems.

Some of you are already intrigued by wearable technology and its viability in the football market, while others may be scratching their heads and wondering what it is. In short, wearable player technology are small (nugget-sized) GPS sensors that players can wear during practice and games that record a multitude of performance metrics. Anything from total distance, impacts and top speed can be reviewed, synthesized and utilized to create highly individualized practice loads for each player on your roster. Information that was once speculated and ball parked can now be pinpointed and measured to the nearest 100th. The ability to not only get immediate feedback on a player’s overall performance but whether your practice application is aligned with your practice philosophy is an invaluable tool. 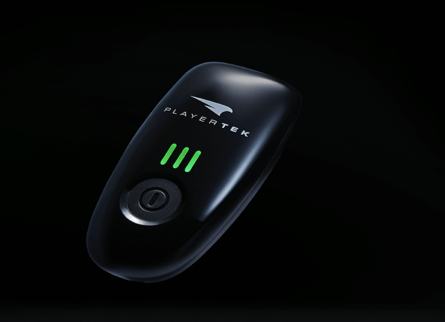 First, it is important to gain a functional understanding of the application of the hardware and software. At St. Charles North, we have 10 pods that we use to monitor our athletes who we deem “high-volume players.” High volume for us would be two-way players at any position, high-impact players such as running backs or wide receivers and players recovering from injury.  Each of these players has a sports vest that they will put on and then insert the pod into the back. Pads can go on over the technology at no discomfort to the players, and from there we can then track every movement, sprint, calorie and yard covered by that player for the duration of the practice. At the end of each practice, vests are turned in and washed while the pods are then hooked up to a computer where the data is downloaded and ready to be viewed and analyzed. The software hook-up is as easy as plugging in a USB and takes only minutes to complete. The idea of having to hire an IT department for such an endeavor, while humorous, is not needed. Below is a snapshot of the interactive data report for a player. 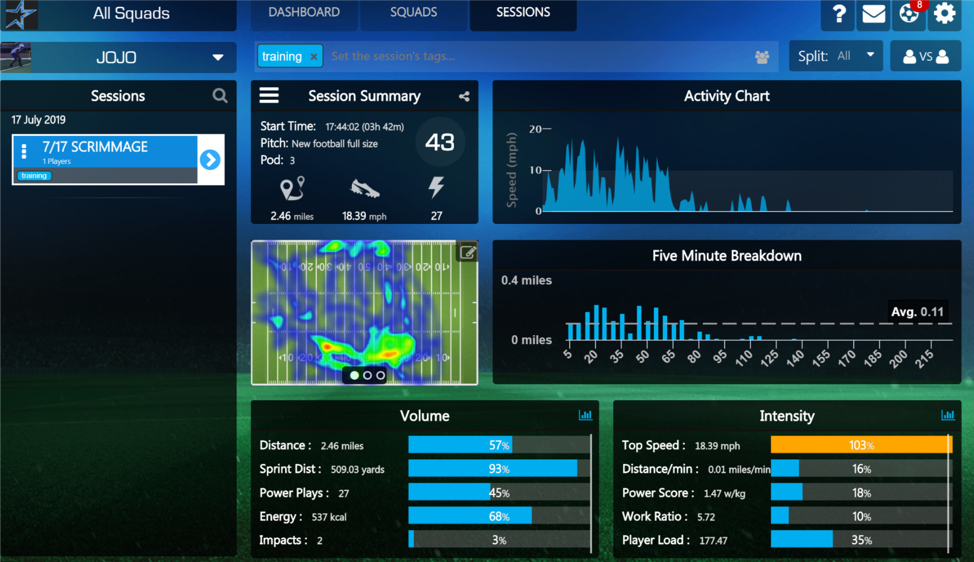 One might say this looks look like a EKG report and in a sense they are not too far off, but when we take a closer look we find that there is valuable information that is the tale of the tape for your athletes’ performance on that given workout, practice or game. It is important to note that each bar graph is based on a scale of typical metrics for a full game. For example, the distance covered was 2.46 miles, which is 57 percent of what a player would cover during a regular game. With that knowledge in hand, let us look at the other data points.

Volume – this series of data points is our sweet spot at St. Charles North. We utilize this data to monitor our player workloads but also ensure that practice philosophy is aligned with application.

Data and analytics are only as good as the production that it yields. In the case of wearable technology, it has taken about a year for our program to be able to truly process and synthesize the findings. Our goal was to first seek to understand. We had to gain a functional understanding of what the workload metrics were for a player both through the course of a week of practice and then in an actual game. By understanding what a player’s work capacity was on Friday night, we were able to compare it to the daily practice numbers. At St. Charles North, we then went back to the drawing board to create a Monday through Thursday practice model that allow our players to have game-like experiences but at the lowest prescribed dose.

We continued to develop our philosophy and belief that we wanted our players to feel fast on Friday night. By using the wearable technology, we were able to develop a plan on paper and then apply it all while getting real-time data that either refuted or supported our daily practice philosophy. I have learned that the weekly practice cycle is fluid and needs to be highly differentiated by player. Without having our players in this technology, I would only be guessing that what I am giving them is best for their health and development. Now, the daily avenue of communication is open between our staff and players. They have a hand in their practice plan and development. The level of trust it has created is essential to building winning a culture.

Below is a comparison of our daily practice philosophy with the data for the same player for each of those days. What we are looking for is if the practice goal matches the analytics. 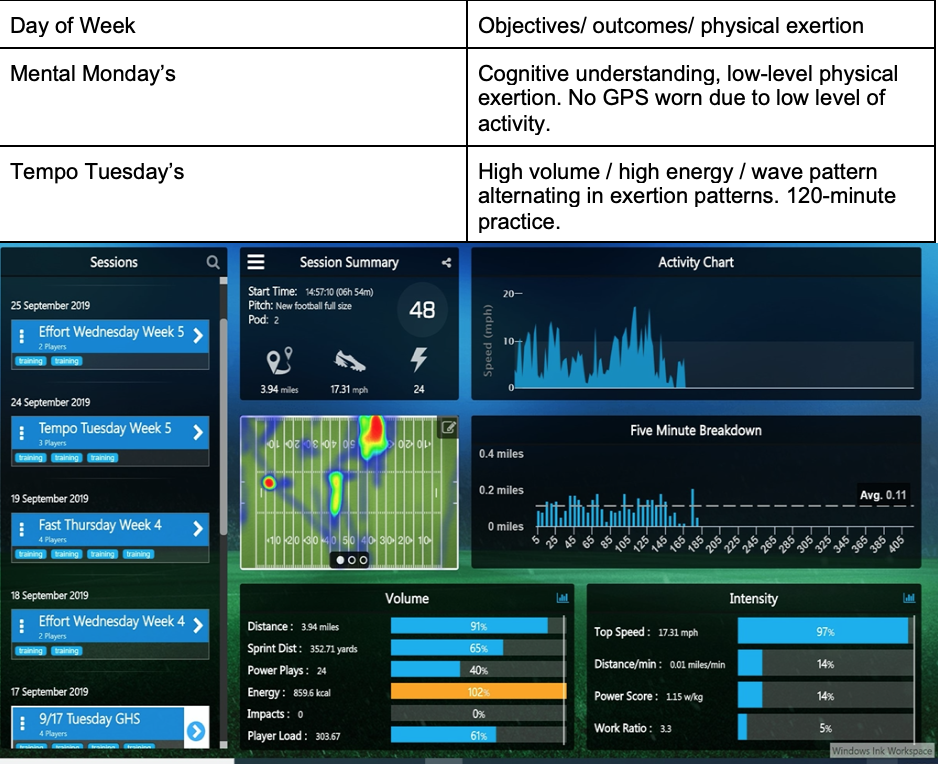 When we look at the data, we can see that energy, distance and player load output are all high due to the amount of time spent on the field (120 minutes). However, what we do see is a great depiction of our “wave” practice pattern. Activity is utilized in bursts with almost full recovery in between. At St. Charles North, Tuesday is one of two full-padded practices, so we expect to see a higher player load yield, as is the case in this particular snapshot. With this in mind, we then plan our practice for this player so that we never compound two heavy player load days back-to-back.

The data supports our goal of lowering the volume of the practice as shown by the reduction in distance, energy and player load. Additionally, when reviewing the activity chart, we can see a higher sustained activity burst but a shorter overall effort. Next, by looking at the overall player load we see a reduction by over 13 percent, which is within our acceptable parameters for this player. 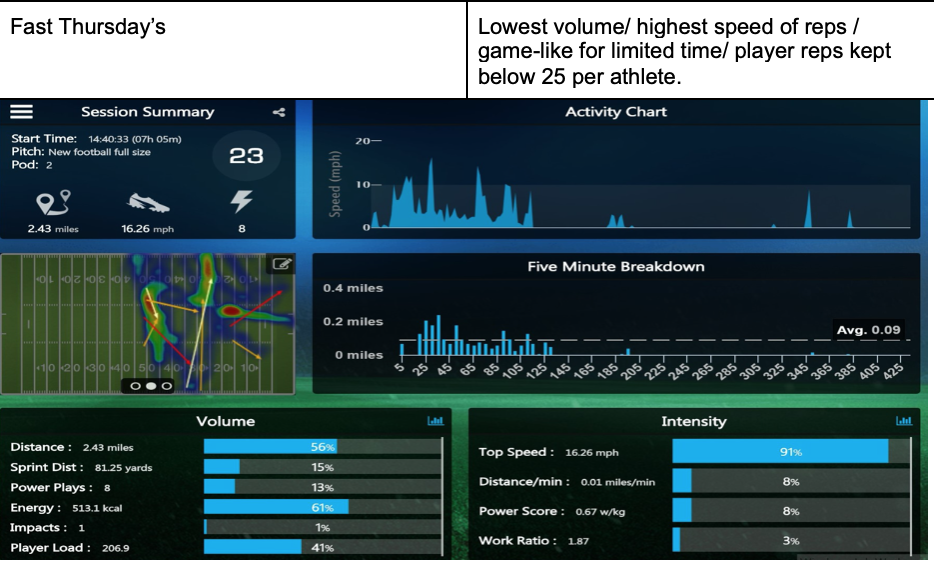 Finally, our Fast Thursday model shows the effects of lower reps and volume of touches for this player. Overall mileage is down significantly along with caloric expenditure and most importantly, player load. What we also see is the effort of reps is still fast and aggressive with top speeds consistent throughout the week and power plays still at an acceptable level of 25 reps. If we look at the cumulative impacts for our player in a three-day span, we can see that his body has taken minimal contacts and should feel theoretically healthy for the game. Obviously, it is not an exact science, but by utilizing data and getting hard numbers, we feel that it has given us a greater control over the health and well-being of our players.

As we stated earlier in the article, the game of football is evolving and now technology is allowing coaches the opportunity to truly put their players first and create a practice model that fits each individual player. There is some expense and there is some extra time that must be spent to benefit from this technology, but when we are talking about the health and longevity of our athletes I feel the pros far outweigh the cons.