Teaching the Quarterback to read Hank 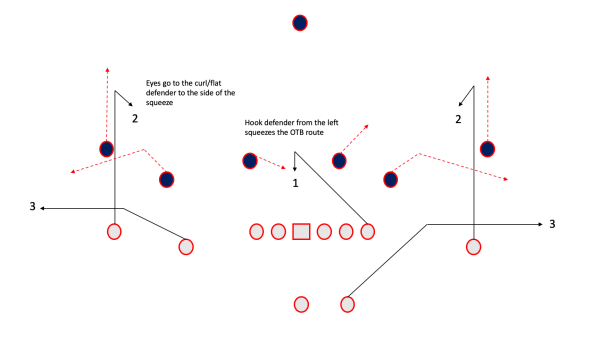 “Hank” is a five-step drop concept. It is designed to beat Cover 3. You flood the underneath coverage defenders with five routes and only four defenders.

Outside Hook – This is a 12-yard hook route. If you get bump-and-run (Cover 1), it is a speed move. You won’t get to 12 yards. Your break will happen at more like 8-10 yards. Win off the line of scrimmage and speed cut on an in-breaking route at 8-10 yards.

Flat Route – Work flat right now. Can work up the field a yard or two but width is the most important thing. Want to get to the flat now to stretch the curl/flat defender.

This is a five-step drop. Your first read is the OTB route. Your movement keys are the hook defenders. If they spot drop out, he speeds up his footwork and gets the ball to the OTB route now. This is a reaction throw from the quarterback. Almost like it’s a hot route. You don’t expect it to be open. You’re reading it to know where your eyes will go next.

The quarterback is thinking five-step and a hitch with this concept, but if both hook defenders drop out, then speed up the footwork and get the ball out to the OTB route now.

So, if the hook defender to the right squeezes the OTB route, work the hook-flat concept to the right. This is so you get a two-on-one horizontal stretch on the curl/flat defender.

If the curl/flat defender gets depth in the curl window, throw the flat route.

If the curl/flat defender gets width, throw the hook route. 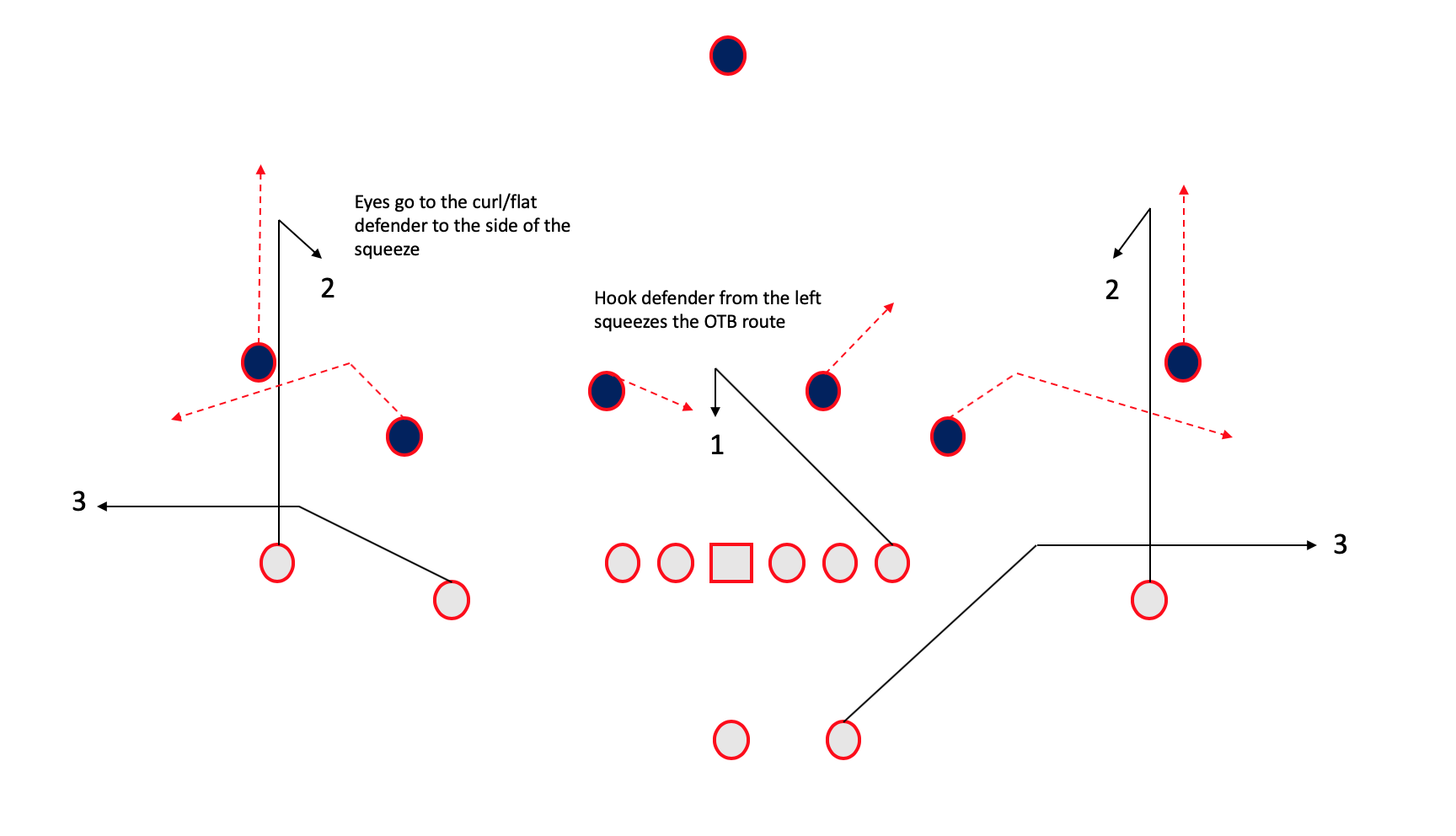 Against quarters this play isn’t great because it is designed to match the concept. The 3RH defender will match the OTB route. When the safety sees the No. 2 is either in or out, he’s going to slide into the curl and rob the curl route of No. 1.

Defenses call this a “Tito” look. Two in, three out, hence the name Tito.

When a safety sees No. 2 in on the OTB route and No. 3 out in the flat, he’s robbing the curl of No. 1. Defenses aren’t stupid. They know what they’re getting when those routes distribute. They’re getting “Hank.”

So, when working against quarters it is important that the hook routes work straight downhill and expect the ball outside away from the safety looking to rob the curl of No. 1.

If you run Hank against quarters, you want to work the side of where the OTB route is coming from. This is because the OTB route will probably hold the safety just long enough to where he can’t rob the curl of No. 1 quick enough. He’ll be a step slow.

The safety away from the OTB has nothing holding him. He sees No. 2 out now, and he can rob the curl of No. 1 immediately. 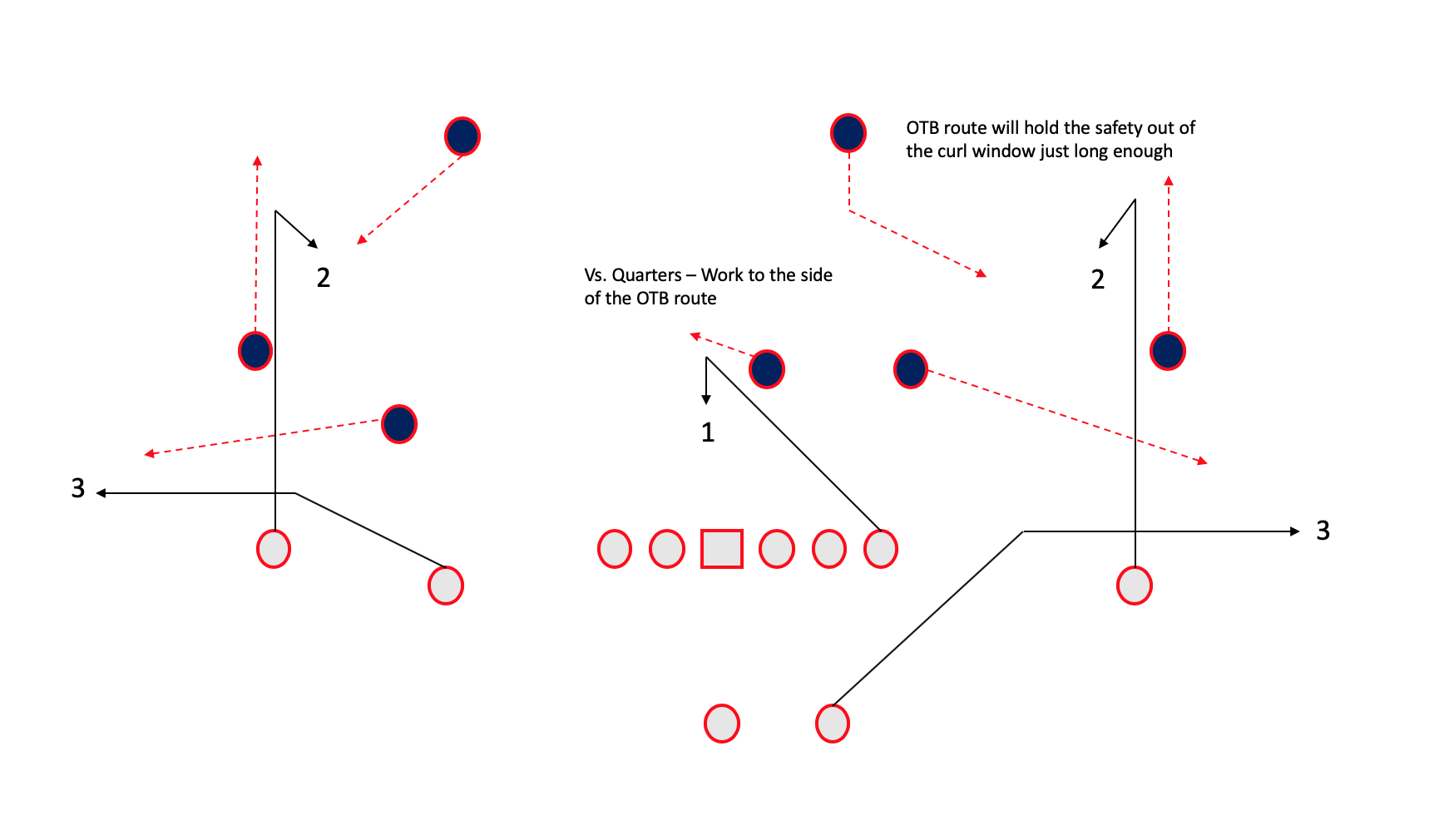 A better play against quarters is this: 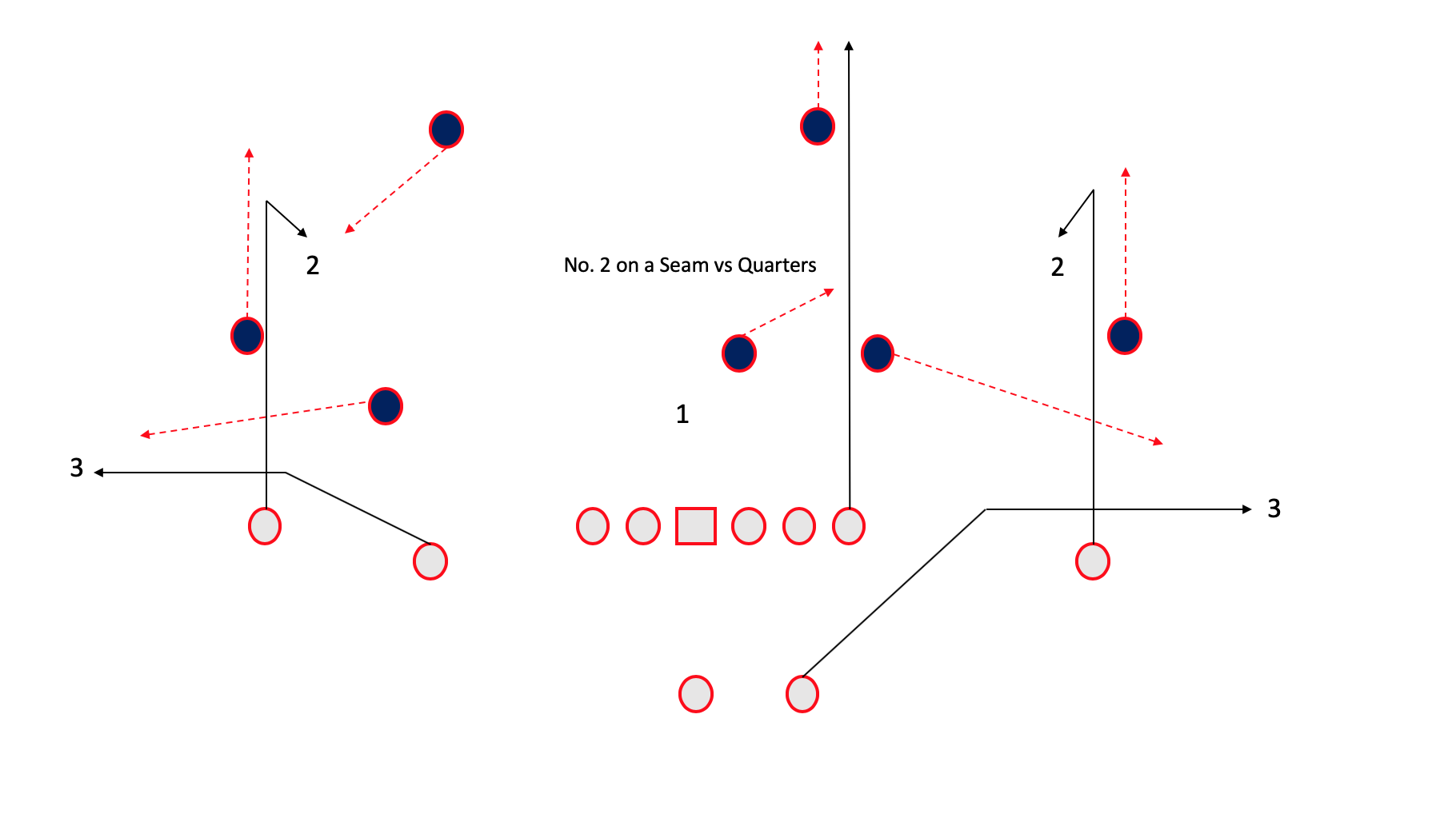 Instead of having No. 2 run the OTB route, send him on a vertical route.

What this does is it gets a two-on-one on the quarter-flat player – the same thing you were looking for in Cover 3 with the curl/flat player.

The safety will play No. 2 vertical, and the 3RH player will play the short wall of the new No. 3 when No. 3 is out.

When calling this play against quarters, the quarterback’s read is hook to flat. His movement key is the quarter-flat player.

What will happen is the quarter-flat player will take No. 2 to the flat. He does not have curl responsibility. That will leave the hook route open.

Hank is not good against Cover 2. The defense has five underneath defenders to defend the five underneath routes. If the defense runs Tampa 2 though, it's not terrible as the coverage turns into a Cover 3 look again. Often times against Tampa 2 the OTB route will be open as the MLB is vacating the middle hook as he is the middle run through defender. 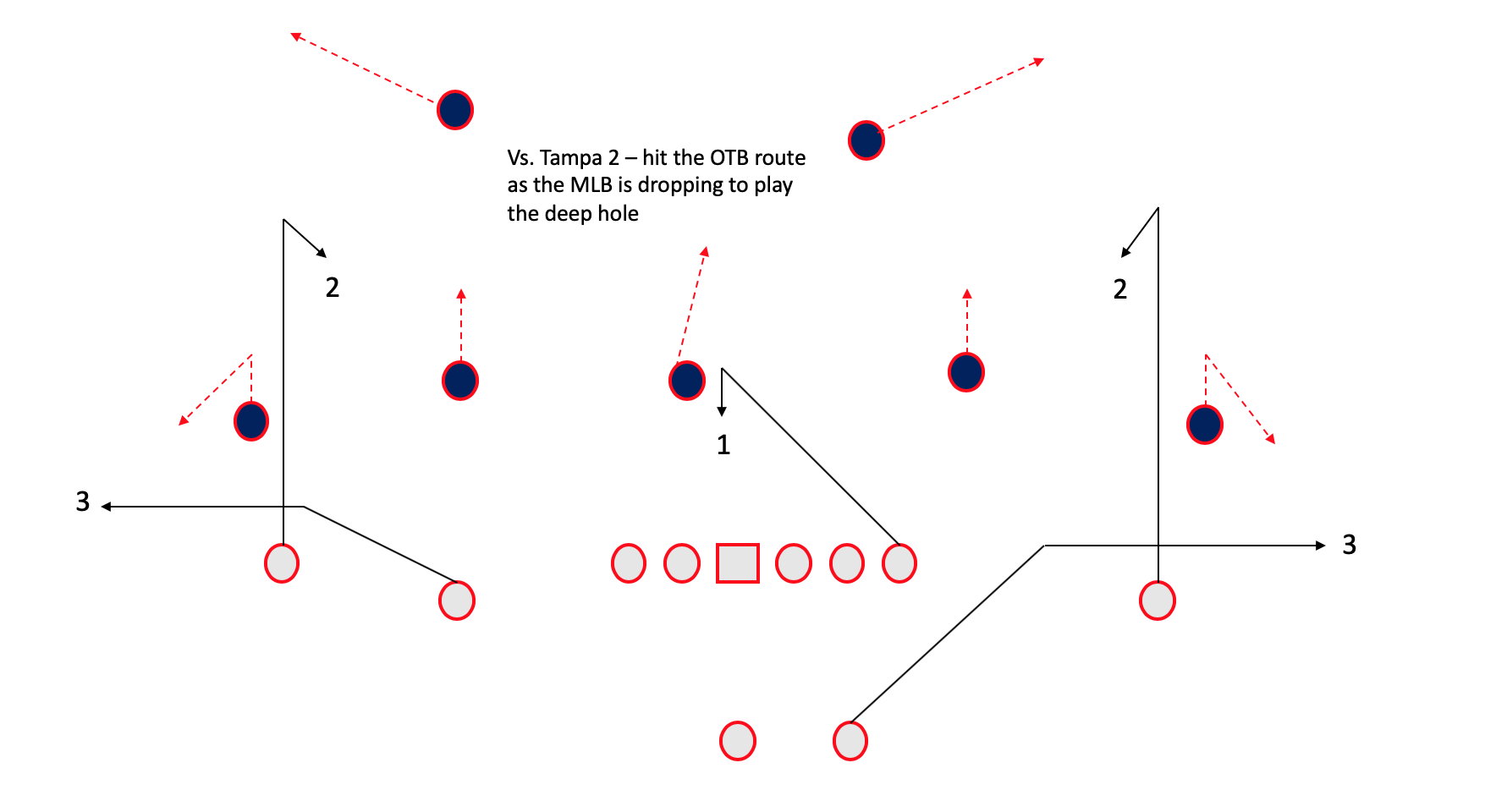 The first clip comes from a 3x1 formation.

This clip comes from New Orleans this season.

New Orleans aligns in a condensed empty formation. Once again, the defense is playing Cover 3.

From the gun, this is a gun + 3 drop for the quarterback. The quarterback takes his 3-step drop, sees the squeeze come from the right, hitches up and reads the curl/flat defender to the squeeze.

The curl/flat defender to the side of the squeeze expands to the flat now leaving the hook route open.

As you can see, when a hook defender squeezes the OTB route it, they will vacate the curl window to that side.

Hank is a great concept that has been around for decades. It’s a simple read for the quarterback that floods 3-deep coverage underneath.

Turn on the TV on Sunday’s and you’ll see “hank” come up a few times every game.