From the Marine Corps to the Gridiron: A Team USA Q&A with Bill Williams 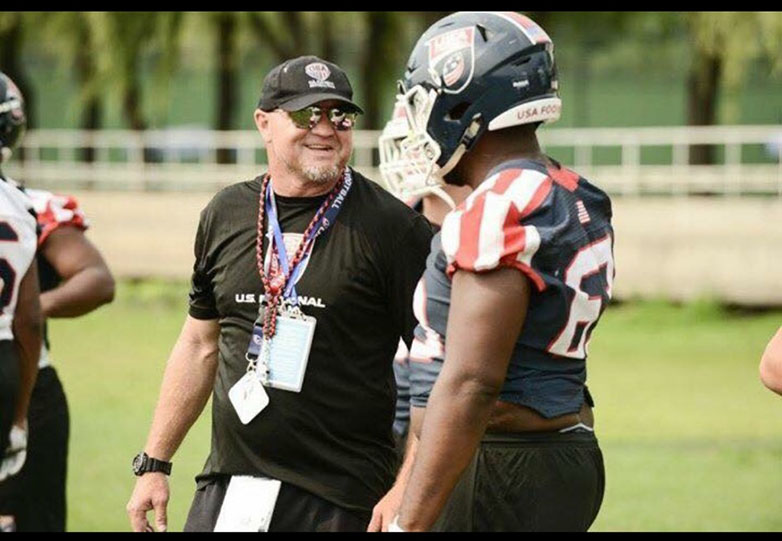 During his time serving his country as a Sergeant in the United States Marine Corps, Holdenville High School Head Coach – and current assistant coach with the United States National Football Team – Bill Williams toured the world and gained invaluable information that would help him in his career on the football field.

A veteran of the Gulf War and Somalia, Williams freely admits that the military brought added discipline to his life at an age when he truly needed it. After leaving the Corps, Williams went back to school, tried his hand at being a rodeo star, and virtually stumbled into coaching.

From the first night he took the sidelines, he knew he’d found his life’s calling. Williams took some time recently to reflect on his career in the Marines, its impact on his coaching style, and what being a part of Team USA has meant to him.

EM: Let’s go back a little bit and talk about playing football. When did you first start playing organized ball? Do you remember why you wanted to play originally?

BW: I started playing football as a little kid. I wasn’t from an athletic family, but I lost my father when I was young and football kind of saved my life.

I played through high school and I was kind of a little wild as a teen and my coach said ‘You know, you have a lot of offers here to play college football, but I really think you ought to go into the military.’ He said I needed the discipline. So, that’s what I did.

EM: How did you decide to enlist in the Marine Corps?

EM: Would you say that having football as part of your background helped you in the Marine Corps at all? Maybe with the physicality or the structure of life in the Corps?

BW: There is a correlation. Football and the military are a lot alike except with football you get to go home! [laughs] I was always athletic, and I thought getting paid to be in shape sounded like a good deal.

EM: So, how would you say that being in the military has influenced you as a coach? What would be the best example of this that you could point to?

BW: When I got into coaching, I thought I was so far behind everybody else with x’s and o’s, but I was ready to be a head coach right out of the military. On the leadership side, I was ready. To me, there was no doubt.

You go through four years of intense leadership training and [I just happened] to go through a war and a conflict. Now, you’re put into a real-life situation – football is serious, but it isn’t life and death. I would say I would be nowhere as good of a coach as I am if I had not gone through the military.

EM: With having served your country in the Marines, does it mean anything more to you to now be a coach with Team USA?

We got this thing we love, football, and everybody can identify with that on some level. Now, you get to do the one thing that you love to do and represent your country doing it.

EM: Last thing for you Coach. What would you say has been your favorite part of the Team USA experience?

To me, [as an example,] football brings everybody together in a small town. Like it brings the band together, the cheerleaders together, the players, the parents, the alumni and it is kind of a signature for your town. Hey, we’re from Holdenville, this is us.

It’s a bigger honor, to me than playing in the NFL. I’m not out there playing for a town; I’m playing for the United States of America and I think the kids are really buying into that.

The photo was courtesy of Coach Bill Williams.