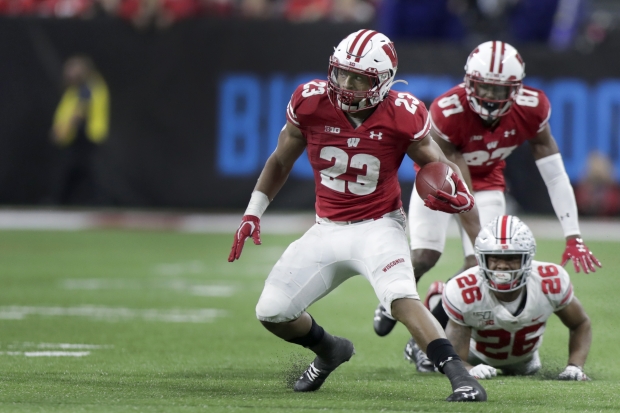 The Wisconsin Badgers and their run game has been a staple in college football since the late 90s when a running back by the name of Ron Dayne shattered the record books. Fast forward to today and the Badgers are still the talk of the nation when it comes to teams who will pound the football down the field on a consistent basis. Wisconsin finished as the 15th best overall rushing team this past season, averaging over 5 yards a carry and over 230 yards a game. While Wisconsin does have arguably the best running back in the country and multiple offensive linemen that will be drafted into the NFL, the Badgers in the run game do some things schematically that most teams across all levels could benefit from having in their repertoire. By implementing simple tweaks such as shifts, motions and letting the quarterback tote the rock, you can expand your run game to a new level.

Wisconsin Badgers offensive coordinator Joe Rudolph implements a ton of motion into his run game to get the defenders eyes off their keys. One thing Rudolph does a tremendous job of is getting motion going back against the grain and making teams defend horizontal stretches from an offense that wants to pound you vertically. On the first drive of the game versus Ohio State in the Big Ten Championship, Wisconsin uses a jet motion from a trips open set back across the formation. They then run counter coming back to where the motion comes from. Ohio State is playing Cover 1, which causes the inverted safety to rotate and the high-hole safety to drop down and cover the motion. Because of this rotation, the Badgers are able to get a hat-on-hat upfront and spring Jonathan Taylor to the third level and into the secondary. Implementing simple motions into your offense can help you dictate the defensive looks you get and manipulate teams into positions they don’t want to be in. It also can get defenders’ eyes off their keys and allow you to get off the ball faster than your opponents.

Another piece of the Wisconsin run game they do extremely well is pair plays up with the motions and hand the ball off to force defenses to respect the motion. Here again the Badgers use a deeper jet motion and fake the handoff to the motion man and give to Taylor on an inside handoff.

Later in the game, Wisconsin uses the exact same look and motion, but this time they hand the ball off to the motion for a jet sweep that results in a big gain. What this does to defenses is it causes them not only to prepare for the motions to get the football, but it forces defenses to defend the entire field. When the motion man is a threat to receive the football, defenses must adjust and make sure they are accounting for the motion players.

Wisconsin is not known for being a big quarterback run team whatsoever. Throughout the history of their program, very few quarterbacks have had the ability to truly impact the game using their feet, but his hasn’t stopped Wisconsin from engaging in the read aspect of the offense. This year quarterback Jack Coan was not a prominent threat to hurt teams in the run game, but the Badgers still had it in their arsenal of plays to use in case the opportunity presented itself. Here you get all three things mentioned in this article: motion, misdirection and a read play. Faking jet sweep one direction and reading zone the opposite, the scheme puts Ohio State into a bind defensively as they attempt to defend the full play. If your offense doesn’t perform any inside or outside zone that is perfectly acceptable. But much like Wisconsin does, attempting to find ways to get your quarterback out in space can pay huge dividends, especially if defenses aren’t anticipaiting your quarterback to keep the ball.

Overall, this is just a small one-game sample size of what Wisconsin has done throughout the years on the offensive side of the football. The Badgers have evolved as a program and don’t just line up and maul opponents up and down the field. Using motion, shifting and play design, the Badgers have created an offensive rushing attack that few programs can emulate regardless of the level. As you begin to look at where you can implement this in your program, start small and continuously evolve your attack.