There are many different ways to play 3x1 coverages. University of Tennessee head coach Jeremy Pruitt details how the Vols defend 3x1 formations from split-safety looks.

The coverage that Pruitt details is known as Quarters, or Cover 7 in Pruitt’s world.

The first coverage Pruitt is going to explain is known as “Stump.”

On the weakside of the formation – the one receiver side – this is a way you can take the backside receiver out of the game. Pruitt calls this “Cone.”

The corners rule in Cone is he is going to line up slightly outside leverage on the X-receiver. If the X-receiver outside releases, you have him man-to-man.

If he inside releases, then the corner and free safety are going to double the X-receiver.

It is a way to take the X out of the game.

The inside linebacker to the weakside of the formation is going to play man-to-man coverage on the running back.

On the frontside of the formation they are playing Stump.

The corner is going to play inside third. The corner has the No. 1 receiver man-to-man unless he is short. Short means he isn’t vertical. He stops, he runs under, etc.

If he is short, then you zone the quarter.

The star – also known as the Nickel – is going to align 1 yard outside and 6 yards off of the No. 2 receiver.

The stars rules are he is a flat player, unless No. 1, No. 2 and No. 3 are all running vertical routes. Then he is going to carry No. 2 vertical.

A Smash call tells the Nickel the No. 1 receiver is short, and the Star will play the flats. He doesn’t have to carry No. 2 vertical anymore.

The inside linebacker to the trips is a “Poster.” That means he is going read run-pass.

If he reads pass, he is going to post No. 3 at 5-7 yards. He is going to try and force the No. 3 receiver go over the top of him. If he goes underneath of the Poster, the inside linebacker will take him man-to-man.

The Poster linebacker has the first inside of the No. 2 and No. 3 receivers.

The routes they are not very good against with this coverage is known as “Mills.” The No. 1 receiver is running a post while the No. 2 receiver is running a dig. That is a quarters beater because the safety is occupied by the dig and now the corner has to play the post in man-to-man coverage.

Another weakness of the defense is knowns as “Arches.” The No. 3 runs a shallow cross and the No. 2 receiver runs a slant. The shallow cross eats up the inside linebacker and now no one is inside to defend the slant route from No. 2 except the strong safety at 10 yards.

Another concept that’s tough to defend is the “Stick” concept: No. 1 is vertical, No. 2 runs a flat route and No. 3 is running a stick route. That flats have been stretched for the No. 3 receiver to be open.

Another adjustment to the weakside of the Stump call is known as “Connie”. This is for when the X-receiver has a tight split.

The difference between “Stump” and “Stubbie” is the field corner is now playing man-to-man on the No. 1 receiver to the trips side instead of his deep 1/3.

The corners in defensive football put the limitations on the defense. If you have corners that can hold up in man coverage, you can do just about anything you want too.

The difference in the coverage as well is for the star.

There is no more “Smash” rule.

The star is still in the same alignment as "Stump".

Nothing changes for the rest of the defenders from “Stump”.

The reason they would like to play “Stubbie” is when they have a dominant corner to the field, and they can completely take him out of the game with man coverage.

The weakness of the coverage? 4 verticals.

Tough for the star to carry No. 2 vertical from outside leverage. 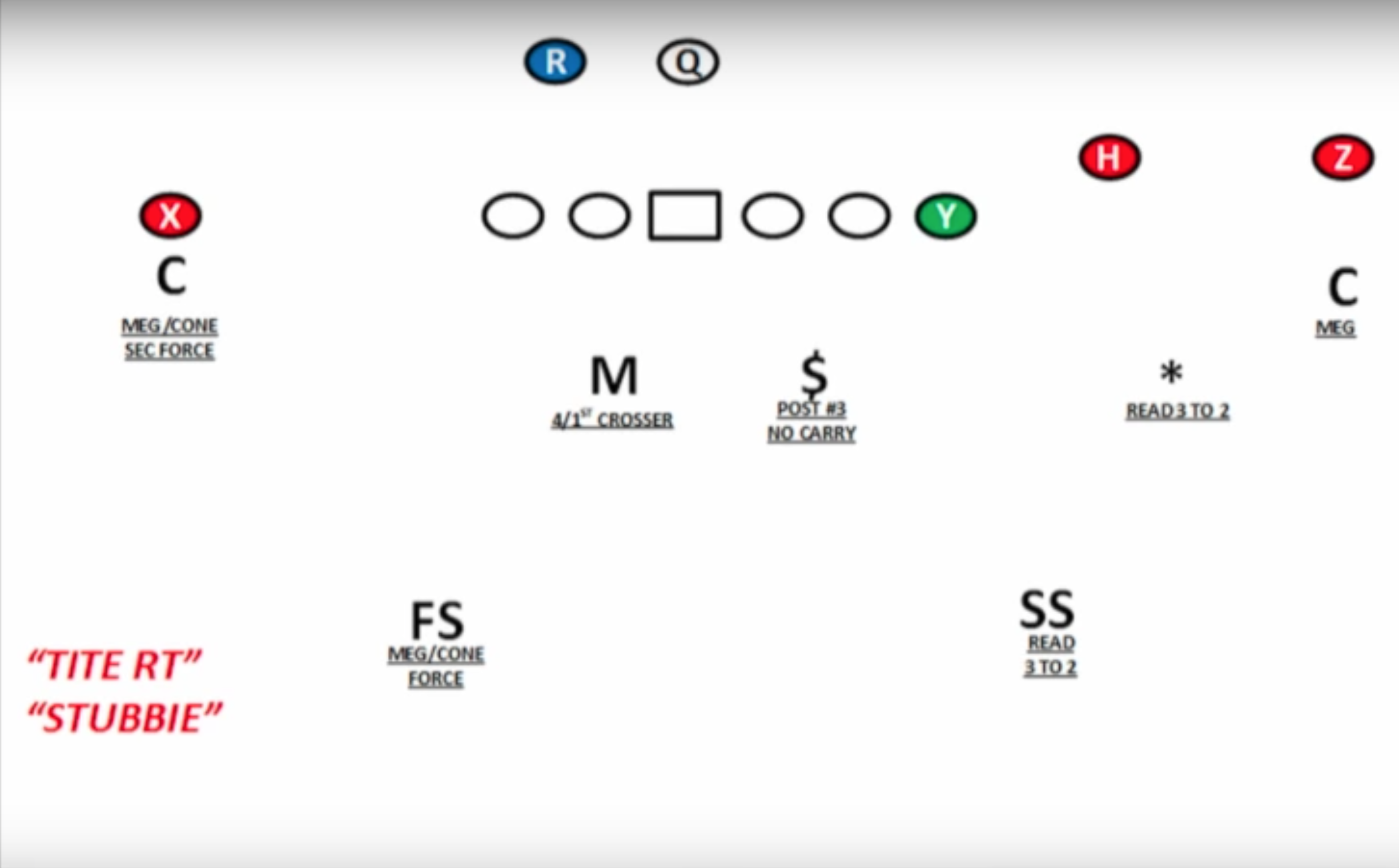 All the routes that are good against “Stump” and “Stubbie” are not good against “Clip”. That’s why they have it in their toolbox.

“Clip” for Pruitt is a form of 3 Cloud. Only difference is Pruitt is man-match defense. They are not zone dropping.

On the weakside they are going to play “Cone” again. If the ‘X’ has a tight split, they can play “Connie”.

To the field side corner – the corner has the flats. He is the flat defender and is going to play it inside-out.

The strong safety has ½ field rules. Any time a safety plays a ½ we tell them to be no wider than 2 yards outside the hash. 18 yards from the sideline. That’s the divider.

When they play “Clip” – and because the corner has moved inside of the No. 1 receiver – they tell the safety he can now cheat to 4 yards outside the hash.

The safety has to be able to the vertical from the No. 1 receiver – but he doesn’t have to be able to handle him until 16 yards down the field.

“Cut” tells the star that he is going to play the No. 2 receiver is man-to-man coverage if he is vertical or runs an under back toward the ball. If he runs out, the star will look to play No. 1 in man-to-man coverage next. If No. 2 goes out, No. 1 is probably coming in on a curl or dig.

The inside linebacker to the trips side is playing the same rules as the star except you are playing it on No. 3. He has No. 3 man-to-man coverage if he’s vertical or under back towards the ball. If No. 3 goes to the flat, go look to cut the No. 1 receiver.

The backside linebacker is man-to-man coverage on the running back. 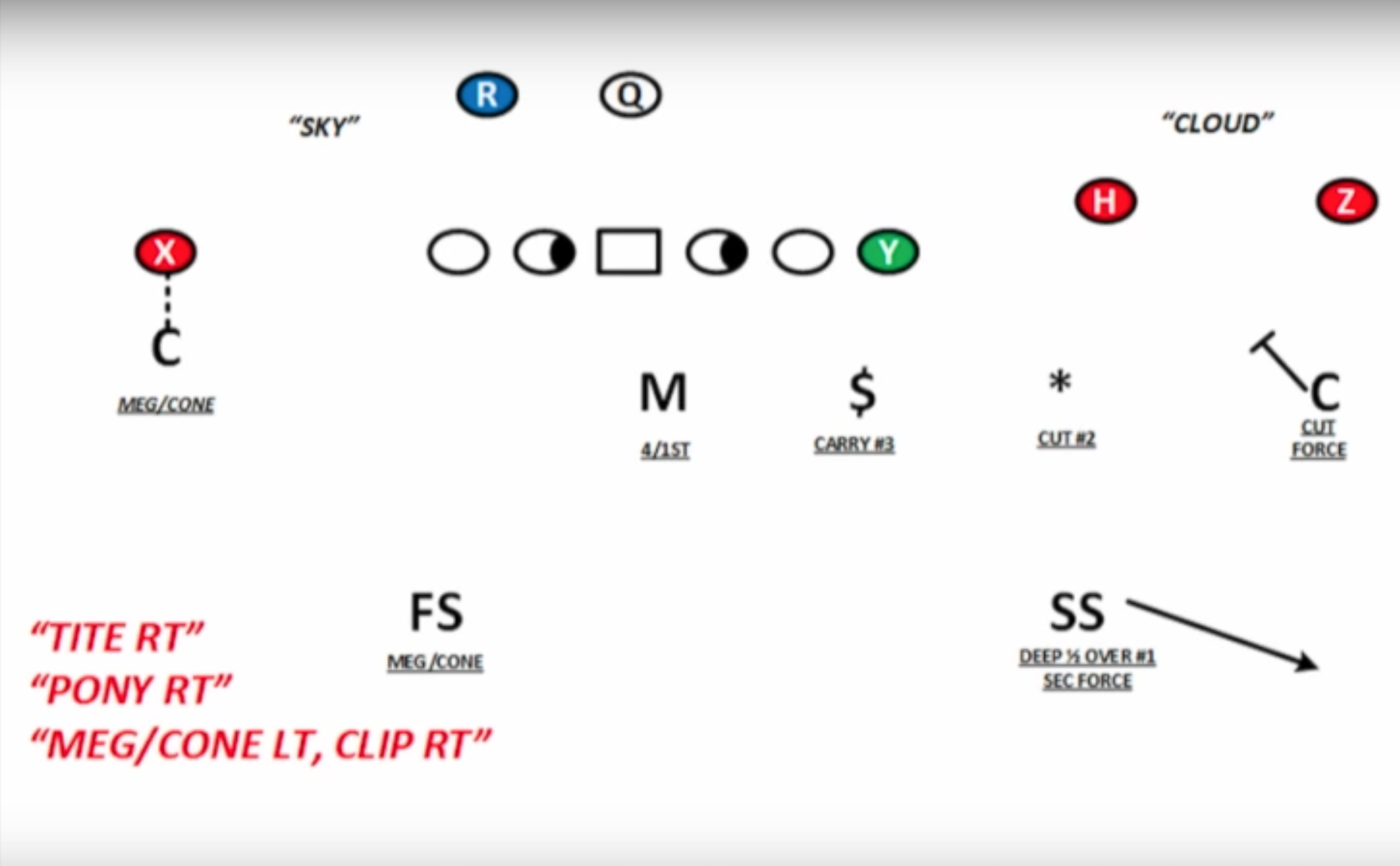