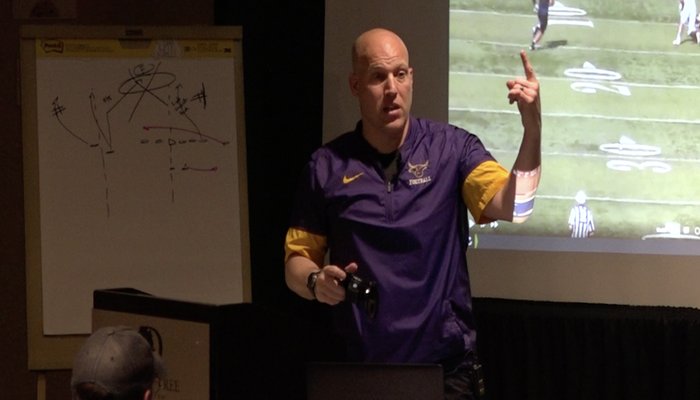 A previous guest on the Coach and Coordinator podcast, Minnesota State University offensive coordinator Joe Beschorner joins the show today to continue our “All In On Offense” series. The 2019 Football Scoop Coordinator of the Year award winner, Coach Beschorner began his coaching career at Minnesota State as an interim offensive coordinator. Soon into his tenure, however, Coach Beschorner’s offenses broke multiple school records. Hear how to utilize your quarterback in the running game, the intricacies of power run plays and more on this episode of the Coach and Coordinator podcast.

5:48 Advantages of quarterback running the ball

8:01 Different schemes for running the quarterback

33:34 Handling the blitz at mesh point

Check out our systems for skill development in blocking, defeating blocks, and tackling at footballdevelopment.com. Follow us daily on Twitter for content and interaction @FBDevCoach Checkout X's and O's analysis at USA Football Blogs blogs.usafootball.com