Football Development Model: How to Get Your Child to Try Football and Why It’s a Good Idea 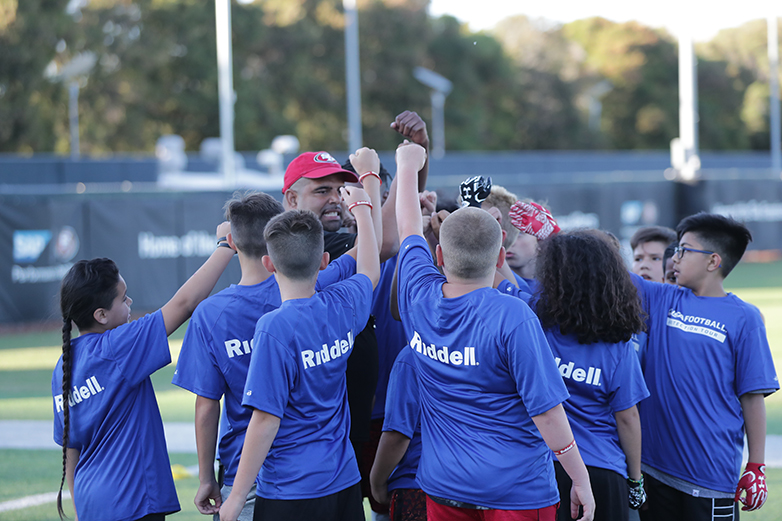 Football is a great game.

It’s fun and as you advance, it gets tough. But it’s a great game and I’m proud that my two sons play it. We also live in a world where there are some parents who will either not let their kids play football or reluctantly do it only to change their minds if they’re not comfortable with it. These days, some parents’ decisions are media-driven, but they certainly have the final say of what their kid can and cannot do. You would hope that the decisions they make are the result of careful consideration along with doing their homework. That’s why USA Football is trying to make the game safer and more fun for all who play with their Football Development Model.

In the case of my wife and me, our decision to let our older son play football came about because we realized that soccer as a fall sport for him wasn’t going to work out. When we broached the subject with him, he was into it because he already liked watching it. Plus, he grew up having two parents who loved the sport and also was around it a lot given what I do for a living.

It didn’t take long for my son to fall in love with the sport and this fall he will take his talents to high school after eight years of youth football, two years of middle school football and participation in the U.S. National Team program. Throughout his experience in football, he has learned valuable lessons about leadership, teamwork, dedication and work ethic – all of which will help him as long as he continues to play as well as in life in general. In my opinion and from the words of so many others who have played the game at the highest level, there is no sport that better prepares you for life than football.

Our younger son has also blossomed into a big football fan and has played three years of flag football. When he was five years old, he surprised my wife and me by saying that he wanted to try tackle football. That kind of came out of nowhere but he was serious that he wanted to play football just like his older brother.

After a few days, my youngest realized that it wasn’t a good fit for him, so he decided that he didn’t want to play. Now, he liked the concept of football and loved to watch and certainly play catch, but he just wasn’t comfortable with the physical contact. Ironically, he was old enough to play tackle football in our town but was still a year away from being eligible to play in the local flag football league. He loves football and I can say without any question that flag teaches the kids many of the same lessons that come with playing tackle. This is where the Football Development Model comes into play. It’s designed to teach the game in a way that meets athletes where they are in their development – at any age and at any stage. Just like baseball players start in Tee Ball and move onto Coach Pitch etc. This works in the same fashion. It believes football should be taught in a progression to create those fundamentals that can be stacked on as the child advances. For my youngest, that meant developing the skills, fundamentals and confidence with flag. He was able to have fun while learning the game!

It’s also a good bridge to tackle because a year or so ago my youngest indicated that he would like to give tackle another try when he gets to middle school which will be in two more years, as he is currently in 4th grade. Through these last few years, it’s quite obvious just how much he has grown into loving football and he could certainly be an example of a kid that just needed a little more time to be ready to play tackle. Not every kid is like my oldest and can jump right into it. It also doesn’t mean that just because you don’t like tackle that you don’t like football. Finding a league and coaches that believe in USA Football’s Football Development Model is key to giving your child success not only in football but in sports in general. After all, kids want to have fun in the sport they’re playing, and you want them to be safe. This achieves both.

It’s important for a parent to understand all of the aspects of football and if you enjoy watching the sport on television or going as a fan, it’s also going to expose the sport to your child. Whether that child starts out with tackle or starts out playing flag, there certainly is a place in a variety of aspects of the game that can be a fit for your child.

Football is a great game for a child to play, but it’s also something that a parent has to be comfortable with. So do your homework on both tackle and flag to make the decision on what’s best for your child. There’s nothing quite like the experience of football and the lessons it can teach your child.

Peter is a sports anchor for the CBS Sports Radio Network, FOX News Headlines 24/7 and WCBS 880 Radio in New York.  His son Bradley plays middle school football on Long Island and is a participant in the U.S. National Team program while his younger son Jared plays flag football.   Peter, his wife Sheryl and the boys are busy cheering on the New York Jets and the XFL’s New York Guardians when they’re not at a youth football field.