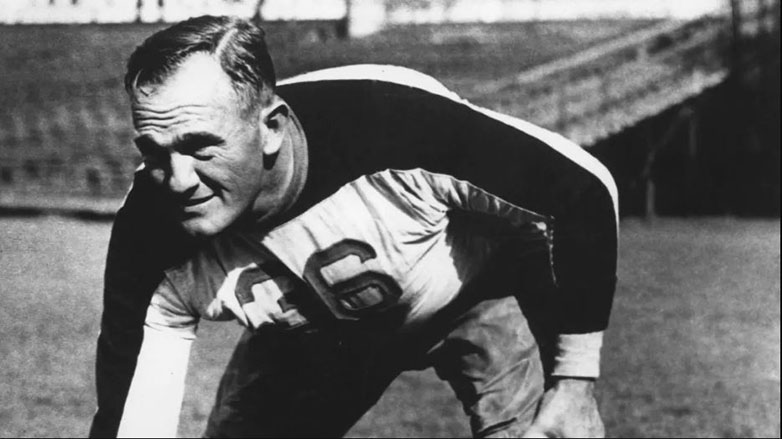 Few people ever achieve true greatness in their field or profession. Even fewer achieve greatness in multiple fields. However, this greatness on multiple levels is exactly what Robert Calvin “Cal” Hubbard attained. As the son of a farmer from Keytesville, Missouri, Hubbard came from the humblest of beginnings to become the only person – to date – to be enshrined in both the Pro Football Hall of Fame and the National Baseball Hall of Fame.

Big and imposing from an early age – it is said that Hubbard tipped the scales at 200 pounds at age 14 – the future Hall of Famer truly found a home in athletics. A star in every sport he played, he would spend one year in nearby Glasgow, Missouri, because that was the only school in the area that fielded a football team. While he was in high school, he also got the first taste of what would be his second career as he served as an umpire in pickup baseball games in his hometown.

“I’m just a big old country boy who hated to sit on the sidelines,” Hubbard said, according to the National Baseball Hall of Fame. “I wanted to be in the middle of the action.”

It was this drive for action that made Hubbard perfectly suited for football. Already an outstanding offensive tackle in high school, Hubbard only got better once he got to college. After meeting Head Coach Bo McMillin, Hubbard signed with Centenary College in Shreveport, Louisiana. While playing for the Gentlemen from 1922-1924, the massive yet athletic Hubbard (he was clocked as running the 100-yard dash in 11 seconds) became the school’s first All-American selection.

He would follow McMillin to Geneva College and played a final season in 1926 after sitting out a year and would help the Golden Tornadoes upset the heavily favored Harvard Crimson in the season opener.

Continuing his playing career in the fledgling NFL, Hubbard would switch exclusively to playing a defensive end on a seven-man line, the equivalent of an outside linebacker in today’s schemes Listed at different times as playing between 6’3” and 6’5” and 250 pounds, Hubbard was a massive man in that era of pro football.

Playing for the New York Giants, he helped make a good defense great and was a key component on the team’s 1927 NFL Championship winning squad. He would take his talents to the Midwest and play for the great Curly Lambeau’s Green Bay Packers. He would win three more NFL Championships in Green Bay, going back-to-back-to-back from 1929-1931.

He stepped away from the pro game in 1933 to become a coach for Texas A&M University before being lured back to Green Bay in 1935 and a final season in New York in 1936 before retiring permanently that same year. He would return to coaching at his alma mater at Geneva from 1941-1942. In 1963, Hubbard would be part of the original class inducted into the Pro Football Hall of Fame. By that point, however, he would be firmly entrenched in his second career.

Beginning with the 1928 season, Hubbard would spend the offseason umpiring minor league baseball. Working his way up the ranks, Hubbard would become an umpire in the American League starting in 1936 and would continue in this role until 1951. During that span, Hubbard would umpire in 1938, 1942, 1946, and 1949 World Series; he also umpired in the All-Star Game in 1939, 1944, and 1949. He helped revolutionize the role of an umpire by taking lessons from football and giving each on-field umpire a defined role.

Following the 1951 season, Hubbard lost the vision in his right eye following a hunting accident and retired active officiating. He would assume a role as a supervisor beginning in 1954 until retiring for good in 1969. He would retire to a small town in Missouri before living out his final years in St. Petersburg, Florida. He would be inducted into the Baseball Hall of Fame in 1976, only the fifth umpire to achieve such an honor.