LSU Pass Game: How the Tigers Revamped Their Aerial Attack 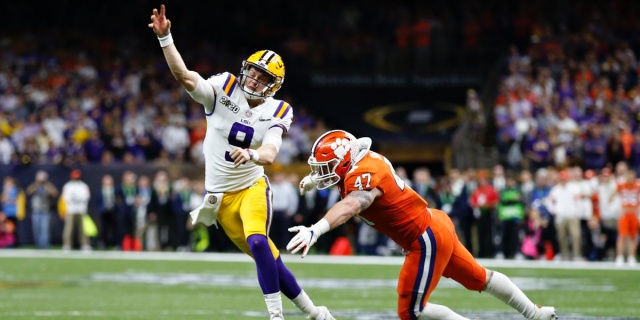 The 2019 National Champion LSU Tigers football team was a team for the ages. Not only did they complete the perfect season, they beat five teams ranked in the top eight at the end of the season, crushed both teams in the College Football Playoff and rewrote the offensive record books all over the board. Thanks to Heisman Trophy winner Joe Burrow and new Carolina Panthers offensive coordinator Joe Brady, the LSU offense will be remembered as one of the most potent offenses in the history of the game.

Throughout the year, the Tigers implemented several things schematically that helped them gain an advantage. In addition, LSU had some unbelievable talent on the offensive side of the football, but there are bits and pieces of the offense that all levels of football can begin to implement to help utilize a potent aerial attack. Here are a few key points from the season that most teams from all levels could utilize to help create a more explosive passing attack.

One piece of their scheme that Joe Brady implemented every game was a concept that he learned from his time spent with Sean Payton and the New Orleans Saints, the T Option. When T Option gets tagged into the route concepts, the tailback releases into the concept and becomes the fifth receiver for the offense. T Option puts one of your best athletes on a linebacker in space and forces a usually slower player to cover someone out in the field. Throughout the season, the Tigers used the T Option choice to maximum effectiveness. Against Alabama at the start of the second quarter, LSU used a T Option route for a big chunk gain. The key to the T Option route is that the tailback can always be right. The tailback feels the leverage of the linebacker and cuts opposite to open space. This clip is a great example of what happens when you match athletes versus lesser athletes in space. This is a simple tag you can add on to routes to help get your athletes matched up in space.

The addition of the T Option route also helped in the quarterback run game. Against the University of Texas, the Longhorns gave a man free look to LSU and Joe Burrow. Burrow after getting initial pressure was able to escape off the edge for a huge chunk gain. Getting five receivers out into the route forces teams to choose whether to pressure or not, and when the pressure doesn’t hit home the quarterback is given the chance to scramble.

Another key component to pair up with their use of the tailback in their T Option routes is how many times they used the running back in their pass concepts when attacking defenses vertically. Again, against Alabama the Tigers ran a three man concept into the boundary and got the tailback wide open for a touchdown. The benefit of using your tailback in the pass game when into the boundary is for a few reasons. First, it is a shorter distance for them to get out into the route and get vertical due to being able to align a hair wider. The other conflict it puts defenses in is flooding the coverage into a condensed space. Accounting for the running back in most defenses is hard enough as is and can stress defensive coordinators out. Having to account for a fast vertical three is something you don’t see often from teams in college football, but LSU made a living out of it this year.

One of the biggest things that cannot go unnoticed when talking about the LSU offense and their passing game is the unselfishness of the LSU running backs to lay it on the line and pick up blitzes on a consistent basis. A sign of a championship team is when star players are willing to do the little things to help their teams succeed. Throughout the season, it was evident that a premium was put on picking up blitzes within the LSU backfield. In the Texas game, the Longhorns were able to get pressure and heat up Joe Burrow. But in crunch time, the backs from LSU made some big-time blitz pickups that helped the Tigers come out of Texas with a big early season victory. If you analyze the tape throughout the year, the excellence continued in the blitz pick-ups. This is something all levels of football can emphasize and stress: even if you aren’t going to be the star of the play, you can still have a major impact on the outcome of the play.

All in all, the LSU Tigers were an explosive pass game offense that lit the scoreboards up across the nation. Through their use of the running backs in the pass game, unselfish play and concepts to attack defenses vertically down the field, the Tigers had defenses across the country struggling to slow them down. All of what LSU did can be incorporated into any offense out there to help create a more dynamic pass game.