Principles of Catching the Football 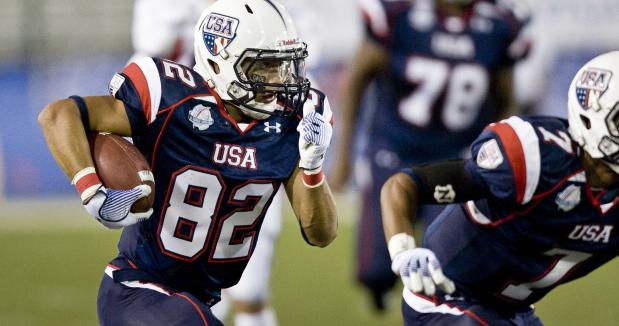 Being a receiver is a critical part of the total offensive concept. Concentration is the first part of being a good receiver. Next, implement learning techniques to fine tune the skills needed. Learn the tricks of the trade, as they say. This can be helpful when it comes down to a one on one competition with the defender. Remember, the completed catch is the only good outcome for any receiver. You, as a receiver, have the innate ability to produce big yardage for the offense.

All receivers must be focused completely on the pressure steps to break during the route itself. Once the route is completed look immediately to catch the football. Look the football into your hands. Like a shock absorber when the football touches your fingers pull the football toward your body to complete and protect the catch. Remember the three-hand philosophy.

Hopefully the receiver will develop the skill work naturally and produce. This should be consistent and fluid to receptions.

From the exact time the eyes pick up the football in flight till it is secured concentration must be maintained. Remember concentration is the key to success.

Next issues for all receivers:

Remember you as the receiver is usually the fastest person on the football field. Fight for the football and accelerate at all costs.

In closing, use film work to learn the coverages and how to attack each by strengths and weaknesses.