Be Uncommon: The Pioneer Philosophy 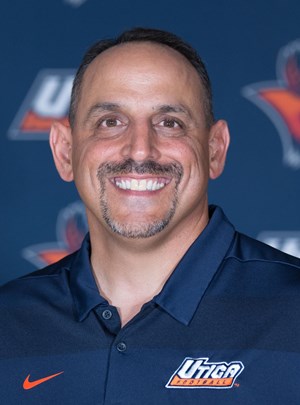 In New York State, it is not uncommon for a head high school football coach to also serve as a coordinator as well as a position coach. For many programs, this is the way things are done.

It is far less common in the college ranks for the head coach to serve as a coordinator as well as a position coach but that aligns perfectly with Blaise Faggiano’s entire philosophy. Coach Faggiano serves as the Head Coach, Special Teams Coordinator and Defensive Line Coach and while this approach is uncommon, so is the culture that he is deliberately building at Utica College.

While there are only about 140 miles between where Coach Faggiano’s football foundation began at Rush-Henrietta High School, located just outside of Rochester, and Utica College, located nearly midway between Syracuse and Albany, the stops that Coach has made along the way which include Ithaca College where he played and was a part of a Division III National Championship in 1991, Albany, and Saint John Fisher, contribute to a wealth of New York State Football experience. His network is vast but tightly knit and he is rooted in a philosophy that contributes to the identity of football in the Empire State.

When it comes to the culture that is being established at Utica College, the goal is to be uncommon. Players, coaches and all those that find themselves within the proximity of the program should fear one thing: being average. In addition to football and academic responsibilities, Utica players are expected to participate in community service endeavors, play for one another, not simply with one another and hold each other accountable. Faith, Family, Academics and Football are the hierarchy of Pioneer priorities.

If the life expectancy of every team is only a year, much work is required in establishing the capacity for leadership and getting the most out of players, coaches and the team on a consistent basis. Coach Faggiano believes that it is as important to develop leadership in his leaders as it is to develop the eyes of defensive linemen or the feet of quarterbacks. To his point, how often are captains simply named captain and left to fend for themselves as leaders? The goal at Utica is to develop leadership as any other skill would be developed.

Individual leadership as well as the bonds that exist within position groups and within the team as a whole are also areas that need to be addressed. The UC staff works hard to present the team with opportunities to get together in non-football capacities. Whether it’s a night out at the bowling alley, an off day during training camp spent at the water park or a Wednesday night women’s hockey game on campus, the Pioneers are urged to put their phones down and their playbooks on the shelf to simply enjoy one another and have fun. In a league and a division that sees a similar talent pool, Faggiano believes that the difference in wins and losses often comes down to team chemistry and the bonds created along the way.

Coach Faggiano’s involvement in aspects of the team that don’t traditionally fall to the head coach help to stress the importance of every role on the team. Football is a game that has a place for everyone. Each team needs a second-string guard, a long snapper and a quality control manager. By coordinating the special teams, emphasis on the third phase of the game is present. It doesn’t stop there. Time is not just set aside for special team units to work together to solidify schematic awareness. At UC, special teams individual periods create opportunities for players to hone the skills that are necessary for them to be successful in their roles on given units. If various teams require blocking, pestering and catching footballs from different angles, it makes sense that those skills should be worked on. Utica led the country in punt return yards allowed which was in the negative in 2019 and their goal is to gain one to two first downs on kick returns and punt returns. To accomplish these goals, the time is necessary. Special Teams Indy also allows the entire staff to get involved with players from different skill sets creating more buy in from all involved.

Buy in can be manufactured in several ways. Many teams do this with offensive personnel packages, but the Pioneers take this approach defensively as well. They have found that the ability to boast that twenty some players play for their defense in games on average has made a difference from a recruiting standpoint. Young players may find a spot sooner than they think as the number of available playing positions is almost double what the standard best 11 will play approach affords.

It’s evident in hearing Coach Faggiano speak or even spending a few minutes with him that his all-encompassing approach is a bit uncommon. He doesn’t just talk about it; he embodies his philosophy. Success is not solely measured in final scores and win/loss records. Success is also measured in alumni golf outing conversations and by successful professionals that return to address the team during Homecoming Week.  The culture of Utica Football is uncommon, the leader of the program is uncommon and it’s the commitment to this notion and the fear of being average that have paid dividends and helped to establish a unique culture at Utica.  The heartbeat at the center of the state of New York is strong and the energy pulsing through the Utica College Football Program is palpable.