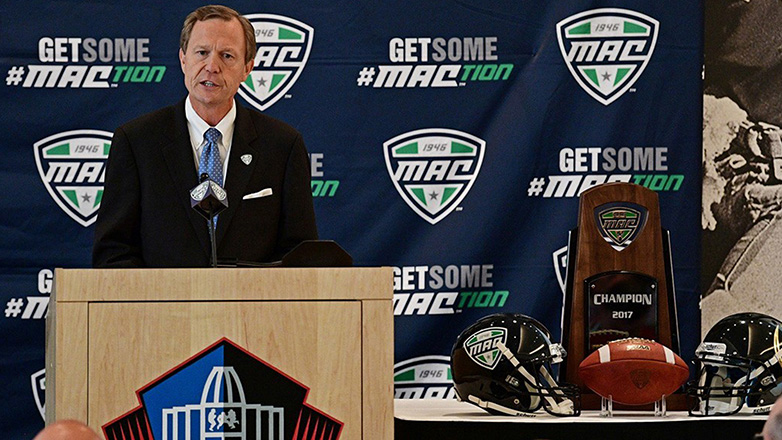 Since 2009, Dr. Jon Steinbrecher has served as the Commissioner of the Mid-American Conference (MAC). In that time, he has helped grow the MAC to be one of the top non-power five conferences in the country by expanding the bowl opportunities for the Conference, increasing its television revenue and exposure, and securing a $1 million grant for the Cleveland Metropolitan School District over a five-year period to focus on teacher recruitment, mentoring and retention.

He has been a true leader and a true force for good in the world of college athletics thanks to a career that has spanned multiple decades. His path to success can be traced back to beginnings on the gridirons of Indiana and under the tutelage of his father, long-time coach, and now-retired Valparaiso Athletics Director Bill Steinbrecher.

“My father, when I was really young, was a football coach at Valparaiso and I would always go to his practice,” Steinbrecher said. “I started playing organized football in sixth grade. I always loved the game. It’s always been a part of my DNA. I was largely a defensive back, so running, hitting, avoiding people, some of the basic parts of the game, that’s the stuff I really loved.”

Steinbrecher would continue the family legacy by earning a scholarship to Valparaiso, where he would become a stellar defensive back while also being a part of the school’s tennis team. He would excel at both sports and would, later on, be rewarded by his alma mater by being bestowed the school’s Alumni Achievement Award in 2006 and be inducted into the Valparaiso University Athletics Hall of Fame in 2014.

“I was originally going to go to another school before my dad became Athletics Director there at Valparaiso,” he said. “That’s the school I really wanted to go to and play at anyway, so it really worked out. I stayed busy while I was there, for sure. I was a double major, I played two sports, and I had a work-study job at night. I just loved participating in sports and both of them really taught different things. Football is kind of the ultimate team sport. It’s highly regimented. It’s planned down to the minute. Tennis is an individual sport parading as a team sport. I thought both meshed together really well. I think playing both kept me healthier and made me a better, more well-rounded athlete.”

As he was nearing graduation, Steinbrecher knew he wanted to continue being involved in sports. The nascent field of athletics administration was just being formed and he jumped at the chance to be involved in that manner. He would earn degrees in journalism and physical education at Valparaiso before earning his master’s in athletics administration from Ohio University and ultimately his doctorate from Indiana University in physical education. He was able to translate all of this and couple that with his athletics background to first lead the Ohio Valley Conference before taking his role with the MAC in 2009. 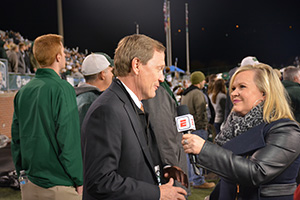 “One of the great joys of my jobs is the great breadth and width of the sports I get to oversee and to see the skill and the passion that all of the coaches and players bring to them,” he said. “I was fortunate that I had someone in my house when I was growing up who was a coach and an athletics director. I’ve lived on a college campus and I think I have a good sense of the rhythms of a college university. I’ve always had a pretty good sense of the mindset of coaches and administrators. Then, I can think back to my playing days and think about what was important to me. I’ve always carried that and have been able to pair that with the experiences that I’ve had in interacting with players and coaches and administrators. I’ve been able to learn from all of that and I hope that has made me better at what I do.”

One cannot argue with the success that the MAC has achieved under Steinbrecher’s tenure. It has become a premier conference in the landscape of college sports. The “MACtion” slogan has become one of the most recognizable brands in all of college football and the conference has seen remarkable growth under Steinbrecher. Ultimately, he has been able to credit some of the lessons he learned on the football field with helping him to achieve some of his biggest career goals. 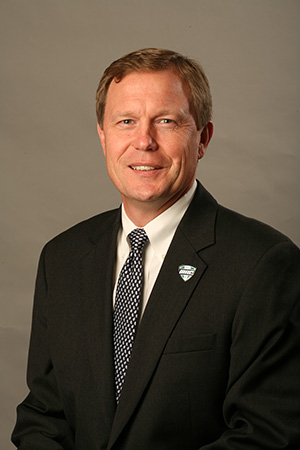