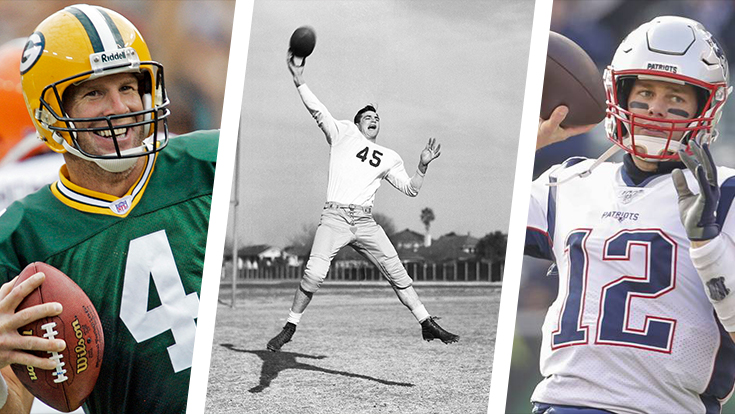 Hall of Fame quarterback Brett Favre’s first NFL completion was to himself. On Sept. 13, 1992 against the Tampa Bay Buccaneers, Favre’s pass deflected off a defender’s helmet and landed right back in his hands. Favre lost seven yards on the play.

Favre only caught one other pass in his career, a two-yard loss in 2009 for the Minnesota Vikings.

Tom Brady put forth one of the best quarters of football in 2009 against the Tennessee Titans by posting five touchdown passes in the second quarter. Brady found Randy Moss and Wes Welker each twice and Kevin Faulk once for a total of five touchdown strikes on a snowy October day at Gillette Stadium.

The Super Bowl-winning 1985 Bears and 2000 Ravens are among some of the best defenses in professional football history, but perhaps no defense tops the 1920-21 Akron Pros. The now-defunct team from Akron, Ohio had a 13-game shutout streak spanning the entire 1920 season and continued it into 1921. The Pros captured the NFL’s first league championship in 1920.

Football has changed in the last 100 years with more offensive-heavy play, but the Pros’ remarkable streak is near impossible to match.

2003 NFL Draft: Time marches on, but Vikings land a gem

The Minnesota Vikings were supposed to select seventh in the 2003 NFL Draft, but ended up with the ninth selection after two teams took advantage of the Vikings’ clock expiring. Minnesota was working on a trade to swap picks when the clock expired. The Jaguars handed in their card immediately to draft quarterback Byron Leftwich and the Panthers also pounced and selected offensive tackle Jordan Gross.

The clock ultimately clicked well for the Vikings, however, as their selection at No. 9 overall was defensive tackle Kevin Williams, who played for 10 seasons for the team, starring in six Pro Bowls.

Sammy Baugh does it all

The late Washington Redskins quarterback, punter and safety “Slingin’” Sammy Baugh is the definition of football versatility. In 1943, Baugh – a member of the Pro Football Hall of Fame’s inaugural Class of 1963 – led the NFL in passing (1,754 yards), punting (45.9-yard average) and defensive interceptions (11)!